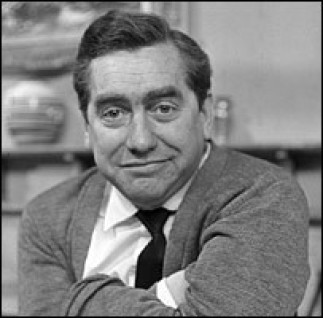 When he heard of Tony Hancock's death, Kenneth Williams, who had worked so closely with Hancock a decade previously, wrote a very harsh but fascinating entry in his diary for 25 June 1968:

...Tom Sloan went on television after the news and talked about Hancock as a 'Colossus of Comedy' and a crapulous eulogy about 'original clown - wit and invention' etc. etc. No one saying the real truth - an indifferent performer saved by two of the most brilliant scriptwriters of the decade, Galton and Simpson, whom he rejected. Thereafter, it was all downhill.

How accurate is this? Debates have been ongoing now for over 50 years as to who should have the credit for 'Hancock' (the performer, as opposed to Hancock the man). I was introduced to Hancock by my grandfather, who loved him and talked about him in reverential tones. However it wasn't until the mid-80s, when there was a sort of Hancock revival, that his claims could be put to the test. He was perfect, and I watched, and listened, to as much Hancock as I could get hold of, joining the Tony Hancock Appreciation Society for a while.

The problem for Hancock fans is how to explain away the undeniable decline in his work after he parted from Galton and SImpson, and in a way these two films - one scripted by them, the other not - give a clue to the decline. 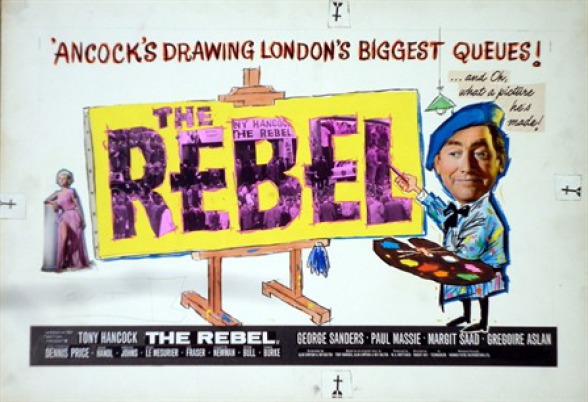 Strangely, the two films are in some respect the wrong way round. One would think that The Punch and Judy Man, a low-key film in a recognisably realist setting, where in effect Hancock plays himself (or rather his on-screen persona) would have been the first, and written by Galton and Simpson, with The Rebel, following on, would have aimed far more at the international market and been looking to do something new. Of course, The Rebel came first, with his usual scriptwriters in place, and Hancock playing Hancock, albeit a slightly more expansionist version of himself.

"Oh, you temptress! Oh, you voluptuous jezebel!" - Aphrodite at the water hole

The Rebel (1960) holds up quite well, but that is mainly because the weak scenes have been forgotten, and the good ones remembered; it also has to be said that some of the better scenes are rehashed from 'Hancock's Half Hour'. Hancock plays himself, but this time as a struggling artist who has a dreary 9-5 job to pay the bills. Early on in the film, he has had enough (or rather his landlady, Mrs Cravatte, has, who has been transformed from his housekeeper in the TV series to his landlady now, and is played not by Patricia Hayes but by Irene Handl).  This scene shows Hancock battling Mrs Cravatte over his sculpture: 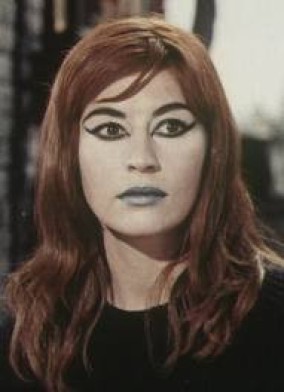 He goes off to Paris to find inspiration, and meets up with Paul (Paul Massie), an English artist also struggling but who, although he does not realise it himself, is a gifted artist. Hancock is hopeless as an artist but becomes feted by the in-crowd, in some of the best scenes in the film; one in particular involves Nanette Newman as Josie, an existentialist ("oh, one of old Jean Paul Sartre's mob heh?") and she gets the best line - "Why kill time when you can kill yourself?". This is easy stuff for G&S: "All my friends are existentialists". "Yes, well it's company for you isn't it?" but effective none the less.

It has to be said though that Hancock and G&S had already done this, in a very funny radio episode called 'The Poetry Society'. Nevertheless, although the targets are easy, they still have to hit them, and they do so effortlessly when Hancock gets invited to an existentialist party: 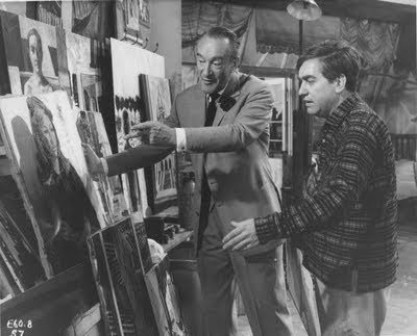 Hancock gets taken up by an art impressario, Sir Trevor (George Sanders) and becomes rich and famous - although it is all a mistake, the paintings Sir Trevor enthuses over are in fact painted by Paul, who has returned to England (and taken Hancock's place in his room, and taken his job as well...). This leads to some amusing posturing by Hancock, but also unfortunately to some very tired and tedious scenes on board a rich man's yacht, who is planning to buy Hancock's (Paul's) paintings. The film ends, inevitably, with Hancock back in his room, still trying to finish his sculpture 'Aphrodite at the water hole'. The film did quite well at the box office but tellingly didn't do so well in the US, where it was retitled 'Call me Genius' (due to there already being a TV series there called 'The Rebel') which backfired as it seemed to antagonise the American critics, although I suspect they would not have been well disposed towards the film and towards Hancock anyway, and Hancock moved on, bizarrely, to The Punch and Judy Man. 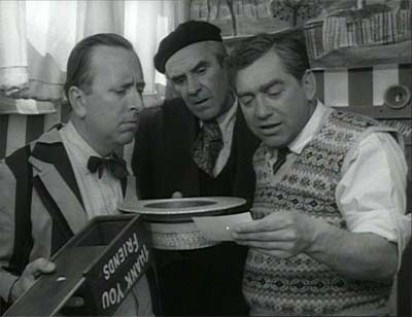 I say bizarrely because, if Hancock wanted to widen his appeal (especially in the States) it was never going to happen with this incredibly low-key and 'quiet' film. Hancock famously rejected three scripts by Galton and SImpson, and then at a meeting in Oct 1961 with the two writers and with his agent Beryl Vertue he basically sacked all three of them. Galton and Simpson went on to write 'Steptoe and Son', whilst Hancock worked with Philip Oakes, about whom I have managed to find out nothing, on the script of what became The Punch and Judy Man. Hancock is the titular character, Wally Pinner, in a dead marriage with Delia (Sylvia Syms) in the seaside resort of Piltdown (actually Bognor Regis). Delis is keen to get on with the high society of Piltdown, who are mainly snobs of the first order, and sees the arrival of Lady Jane (Barbara Murray) as guest of honour at the 60th anniversary celebrations as the ideal opportunity to advance her social standing. Meanwhile Pinner prefers to while away the time with his fellow wastrels, such as John Le Mesurier, another seaside entertainer scraping away to make a living.

Supposedly undervalued at the time, the film now tends to be praised excessively, as a sort of 'lost' classic whose time has come. I wanted to show a famous sequence from the film, where Hancock eats a 'Piltdown glory' (a huge ice cream) with a young boy, but it's been taken down from youtube and I can't upload my own version, but for me despite being nearly 8 minutes long it barely raises a smile. 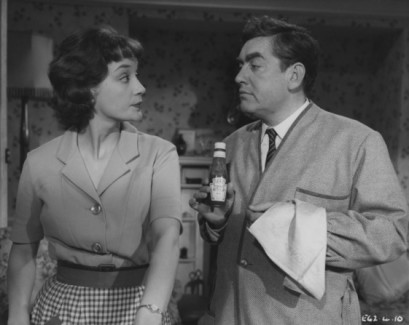 Much better however in retrospect are the scenes of domestic desperation between Sylvia Syms and Hancock, particularly at the breakfast table, but it does feel very much as though Hancock is trying too hard to reach beyond the 'comic',  to some deeper 'truth', much like Woody Allen was to do some 20 years or so later.

The problem is, of course, that Hancock is a comedian, and this film is supposed to be a comedy. You can call it gentle comedy, or subtle, or underplayed etc, but a comedy is supposed to make you laugh, at the end of the day. There is a happy ending of sorts (Wally and Delia seem reconciled) but in reality they would most likely end up divorcing each other in a year or two, and it is evident that the sad lives portrayed will go on indefinitely. 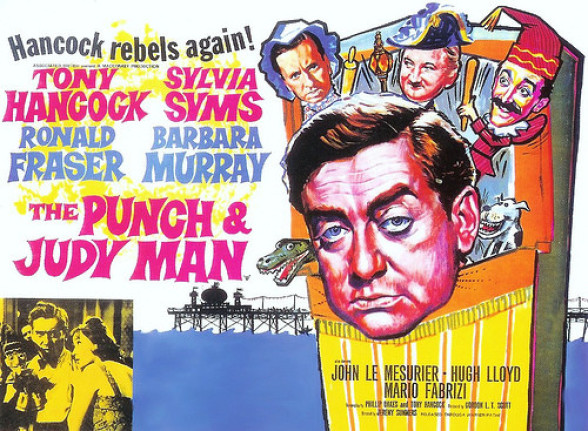 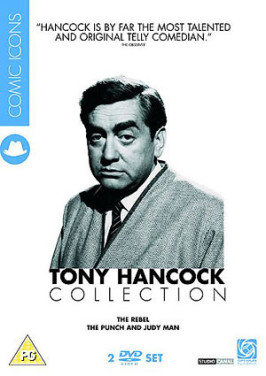 Hancock seems to have given up on films after this, and as Galton and Simpson had moved on to 'Steptoe and Son' they understandably rejected Hancock's requests to come back and write for him.  He appeared in cameo roles in two more films, Those Magnificent men in their flying machines and The Wrong Box but made little impression in either. Perhaps Williams was right after all...

Hancock's two films are available in a set for just over £6 on sites such as play.com.