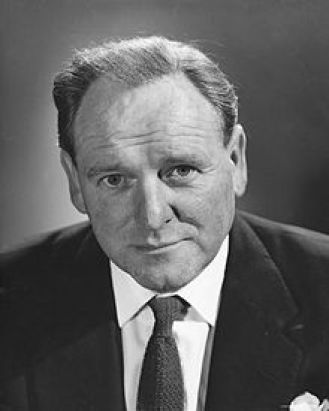 Bernard Lee (1908 - 1981) is one of the most ubiquitous of British actors, appearing in over a hundred films of all types and genres, although of course (and from my perspective, unfortunately) best known as 'M' in the Bond films, starting in the first film of what would now be called the Bond 'franchise, Dr No, in 1962.  Although we think of him as a 50s/60s actor, his first appearance was in 1934, when he was already in his mid-20s, indeed had he started earlier he would have even been in the silents...

He first came to real prominence in the late 40s and early 50s, appearing in The Blue Lamp for example, when he was already in his 40s, which is why we so often think of him as an avuncular figure - weary detective, solid authority figure, and so on. This page is just a quick glimpse at some of the less-well-known but fascinating films that Lee appeared in in the late 50s and early 60s; one such would certainly be The Ship that Died of Shame, but I've written about that film in the 'Films of the 50s' section on the website already. 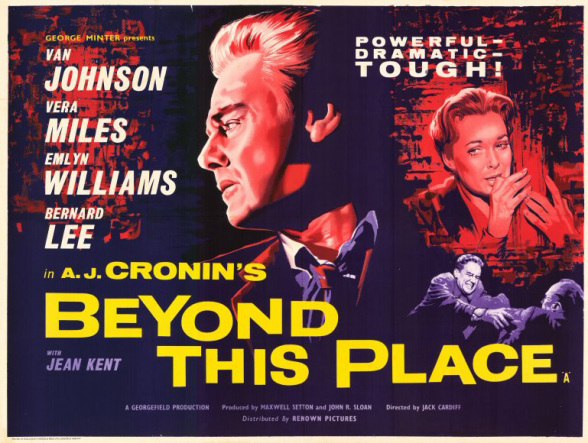 One such role, albeit brief, was in the 1959 film Beyond this place; Lee plays Patrick Mathry, and as the film opens in 'Wartime Liverpool' we see him involved somehow with a young woman, before he heads home to his wife and son, Paul, who seems rather too old to be bathed by his mother, but that's by the by.  The woman is then found dead, and the circumstantial evidence points to Mathry, and as the police call for him to "assist them in their enquiies" we don't see the character until the end of the film.

His son Paul then reappears 20 or so years later, having been evacuated to Canada, and has come to find what happened to his father, whom he thinks is dead.  The problem with the film is that Van Johnson, playing Paul Mathry, is far too old for the part (he was only 8 years older than Lee) as Johnson was 42-43 when the film was made, yet the character he plays could only have been late 20s at most.  Otherwise Lee's appearance at the end of the film, having been released from prison after 20 years, is notable for the bitterness his character displays, contrary to the usual 'oh well, worse things happen at sea' approach: 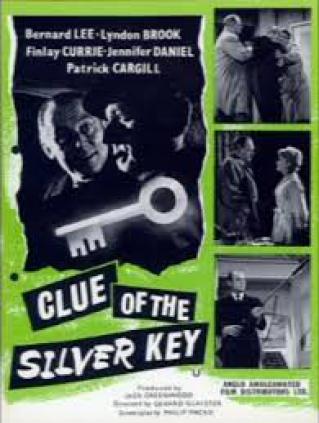 Between 1960 and 1964 Lee appeared in a total (by my count) of five Edgar Wallace Mysteries, more I think than any other actor.  He was always (apart from his second appearance, when for some reason his character's name was changed) as Superintendent Mason, with his sidekick Sgt Anson (Stanley Morgan).  The films were The Clue of the Twisted Candle (Sep 1960), Partners in Crime (Feb 1961), The Clue of the Silver Key (Aug 1961, right)), The Share Out (Feb 1962) and then, after a gap of more than two years, for one last time in Who was Maddox? (June 1964).

I even read somewhere that the Edgar Wallace Mysteries were so popular in France, with Lee becoming known there through his appearances in them, that he was known there as the 'English Maigret' - but where I read that I have no idea now, so it's just as well I'm not a research student as I can't evidence my sources.  Anyway, here is the ending of The Clue of the Twisted Candle, where in true detective style Supt Mason reveals who committed the dastardly crime: 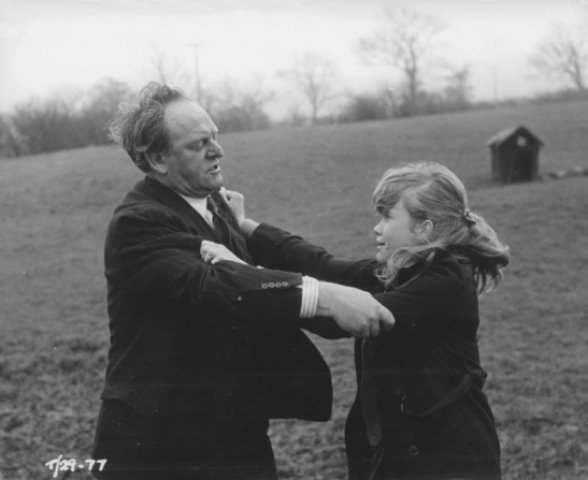 Although Lee's presence in this marvellous film is somewhat peripheral, which is only natural in a film which is all about children's perceptions of the world, it is still well worth a look at.  Lee plays widower Mr Bostock, the father of Kathy (Hayley Mills), Nan (Diane Holgate) and Charles (Alan Barnes) living on a remote farm where...surely you know all this?  Of course you do.  Shall I just go straight to the scene?  Everyone remembers this bit I think, especially the last line of the scene: "It isn't Jesus - it's just a fella:" 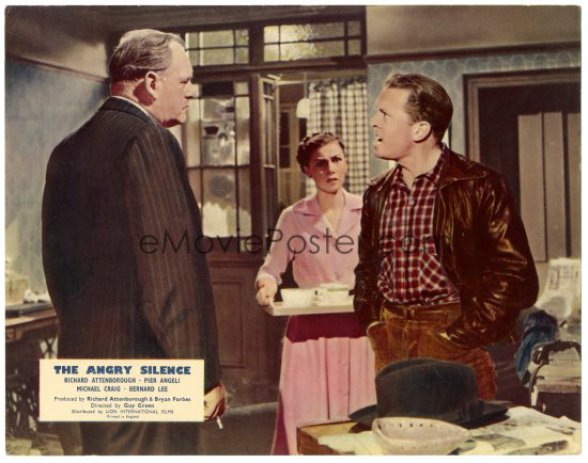 One of the best films of the 60s - or indeed any decade in my view - was Forbes' and Attenborough's  The Angry Silence, with Richard Attenborough playing Tom Curtis, a worker at a factory who gets ostracised for refusing to join an unofficial, 'wildcat' strike.  Whilst not the lead actor - a common theme for Lee, who was usually, but not always, in a support role - he has a memorable part as Bert Connolly, shop steward at the factory, who is manipulated by the sinister Travers (Alfred Burke), a Communist infiltrator orchestrating the discontent for his own ends.  There is a great scene where Connolly goes round to Curtis' house to ask him to join the strike, not realising that Curtis has already decided to do so, but Connolly's intervention makes him decide to do the opposite; but I have decided to show another clip, mainly because it also features another fine actor of the period, Geoffrey Keen, as the works manager Davis: 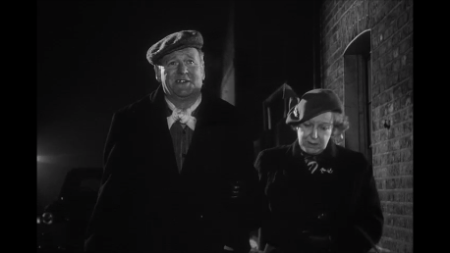 Another supporting role for Lee came in one of the last of the so-called 'Kitchen sink' films in 1963, a look at East End life in Bethnal Green, with Lee as the father of the main character,  Ricky Flint.  Matt Flint is married to Lil (Doris Hare, left) but his part is really a sideshow to the main story of Ricky's relationship with Catherine (Rita Tushingham, a favourite on this site), but it is still one of the most interesting elements of the narrative, as he loses his job as a docker and decides, unwisely, to take up a new job in the West End as a Houdini act: 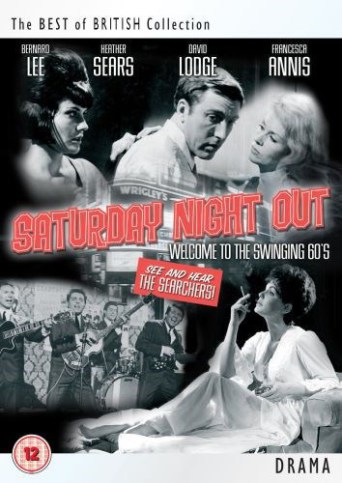 Saturday Night Out is a 1964 multi-strand drama with comedy overtones, focusing on a group of merchant seamen and passengers who arrive at the Pool of London on board ship and disembark for a...well, guess what? The main story looks at Colin Campbell's burgeoning romance with a very young Francesca Annis, and there are sub-plots involving David Lodge, Heather Sears and others; but of course our focus is on Mr Lee, who plays George Hudson, who is on his own but gets picked up in a bar by a young, vivacious French woman, Wanda (played by Erika Romberg, actually an Austrian) who allegedly mistakes him for 'Jacques', an old lover of hers.  As a middle aged, not particularly attractive man he is swept up in this unlikely romance, but makes the most of it, before we all find out what perhaps we had suspected all along, that he is being set up.  However, he has the last laugh, as this scene shows:

Ring of Spies is a fairly accurate account of the Portland spy ring, which came to national prominence in 1961 when Harry Houghton, Ethel Gee and Gordon Lonsdale were all arrested and charged with espionage and treason offences.  Houghton and Gee (first name changed to Elizabeth in the film) worked at the Portland Royal Navy base in Dorset, an underwater weapons establishment.  Houghton and Gee had been passing secret and sensitive documents to Lonsdale, on the understanding, or at least what they wanted to understand, that he was a Canadian businessman.  In fact he was a Soviet agent, who was passing the files and documents to a seemingly innocuous surburban couple, the Krogers, in Ruislip.  In this scene Houghton, played by Lee, is about to steal his first classified document, but Elizabeth (Margaret Tyzack), who wanted nothing to do with the plan, changes her mind at the last minute to help him: 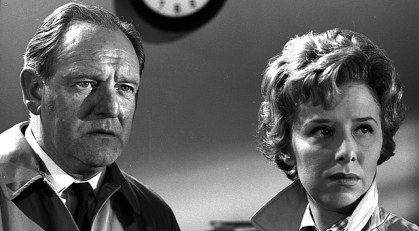 Lee is excellent in one of his rare lead roles as the heavy-drinking but persuasive Houghton, although one has to question how someone like him - he is seen at the start of the film being forced out of the British embassy in Warsaw due to his philandering and drunken behaviour, when even his employer says that he's "a bad security risk" - gets a job at a secret establishment where integrity would presumably be one of the key requirements for any prospective employee;  indeed it is Houghton's heavy drinking and conspicuous consumption which draws attention to him in the first place.

Houghton and Gee were sentenced to 15 years' imprisonment, but were released in 1970, having served 9 years, when they were married.  Lonsdale, whose 'real' name was Konan Molody (yeah, right) got 25 years but was out after only 3 years, exchanged for a British spy and sent back to the Soviet Union.

These were the golden years, before he settled for just being known as M; there are many other films worth looking at - Nowhere to Go, The Man Upstairs, Cone of Silence, The Secret Partner - but tomorrow is another day so another time for those.

The still at the top shows Lee in Nowhere to Go.