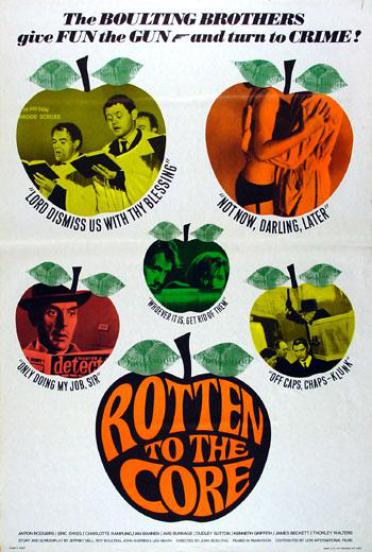 Rotten to the Core is a rarely-spoken of mid-60s comedy which deserves to be much better-known.  Made by the Boulting Brothers, with Roy producing and John directing, it stars Anton Rodgers, Charlotte Rampling, Eric Sykes, Ian Bannen, Avis Bunnage, Dudley Sutton and Kenneth Griffith in that perenially popular plotline, the comedy heist.  As the film opens, we find three ne'er-do-wells, Lenny (Griffith), Jelly (Sutton) and Scapa (James Beckett), about to be released from prison after serving 18 months.  Cut to pampered Sara (Rampling) arguing with her father Sir Henry Capell (Peter Vaughan) as they helpfully fill in the background (he has made his money as a Northern businessman, which he has lavished on her expensive schooling, with little result) as he tries unsuccessfully to persuade her to come home with him and warns her off her boyfriend Berkeley Greene aka 'The Duke' (Rodgers) although strangely he is in the other room at the time.  Cut back to the prison, as the three musketeers are being given their pep talk by the governor, and it is revealed that they were in the Duke's gang; whilst they got 18 months he managed to end up sunning himself somewhere, but they are hoping to get hold of the money from their last job once they all get out.  To their surprise though, they are met on leaving prison, not by the Duke but by Sara, who takes them to a nearby cemetery to see Berkeley-Greene's grave, tearfully telling them that all the money was spent on caring for the Duke during his fatal illness.  The Duke has however left them instructions for a good job, or so they think: 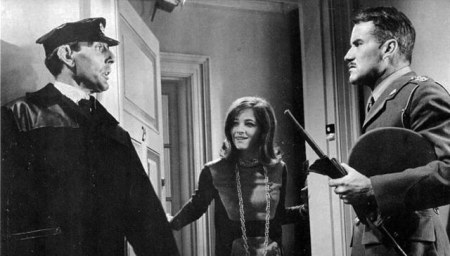 Sir Henry hires an obviously incompetent private investigator called Hunt (another classic performance from Eric Sykes) to spy on Sara and see what she's up to, so Hunt adopts a variety of disguises (all of which a child could see through) as he keeps an eye on Sara as she entertains her witless 'boyfriend' Lieutenant Vine (Ian Bannen), with whom Hunt almost immediately has an altercation (see above).  Vine is simply being played for a fool, as Sara of course is in league with the not-dead-at-all Duke, and she soon heads off to meet up with him in Longhampton, where he is running the Hope Springs Nature Clinic as a front.  Jelly, Lenny and Scapa also find out where the Duke is, and head off to Longhampton to confront him.  It turns out that the Duke is running the health spa as a cover for 'the big job' and reluctantly lets the boys join him, despite the misgivings of his right hand man, Anxious O'Toole (played by Victor Maddern, in a rather obvious copy of Bernard Cribbins' Nervous O'Toole from The Wrong Arm of the Law).  Whilst the Duke is taking Harold Wilson's advice to join in the scientific revolution to heart, it's not clear that the boys are quite ready to come on board: 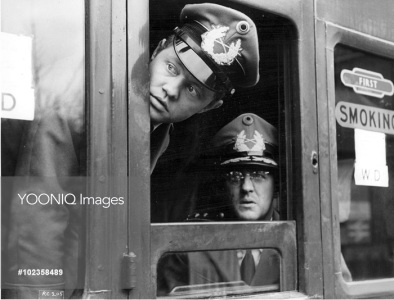 The Duke's plan is to rob a train carrying army wages (all the information of course coming from Vine via Sara, which is why she is playing him along all the time) and the Duke has gathered around him a top team of villains with names straight out of the 1950s manual of comedy crime names -  Nick the Bible, Chopper Parsons, Dirty Bertie - but there's a last minute hitch when Vine tells Sara that a top German Field Marshal, called rather hamfistedly Von Schneer, is going to inspect the guard of honour.  The Duke is not going to give up so easily though, so goes to plan B, to disguise himself and his crew as the German officers and steal the money from under the British army's collective nose.  Unfortunately, they have not yet got away before the real German Field Marshal turns up.... 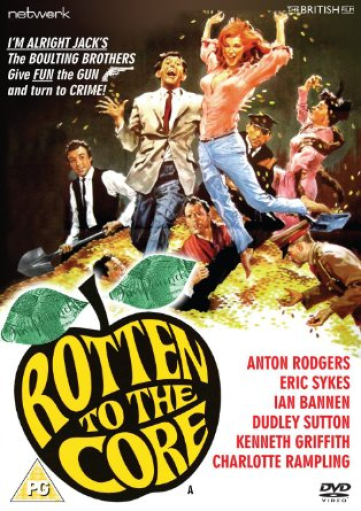 That may feel like the end of the film, but in fact there's another 15-20 minutes left, as the Duke makes one more attempt to get his hands on the money, and although there are a couple of good scenes where Vine is subject to further disgrace, and one involving the unexpected use of a tank, it's difficult to shake off the feeling that the film was padded out to fill up the running time.  One also feels that more could have been made of Eric Sykes' character, although Thorley Walters is amusing as a Chief Constable with a permanent sinus problem, and Basil Dignam has an impact as a senior army officer who understandably takes a dim view of Vine striking a senior NATO officer and 'exceeding the speed limit whilst in charge of one of Her Majesty's tanks.'  Anton Rodgers is fine as the Duke, but to be fair he doesn't get much chance to play comedy (unlike, say, Peter Sellers in The Wrong Arm of the Law or Two Way Stretch), and Charlotte Rampling has never been to my taste, and it's hard to deny that the film doesn't quite live up to some its illustrious predecessors, including previous Boulting Brothers' comedies (you can read about some of them on my page on their satires on this website).  Nonetheless it's still pretty good entertainment, and any film with Kenneth Griffith, Dudley Sutton, Eric Sykes, Ian Bannen and Thorley Walters has got to be worth watching.  Rarely shown on TV, it's available now from Network on Air for £7, but keep an eye out for Network's sales, when it will go for around £4; but just a word of warning, the theme song at the start and end is quite appalling, and one can understand why the singer's name is not listed.