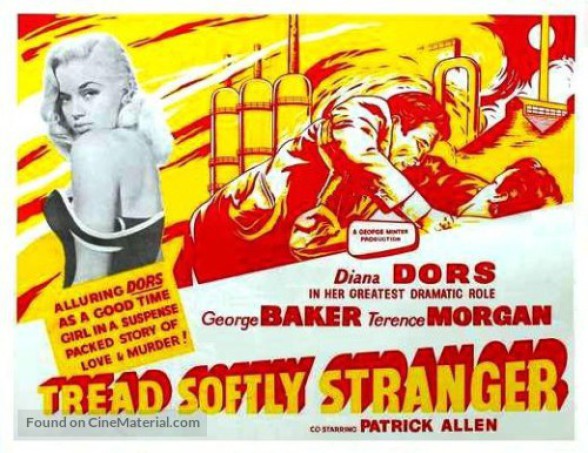 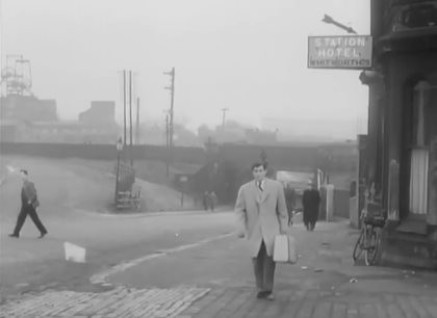 Tread Softly Stranger stars Diana Dors, George Baker and Terence Morgan in a crime thriller set, of all places, in Rawmarsh, just north of Rotherham (named Rawborough in the film).   Baker plays Johnny Mansell, who begins the film wining and dining a glamourous young woman, only to find that he needs to leave town quickly as he owes money to some dodgy-sounding types.  Without further ado he heads home to lay low for a while.  The reelstreets website has some good information, as usual, on the locations for the film, seen to good effect in this short clip showing Johnny arriving back in Rawborough: 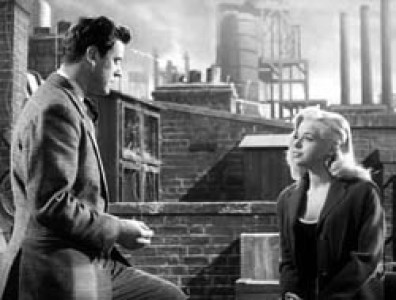 Er, probably not Rotherham in the background

Home turns out to be a bleak industrial town, where he stays with his brother Dave (Morgan) and meets Calico (presumably where St Etienne got the name from for their album track), played of course by Diana Dors. Calico is meant to be Dave's girlfriend, but it is obvious to all (apart from Dave) that she has her sights set on Johnny from the word go, as can be seen in this none-too-subtle clip, uploaded by felixxxx999: 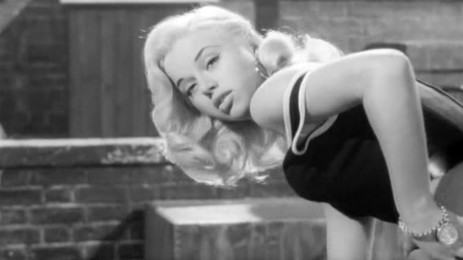 The film is marketed and promoted around Dors - she features prominently in all the advertising posters and trailers etc; indeed, it plays up blatantly to her sex appeal, out-Monroeing Monroe.  What I love however, probably because it is so quintessentially British, is that this sex goddess is placed in the most mundane of settings.  This clip from youtube, uploaded by capripants, showcases a number of Dors' scenes from the film, edited together, starting with the famous shots of Dors bending over, doing her exercises (when she should really have a Hilda Ogden headscarf on and a fag hanging out of her mouth): 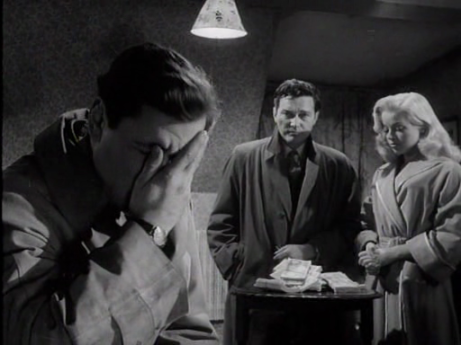 'Why the hell didn't I read the script first?' - Baker cracks up

In classic noir style, Dave is being led astray by Calico, and it turns out that he has been embezzling funds from the firm where he works, so he decides to stage a robbery to cover up his tracks, as the company are about to conduct an audit.  Whilst Johnny is away at the races for a day (ironically winning enough to cover Dave's thefts) Calico eggs him on, and provides him with a gun for the job; by the time Johnny arrives back Dave has gone to do the robbery on his own, so Johhny heads off after him: 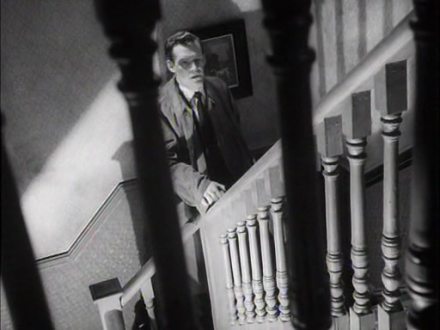 You want noir shadows, we got 'em

The brothers have more than the police to worry about though, as Ryan's son, Paddy (played by Patrick Allen, a man with the most protruding chin I think I'd seen before Matt Smith came on the scene) decides to investigate his father's death on his own, and Dave is so jumpy and nervy that he might as well hang a sign round his neck saying 'It was me, I did it'. 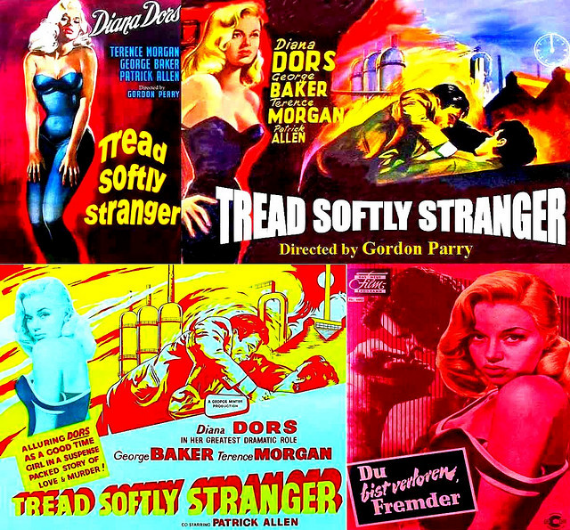 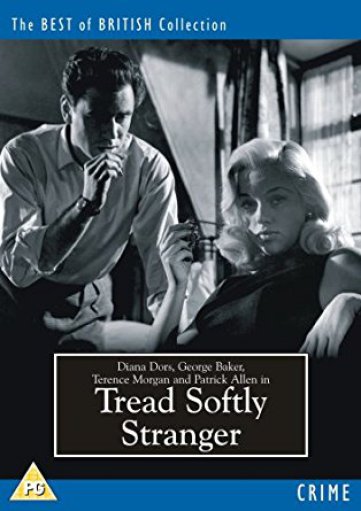 An often forgotten, and little-discussed noir thriller, one of the few articles I've seen on Tread Softly Stranger is in Offbeat, a book I mention on the books page on this site, where unusually they (Sarah Morgan, a TV Features and Imaging Editor, in this case) don't go much on it.  Morgan in fact starts off her piece:  "Actually, it's a rather silly offering with two prominent features - both of them belonging to Diana Dors".  I take her point about some of the dialogue, and the variable accents on display, but I really like Tread..., especially the contrast between Johnny and Dave as the two brothers.

You can see the whole film on youtube, which is just as well as the DVD now seems very pricey (£14 on play.com, which is certainly not what I paid for my copy a few years ago); it is released by Odeon Entertainment as part of their Best of British collection.  OK, maybe we might be watching it for Dors (an underrated actress, as Yield to the Night demonstrates, but she struggles with some of the stilted dialogue she's given here) but the film is at its best when the script concentrates on the tension betwen the two brothers as Patrick Allen tracks them down remorselessly.  Very enjoyable film in my opinion.