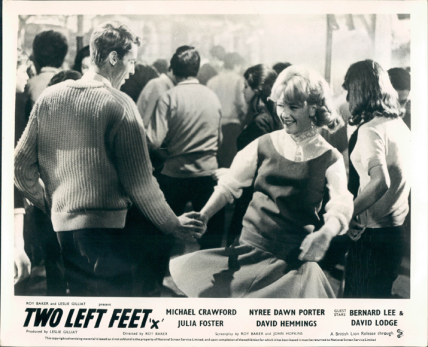 Two Left Feet, released in March 1963, is, when all is said and done, a fairly inconsequential film, and I would be lying if I tried to make out it was some sort of undiscovered classic.  However, it does have plenty of incidental pleasures, particularly for those interested in the cinema of the time (and if you're reading this, it's a fair bet that that includes you, dear reader) and especially if you're a huge fan of Julia Foster, as I undoubtedly am.

We have to endure a terrible title song at the start, which refers to the lack of dancing skills of the main character Alan Crabbe (Michael Crawford) and in the credit sequence at the start we see him managing to step on the heels of a young woman on the tube (see below, I thought this was Jodie Foster's mum, such a resemblance does she have to Ms Foster) 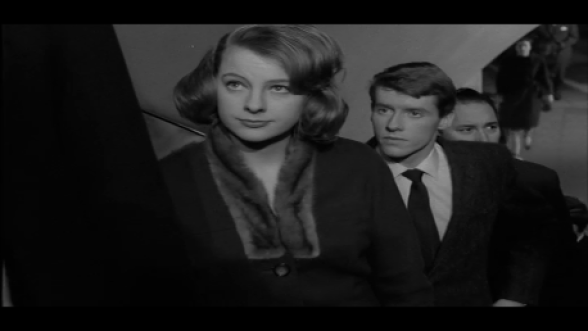 This was Crawford's- who has a much larger presence in 60s films than he is usually given credit for - first starring role, who although supposedly a naive and gauche youth who lags behind his more assured, cocky (and older) co-workers at a removals company, is in fact a more confident and indeed occasionaly insolent teenager than his character in The Knack two years.

Eileen (Nyree Dawn Porter), a new waitress at Joe's cafe, about 10 seconds walk from his place of work (handy, that), attracts the attention of Alan's fellow workers (David Lodge, Neil McCarthy, Howard Pays and boss Cyril Chamberlain), but she gives them all short shrift, coming across as the slightly more lively sister of Viz's 'Bored 16 year old Saturday shoe shop assistant', until something about Alan's more reticent attitude sparks something in her.  He 'gives her some old chat', as Squeeze would say, and then they have a date at the Floride Club, a trad jazz dive where he runs into Brian (a very young David Hemmings), Ronnie (Michael Craze), and Brian's girlfriend Mavis (Dilys Watling).  Now this is where the film has an interesting sub text, albeit one where I am not sure if I am reading too much into the narrative, or indeed misreading it completely - is there a gay link between Brian and Ronnie?  This seems to underlie much of the ensuing tension between the group, and maybe I am looking at the film from a modern perpsective, but without having read the book (by David Stuart Leslie, called 'In My Solitude') I can't comment further, so I'll let others judge from this long sequence:

Although the couple go out again, it's clear that Eileen is not going to be satisifed with Alan, (although I don't know what she sees in Ronnie) whilst Alan runs into Beth (Julia Foster, as if you didn't know) again, as he turns up at her home with David Lodge as their removal team; it turns out, as Alan sees from a newspaper headline, that Beth's father has just committed suicide due to a serious charge being made against him (but we don't find out what that charge is, and in any case the story line is not developed at all, so I can only assume that it features more prominently in the source novel, but got dropped during the script writing stage).

An outing at the Riverside Jazz club (I wonder where it was filmed?  For once, www.reelstreets.com is silent on the subject) is in the offing, so Alan goes with Beth, but as Eileen and Ronnie are going as well, things are likely to be rather tricky, and so it proves to be, especially as Ronnie has had too much to drink on the train journey down:

Brian and Mavis get married, so again the scene is set for another awkward social occasion at the reception, as both couples - Alan and Beth, Ronnie and Eileen - are present again, but this time the event is presided over by the overbearing and tedious Uncle Reg (Michael Ripper) which only makes it worse.  I do have to wonder though, was it really usual pracitce to play games at weddings at the time?  I thought for one horrible moment they were going to play 'Pin the tail on the donkey' and 'Statues', although the reality is not much better:

The ending of the film - I mean the last 20 minutes or so - hint at one of the problems of the film, which is that it doesn't seem to know what it wants to be.  Robert Muprhy calls it a 'sharp comedy' but it's more of a straight drama, but still nothing ever gets too serious, and even when Ronnie gets a gang of hoodlums together to sort Alan out at Joe's cafe, there isn't much tension to the scene and it never looks like getting serious; actually, the best bit about this scene is having fun trying to spot Billy Murray and -yes, indeed - Mike Leigh (OK, I didn't spot the latter, until a bit of background research on imdb revealed the truth). 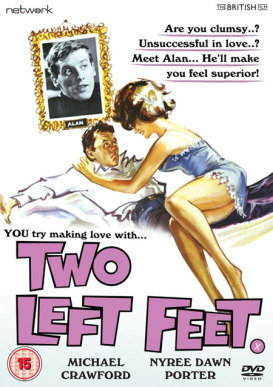 Two Left Feet struggled to get a release at the time; most of its main players were young and unknown, and it became one of a group of films, which included The Leather Boys, Ladies Who Do and The Caretaker, which suffered from a delayed release due to a complicated dispute between Rank, ABC and small independents, a fascinating subject but too complex to go into here.  By the time it was released, on a double bill (don't know which film it went out with) about 2 years later, it unsurprisingly did poor box office.

As befits an 'unsung' film, Two Left Feet used to be very hard to get to see, but Network on Air released it a couple of years ago, when I got my copy, and I now see that they're having another sale again (Sunday 29 Oct 2017) with this and other such films on sale now for only £4.19, so a good time to get hold of it.