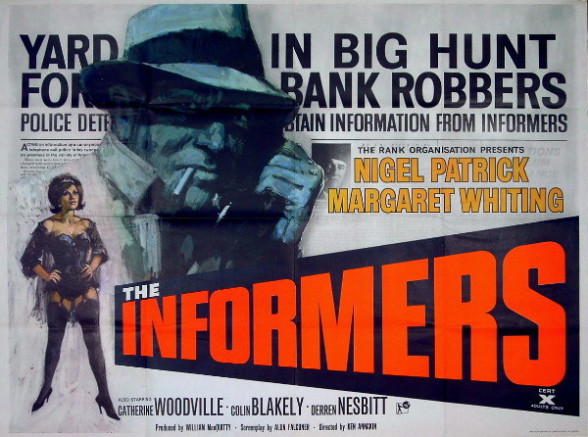 The Informers is a film I've wanted to see ever since I read about it in Robert Murphy's book on 'British Sixties Cinema', where he writes positively about the film, stating that it "represents something of a high point in the development of British crime films" and ends, presciently, by stating that "it is depressingly symptomatic of attitudes to British cinema that the film has subsequently vanished into critical oblivion."  That was written over 20 years ago, in the early 90s, and the film itself was released on DVD about 18 months ago. 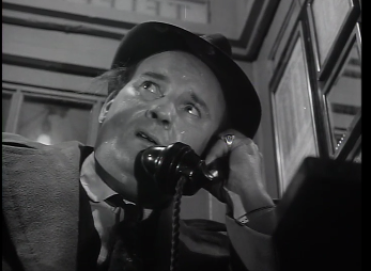 Based on a book by Douglas Warner called 'Death of a Snout' (which, as Murphy points out, is a much better title than the bland 'The Informers') it looks at the issue of informants, or snouts (now called CHIS - Covert Human Intelligence Sources - gawd help us).  Supt Bestwick (Harry Andrews) makes it clear to his team that he wants to use bugging equipment, not informants, in future, a decision which Chief Insp Johnnoe (Nigel Patrick, playing a role almost identical to the role he played in Sapphire a few years earlier) clearly disagrees with.  One of his snouts is Jim Ruskin, whose brother Charlie (Colin Blakely) implores Johnnoe (what sort of name is that?) not to keep his brother involved in police work.  Ruskin has some information for Johnnoe as it happens, relating to a series of bank robberies that have been baffling Scotland Yard; in this scene, we see who's involved: 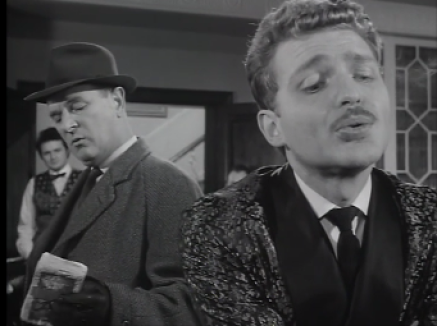 Hoyle attempts to bribe Johnnoe, whilst Peter Bowles lurks in the background

Hoyle (Derren Nesbitt, in a horrible moustache, whose lips make him look at one point as though he's a Thunderbirds puppet) and Leon Sale (Frank Finlay) are clearly playing for more serious stakes than the likes of 'Shorty' Sparks (Roy Kinnear), and Jim Ruskin is killed by Hoyle, and the murder made to look as though 'Shorty'  is the guilty party.  Understandably Ruskin blames his brother's death on Johnnoe, and decides to get his old underworld pals to find out who was behind it all.

As the different strands start to make the plot become a little complicated, another new element is introduced; Sale decides to fix Johnnoe once and for all, and implicate him in a corruption scandal by fitting him up.  Hoyle attempts to bribe Johnnoe without success, so, having first arranged to plant the stolen money in Johnnoe's loft, he installs a secret camera in his girlfriend Maisie's (Margaret Whiting, given second billing with Nigel Patrick in most of the posters, as seen above) flat and persuades her to lure Johnnoe into a trap, as in this scene: 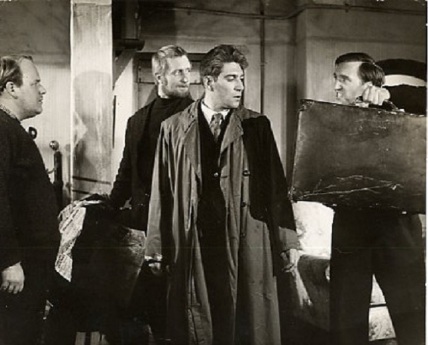 The different strands start to come together now, as Ruskin's mob start taking the law into their own hands, whilst Johnnoe, suspended from his job for suspected corruption, continues to carry out his own investigations whilst on bail, and the net closes in on Hoyle, Sale and their gang.  The film does take on a little bit of a boy's adventure story at this point, and the denouement unfortunately does become a little bit of a farce, reminding me a bit of Hue and Cry.  There's even a scene where Johnnoe manages to get out of a locked room using a technique which I first learnt about when Fatty showed Pip, Larry, Daisy and Bets the trick in one of the' Five Find-Outers' books by Enid Blyton. 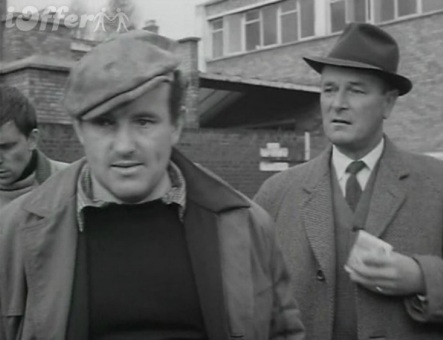 What is now of interest is looking at the whole issue of informants and police corruption from our 21st century perspective.  Whilst we, the audience, are clearly on Johnnoe's side, it is now also painfully obvious that Johnnoe has brought a lot of his problems on himself, by holding meetings which he hasn't recorded in his diary, going alone so his account can't be corroborated, and so on.  Whilst Johnnoe is innocent, I am reminded of Sam Tyler's words in 'Life on Mars' - "this is when it was all going on" - and whilst Johnnie is not on the take, the sad fact is that there were plenty of officers at the time who were. 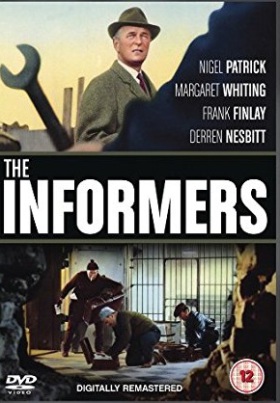 As always with these films, there are the extra pleasures of spotting familar faces, and The Informers is full of them, including Peter Bowles as one of Hoyle's gang, in a waistcoat so garish that I was glad the film was in black and white, Garfield Morgan as one of the police officers, before he got promotion to Chief Inspector as Frank Haskins in 'The Sweeney', and Brian Wilde, who became famous as Mr Barraclough in 'Porridge'' a decade later, this time on the wrong side of the law, although he still looks like you could blow him over.

You can buy the DVD for less than £7, although it's also out in a box set called 'Great British Crime' with three other films (Sapphire, Turn the Key Softly, and Checkpoint) for about £18, which is better value if you haven't already got those.  A must-see for those who like good old Brit crime films where everything turns out all right in the end.