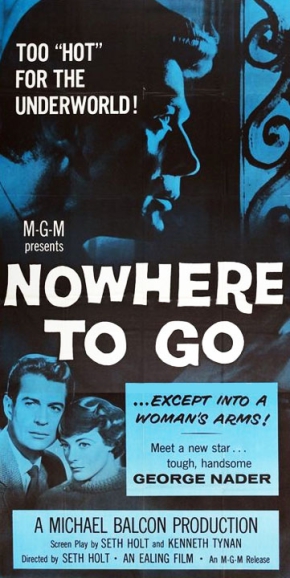 Nowhere to Go is the Ealing film that doesn't feel like an Ealing film; the first Ealing film to use a jazz score, it was directed by Seth Holt, who had edited a number of previous Ealing productions, and starred George Nader, an American who had been imported into the film, like so many other US and Canadian actors at the time, to boost the film's earning potential abroad.  Whilst this was never much of a concern for Michael Balcon, Ealing's avuncular head, these were not the happiest times for the studio and this in fact was one of the last productions to feature the famous Ealing logo; even then it had to be partly financed by MGM UK, which is why the audience is treated to the unusual sight of the famous roaring lion at the start of a British feature.

Holt himself, who had been at the studio for 15 years, wanted the film to be 'the least Ealing film ever made', a quote which echoes Robert Hamer's famous line re Kind Hearts and Coronets, that he (Hamer) wanted KHAC to be "not noticeably similar to any previously made in the English language".  The comparison is not that fanciful; Holt was Hamer's brother-in-law, and Hamer was only 12 years older than Holt, indeed it is not that unlikely that if Hamer's career had turned out differently then Nowhere to Go would be the sort of film he might have made in the late 50s.

Holt also wrote the script wtih Kenneth Tynan, then the script editor at Ealing Studios but who had made his name as a theatre critic championing the 'Angry Young Men', although he is best known now for allegedly being the first person to say 'fuck' on British TV in 1965.

Anyway, back to the film.  It starts with a breakout from prison, whcih strangely starts wtih a break in to prison, over the aforementioned jazz score: 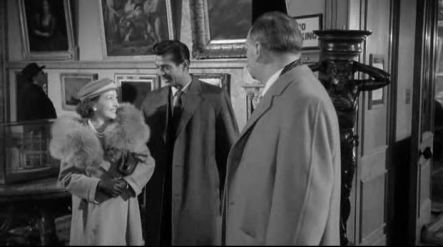 We then see, in flashback, the crime that led Gregory (Nader) to end up incarcarated at Her Majesty's Pleasure, as we go back a few years and see Gregory targeting a wealthy Canadian widow Harriet P Jefferson, at the unlikely surroundings of an ice hockey game.  Gregory himself is Canadian (although Nader was an American from California) and he soon uses his charm to disarm her and make her susceptible to his suggestions.  He has his eye on her late husband's collection of coins that she is in London to sell, and 'introduces' her to Ted Henderson, who of course is Victor Sloane (Bernard Lee) whom we have already seen assisting Gregory to break out of prison.

The film follows the plan to sell the coins to Dodds and Dodds, a London firm specialilsing in numismatics (coin collecting, just looked it up!) and then we see the robbery in all its brilliant simplicity unfold, realising that Gregory knows, and factors in the fact, that he will be caught, believing that he will be given a short sentence at the end of which he can pick up the money and disappear off into the sunset.  Here's the whole sequence, you can spot Geoffrey Keen in a minor part as the arresting officer: 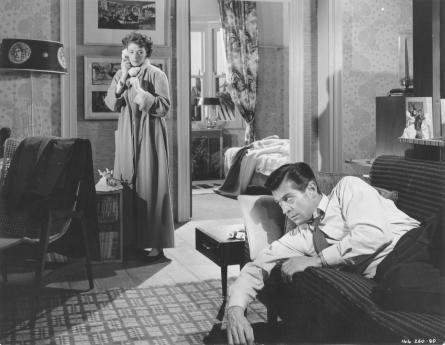 There is a complicating factor in that the flat is rented out in the name of Michael Bishop (who has had to go abroad, to Tangiers, at short notice due to some 'difficulties') and his fiancee, Bridget Howard (Maggie Smith, in her first film role) turns up to see Bishop.  Gregory gives her a false identity, and is now an American, but all passes off smoothly enough although the ground has been laid for Miss Howard's reappearance later in the film.

Gregory's problem remains getting the money out of the safe deposit vault, and getting away, but he needs Sloane's help, and it's at this point that the film takes another twist.  Just when he is on the verge of getting the money he sees Geoffrey Keen again, and decides to leave it for another day.  He has a surprise waiting for him back at the flat though; Sloane has decided that he's not satisfied with his cut, and demands the whole lot, refusing to believe Gregory when he says the money is still in the vault.  There then follows a cat and mouse game between the two, as they seek to get one over on the other, and in a manner mildly reminiscent of Dial M for Murder it becomes difficult to work out who has the key to the vault. Gregory shows a touching faith however in his belief that if he rings a number, and there is no answer, then nobody is in and nobody lives there, so he is completely safe to go round uninterrupted.  He tries this twice, and both times come unstuck, leaving him moving on but never finding any peace.

As he slips deeper and deeper into the mire he finds he has fewer and fewer friends willing to get him out of it, but inevitably he runs into Bridget again, at a friend's club; but he is beginning to realise that he can't trust anyone as the meaning of the film's title becomes clear: 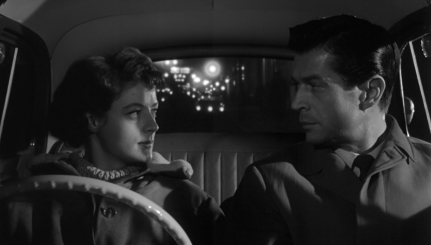 After being given the brush-off by an underworld Mr Big, played by Harry H Corbett ("You're too warm for me mate, much too warm") Gregory realises there is, as we expected, only one person he can trust - Bridget. (The fact that he hardly knows her is of course neither here nor there - this is a film after all, and such things can happen in films).  What is a bit unusual is that Bridget is no flittery girl, or hardened moll, but a clear-sighted, unsentimental young woman who has decided to help Gregory, not because she believes him to be innocent - he has never claimed that - but partly because she likes him and figures she has little to lose, but I think mainly for the excitement and adventure it offers.  The last section follows their flight from London to her parents' house way up in the Brecons, although it is obvious that Gregory is kidding himself if he thinks there is any way out. 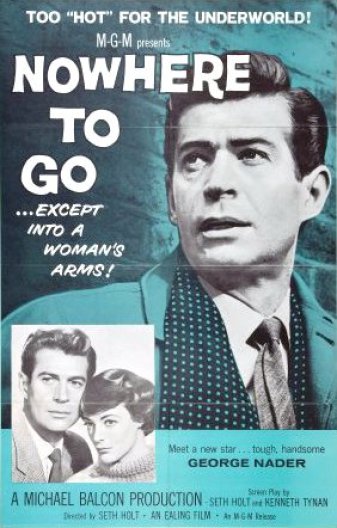 The film is out on DVD now, in a fine print which shows off the noirish photogopraphy (see for example the still at the top of the page) but there is a very disappointing short feature entitled 'Revisiting Nowhere to Go' which has Charles Barr (who wrote the seminal book Ealing Studios, see my book page on this site) in unusually hesitant mode, with precious little information about the film and its production, or even much about the director Seth Holt and his other work.  What is most frustrating about this 'Special Feature', apart from the bizarre way it just ends on Barr, without any credits etc, is that it refers at one point to 20 minutes of film being cut,and the DVD box refers to a 'previously unreleased 100 minute version of the film', without anyone at any point saying what was cut, or what the extra 10(?) minutes consists of.  This sort of thing drives me up the wall; if anyone is interested enough to firstly (a) buy the DVD and (b) be aware that there is some extra footage that was cut out on its first release, then at least have the decency to explain what was cut and maybe why.

That said, this is a very unEaling film, and very much more like a Hell is a City or an Offbeat in its unsentimental portrayal of a scheming criminal, although it was not yet the time to show that crime does in fact pay, and sometimes pays very well.  The celebrated jazz score is a matter of taste, although I personally found it rather intrusive at times, but then I'm not a jazz fan.  Whilst never a major film, and it would be hard to put up a case for it being an overlooked masterpiece, Nowhere to Go is another film which shows off the variety of British cinema at the time.  Oh, and Lionel Jeffries is in it for about 2 minutes so that's another bonus.  Available for under £10, MovieMail seems to be the cheapest at the moment at £8.