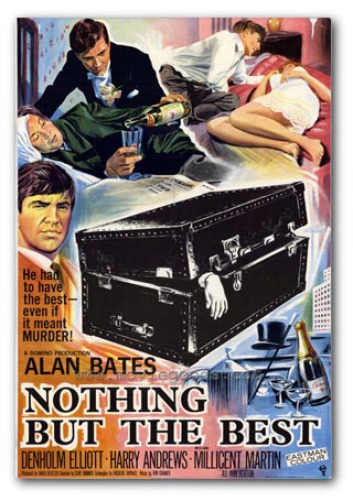 Nothing but the Best is a world away from the New Wave Northern dramas of only a couple of years previously, and seems to set out to emphasise this difference by having as its star Alan Bates, who had made such an impression as Vic in John Schlesinger's A Kind of Loving, one of the key New Wave films.  Bates now plays Jimmy Brewster, a man on the make who is, as he puts it, on the bottom rung of the ladder at Horton's and Co, Auctioneers and Estate Agents in the City.  In the opening sequence it is made clear to us that Brewster is a materialistic, go-ahead young man, only out for himself, in a character type only too familiar to us now from the yuppie stereotypes of the 80s (although it should be pointed out that Bates, by then in his late 20s, was already too old really to play the part).

He is courting Nadine (Lucinda Curtis), the receptionist at the firm, but he has already ruled out any idea that she is going to play any major part in his life:  "I can cope with this kind of chick with my eyes shut. She's strictly League Division Three but one has to keep in practice.  Sooner or later of course she'll have to go but meanwhile..."

The next day we see Brewster at work, in more ways than one, as he starts to climb the greasy pole:

Brewster then has a piece of luck which he immediately sees as a opportunity not to be missed; he meets Charles Prince (Denholm Elliott), a dissolute but fully paid up member of the upper class, who by chance used to work at Horton's until he was sacked for forging cheques.  As Charles is currently 'between digs' Jimmy offers to put him up (and to put up with him) in return for one thing: a chance to take on the trappings and style which he craves but has been denied to him by birth.

Robert Murphy puts this relationship, quite rightly in my view, at the heart of the film, stating:

Nothing but the Best was not a great commerical success but it now appears one of the seminal films of the decade, its central contrast between Alan Bates's enterprising, unscrupulous lower-middle class clerk on the way to the top and Denholm Elliot's (sic) fey, upper-class degenerate serving almost as a metaphor for what was happening in political life as the Tory Party's popularity crumbled under the impact of the Profumo Affair and their new leader, the fourteenth Earl of Home, proved less than a match for Labour's cocky, image-conscious Harold Wilson.

Charles, for his part, is only too glad of the chance to have his lifestyle - no work, plenty of time for drink, billiards, betting and doing bugger all for as long as possible - paid for, and so embarks on a crash course for Jimmy - "another ambitious yob", as he puts it - in 'living the lifestyle', as this clip demonstrates: 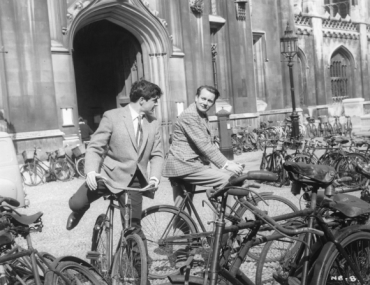 This element of the film is its high point, as Elliott effortlessly takes over the picture, playing the part to the hilt.  With Charles' advice and guidance ringing in his ears, Brewster sets his sights high, aiming not only to ingratiate himself in his firm, playing up to the head of Horton's (Harry Andrews) but also making a play for his daughter Ann (Millicent Martin) and manouevering her away from Lord Langham (James Villiers).  He also gets into the good books of 'players' such as Adrian Slater (Donald Pickering, uncredited for some strange reason) and Roberts (Ernest Clark).

Brewster's catchphrase - "S/He'll have to go, sooner or later" - is found to have a literal application as Charles, having won quite a tidy sum on the stock exchange (which Jimmy has been playing on his behalf, having cajoled Charles into letting him do his banking for him), lets it be known that he is planning to go and sun himself somewhere until the bad times come round again.  Jimmy realises he has to act quickly, and acting more on instinct than calculated planning, stranges Charles with (of course, how symbolic!) the old school tie which he was about to return to tis rightful owner.  In true detective fiction fashion, he hides the body in Charles' trunk which he moves into the cellar, helped by his feisty landlay Mrs Marsh (Pauline Delaney), who comes to suspect Jimmy but is content to say nothing as long as he devotes some attention to her from time to time.

Will he get away with it?  It seems not at one point, as in a twist of fate it tranpsires that Charles is the wayward son of Mr Horton and, as James ('Jimmy' has quietly been abandoned) is about to marry Ann, also James' brother-in-law; and the trunk literally comes back to haunt him: 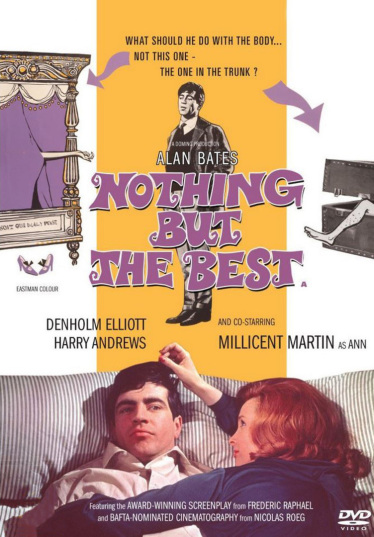 Brewster is not yet in the clear though, as the film has a couple more twists and turns to play out, but what they are I'll leave for you to find out.  The DVD is now available for about £6, in a fine restoration of the original print, colour cinematography by Nicolas Roeg.

The screenplay is by Frederic Raphael (I thought it was his first screenplay, but I've been advised that he had already collaborated with Leslie Bricusse on the Cambridge-themed Bachelor of Hearts starring Hardy Kruger and Sylvia Syms about five years earlier, which I've not seen) before he went on to script Darling and of course Far From the Madding Crowd, back in the news (April 2015) as there is a new remake out next month starring Carey Mulligan in the Julie Christie role of Bathsheba Everdene.

Clive Donner, the director, had earlier made Some People and The Caretaker, an adaptation of the Pinter play, and Nothing but the Best helped him to get the keys to Hollywood, but he was back a few years later to make one of my favourite later 60s films, Here we go round the Mulberry Bush, which I've written about on this site as well.

One of a number of films that bridged the gap between the New Wave films of the early 60s and the 'Affluent' films of the mid-60s, it remains most memorable not for Bates' performance (although he is fine) but for Denholm Elliott's all-too-brief screen time, along with a host of 'faces' where you tend to know the face but not the name (although, yes, that is Bernard Levin appearing uncredited at a party, presumably invited along with his TW3 chums Millicent Martin and Willie Rushton).  Thankfully, no 'bloody' David Frost though....