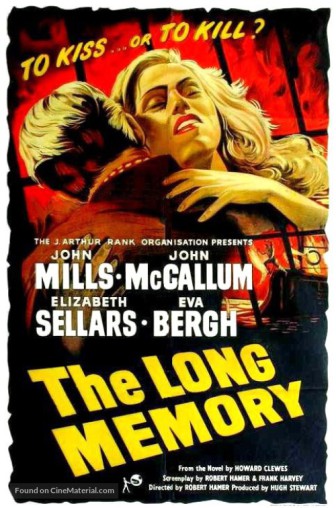 The bizarre tag line 'To Kiss or to Kill?' makes no sense

The Long Memory, Robert Hamer's post-Ealing brooding revenge thriller, has long been a favourite of mine, partly because it features, as part of its austere landscape, Northfleet and Gravesend, where I used to work in the late 90s.  It stars John Mills as Philip Davidson, wrongly convicted for manslaughter/murder and who serves 12 years in prison. As the film opens we see Davidson, just released from prison, leaving Waterloo station, followed by surely one of the most inept police officers ever, who follows him so closely that he almost trips him up.   Incidentally, this officer, DC Bletchley, is played by John Horsley, most famous for his role as Doc Morrissey in 'The Fall and Rise of Reginald Perrin' many years later.  I was sad to read of his death only a couple of months ago in January 2014 whilst researching this piece today.

Davidson heads for the bleak, windswept North Kent coast and to a abandoned and rundown barge, where his only (unwelcome) companion is an old poacher who insists on making Davidson a cup of tea (so you know it's a British film).  Finally left alone, he broods on the events that led him to his current situation.  Rather than describe the scene, it's easier to show it: 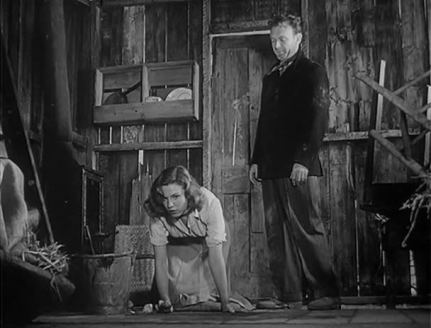 Davidson now plans his revenge against those who committed perjury at his trial, but one complication is that Fay Driver is now married to Supt Bob Lowther (John McCallum), who is investigating Davidson.  However he cannot seem to get away from people wanting to bother him; firstly a reporter, Craig (Geoffrey Keen) and then a refugee woman called Ilsa (Eva Bergh) from the local cafe, who decides he needs company and sticks to him, despite his protestations.  I'm not sure what nationality she is meant to be (Polish? Czech?) although Bergh herself is Norwegian.

The cafe shack is surely the most desperate ever seen in a British film, and reminds me inexorably of the one in Le Quai des Brumes, although there Jean Gabin meets up with Michele Morgan, whereas Mills has to make do with Vida Hope: 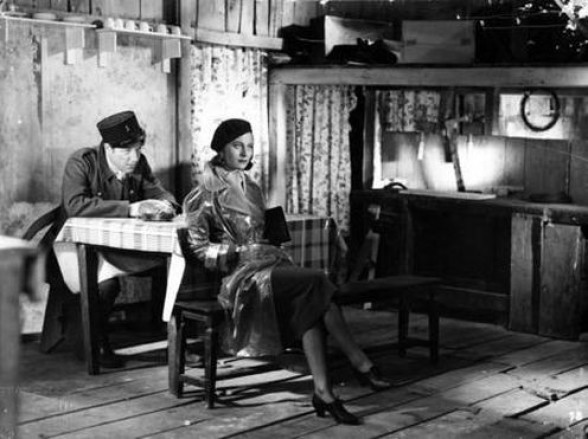 Philip Kemp, writing of Hamer's work after Ealing, says of the film that "What makes The Long Memory worth seeing is spirit of place: its exceptional use of landscape" and indeed It is these images that stay long in the mind; not only those of the area around Gravesend, but also of the docks by Tower Bridge:

For a similar reason I have stitched these two scenes together, both with Craig and Lowther as they follow Davidson's trail as he goes looking for Pewsey, mainly for the atmosphere, with the surrounding area feeling more like a Wild West outpost than a town just outside London (and look for Thora Hird as Pewsey's husband in an early role): 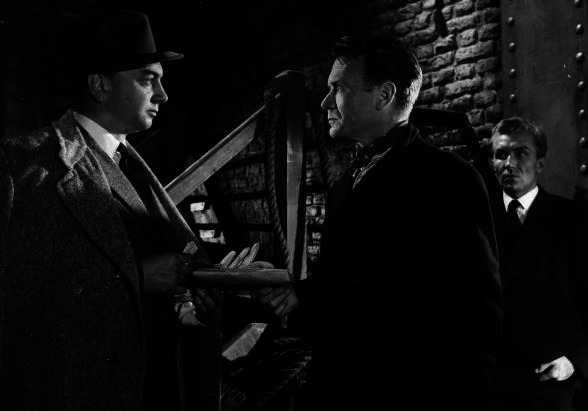 Having bullied Pewsey into confessing his perjury 12 years previously, in a bizarre scene which again lends itself more to the cliches of the Western than to a noir film, and pressurised Fay Driver into some melodramatic and slightly ridiculous actions in trying to escape her situation, Davidson ends up by chance confronting the man he is supposed to have killed, Boyd (John Chandos), who now runs a dodgy import/export business by Tower Bridge.  Again, it is the sense of place that prevails and predominates, with lots of scope for shadows to bolster the film's noir credentials. 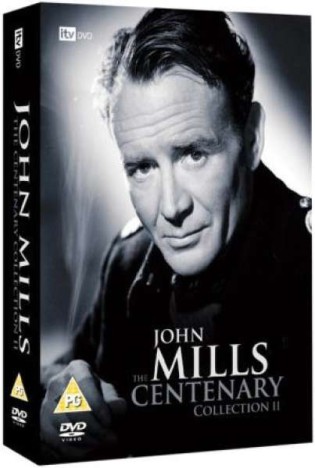 There isn't too much more to say about the film without giving more of the plot away, or revealing the ending, but this is definitely a film that is heavy on atmosphere rather than narrative.  As Kemp says in the same article:  "The plot of The Long Memory fades fast from the mind, but its texture stays vividly with you".  It seems to be fondly remembered by many, although the critics have never been overly keen.  Halliwell's gets it completely wrong as usual by stating that the film is "set largely on a barge" (well, about 5 minutes of its running time) and even The Radio Times guide, usually much more in touch wtih things, suggests that Mills is badly miscast; I can't see that myself, he plays obsessives very well I think, indeed he seems more than able to turn his hand to any sort of role.

I can't see if you can buy the film just on its own, but I have mine as part of the John Mills Centenary Collection, which retails at just over £17 and has 6 other films on it, including Tiger Bay and The Vicious Circle, so very good value.