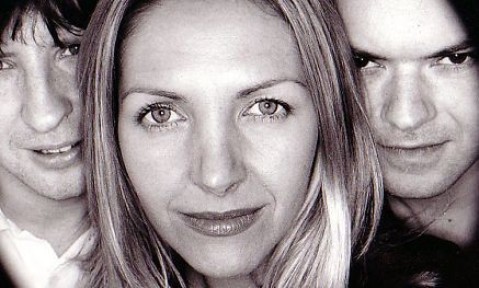 Saint Etienne have used a lot of samples from British films, mainly from the 60s and 70s, at the start, end and in between their songs, and although I don't want much from life, one of my few ambitions is to find out where they all come from.  I knew quite a few anyway, worked out some others, stumbled across others by chance and so forth.  Please help me to fill in the few gaps left if you know any of them, via the comments page or the guest book page. 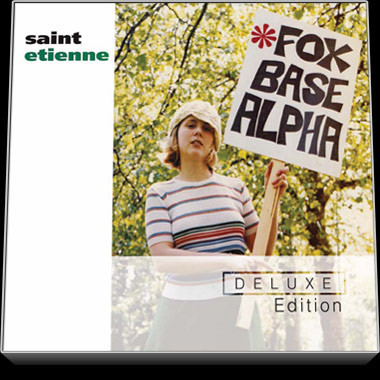 Saint Etienne's debut album, with a track listing of:

This is one I've just stumbled upon by chance - I was watching The Reckoning, a 1969 film starring Nicol Williamson (see the page under 'Unsung films' on this site) which I got hold of from stojo.com, and suddenly there was a shock of recognition...And at last I found out what it was that everyone was apparently waiting for!  Here's the clip:

Track 11 is simply a long sample from an American film, for once:  this is House of Games, starring Joe Mantegna.  This includes the exchange:

"You son of a bitch, you been steamrollering over me all night.  What you trying to tell me?  One card, you got a flush?  What?  I think you're bluffing pal, I think you're trying to buy it."

"I think you're bluffing."

"I should raise your ass, but I'm just gonna call"

Here's the clip from the film which contains the exchange, although in the sample the middle section has been omitted:

Apart from a few bits and pieces ('Countdown' etc) that's about it for the first album, but then they really got into their stride with their second album release in 1993, which is stuffed full of references and clips. 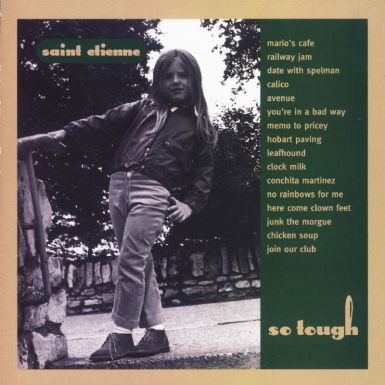 The LP begins with a short reading of "A cigarette, a cup of tea, a bun..." before launching into 'Mario's Cafe'.  A bit of internet research shows that this is a Dirk Bogarde poem called 'Steel Cathedrals' which ends:

The station clock with staggering hands and callous face,

and my train goes at ten.

It sounds as though Bogarde is reading the poem himself.

The start of track 2, 'Railway Jam', has the first real classic sample, a fairly easy one this, taken from Michael Powell's Peeping Tom, where Helen Stevens (played by Anna Massey) first introduces herself to the duffel-coated Mark (Karlheinz Boehm).   Here is the scene: 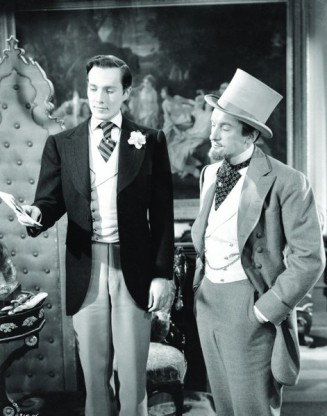 George Sanders - with his hat on indoors of course

After a short burst from Suggsy ("Education, that's what I need") track 4 is 'Calico', which I like to think refers to the character played by Diana Dors in Tread Softly Stranger, although the lyrics do not really support my theory. At the end of the song is another quote:

"I never take off my hat, except when I'm out of doors!"

As with The Reckoning, I had a jolt of recognition many years ago whilst half-watching The Picture of Dorian Gray, when George Sanders, playing Lord Henry Wotton, replies thus in his inimitable fashion when, if I remember correctly, being asked why he wore his hat indoors, by a small boy. Unfortunately I can't find a clip of this scene. 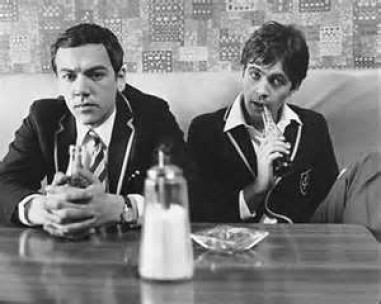 Lindsay and Essex - That'll be the day

Immediately after the George Sanders quote comes another intruiging one:

"She made a pie from Jenkins' ear

And washed it down with a bottle of beer!"

Took me a while to work this one out, and it's a film I've seen quite a few times, but after the wikipedia article on 'So Tough' suggested that That'll be the day was one of the films sampled for the album, I had another look and realised that it comes from David Essex's character, Jim Mclaine, as he abandons his education and rides off into an uncertain future, leaving his friend (played by Robert Lindsay) to go on alone to take their exams.  Here's the clip which features the lines:

I remember vividly sitting in the passenger seat of a car being driven by a friend (Paul Bates - hi Paul!), listening to this album, when inbetween the songs came the following:

Paul was so surprised - but it is of course a clip (slightly edited actually) from Billy Liar.  I was delighted to see this was again referred to in Jan 2017 in the last episode of the fourth series of 'Endeavour', where, thinking of moving to London on promotion, Morse says 'you can lose yourself in London'.  Here's the clip:

The whole of track 7, 'Memo to Pricey', is one that I cannot work out but I am beginning to wonder if it is just Saint Etienne's recording of themsevles in a pub, as it is proving so elusive.  The background music, as I found out today (July 2015) from Dazza by email, comes from a Chanel 5 advert; unfortunately, although I had the clip here before, it's since been taken down from youtube.

"It's like I can't get past that escape barrier, 'cos I like adult drinks like whiskey or lager, it's actually painful to drink first of all.."

"I bought you a double."

"Four bottles of malibu, Bob knows the address, a malibu and coke and Chinese food..."

That's how I hear it anyway - the web has versions including 'S&M barrier' instead of 'escape barrier' and " a lot of drinks like whiskey or lager' rather than 'adult drinks' but whichever or whatever is said, I can't link it to a film, and as nobody else on the web seems to have done either, maybe it's just a local recording?

My latest information, from an unnamed source (can't reveal my sources!) is that Pricey may be Simon Price, Melody Maker journalist, whom Bob Stanley would have worked with. I think it's probably something like this, as i don't think it's taken from a film.

The start of 'Hobart Paving' (surely one of the most beautiful songs ever written) is one that really niggled away at me for years:

Her: "Do you think a girl should go to bed with a fella, if he doesn't love her?"

Now that really sounds like Albert Finney to me, and I must admit a few years ago I thought it was from Charlie Bubbles, a 1967 film that was the only film he directed; but having seen it now a few years ago (I have it on DVD) I was disappointed to find that my guess was wrong.  I then thought it might be Nothing but the Best,  but I saw that film in March 2014, definitely not that film.

In the end,  I decided today [27 June 2014] to ask all the members of a group on Facebook called 'British New Wave and kitchen sink films' to see if anyone there know, and within five minutes David Silver provided the answer - it's Carol White and Roy Harper from a 1972 film called 'Made', which I've never even heard of - so I'm very grateful to David for solving that one.  Three years later (Nov 2017) I've now got the film, and here's the clip: 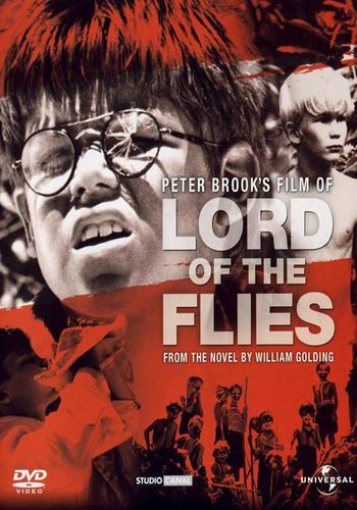 Onward - at the end of 'Hobart Paving' there is a very short line - "I wish they wouldn't laugh", which I've only just found out, again from Dazza in July 2015, is Stephanie Routledge in Alan Bennett's 'A Woman of No Importance', and then all sorts of bits and pieces on Track 10, 'Clock Milk' (such as "Daddy can I go to the hop?"), before a couple of lines spoken by children at the end of Track 11, 'Conchita Martinez':

"Maybe he means it's some sort of ghost"

"Maybe that's what the beastie is - a ghost"

I always thought that this was likely to be from The Innocents, but in fact it's from the 1963 film Lord of the Flies (again, wikipedia gave me the clue as to where to look).

After the end of Track 12, 'No rainbows for me', there is a short line "Well that last one didn't sound too furious" which sounds like one of those strange 60s albums trying to educate kids about classical music (The Fall used a lot of stuff like this on one of their albums many years ago).  [Stop press:  I was right.  Alex G has e-mailed to inform me that this comes from a London Records sample LP called 'A journey into stereo sound' from 1958].

We then come to 'Here come clown feet' (Track 13), which starts off with some tap dancing, whch again Dazza in July 2015 has told me comes from the 'Lullaby of Broadway' sequence from the 1935 film Gold Diggers of 1935 (I should have spotted this, I am a big fan of the Busby Berkeley moives of the early-mid 30s prodcued by Warner Bros), showing me the link to this clip: 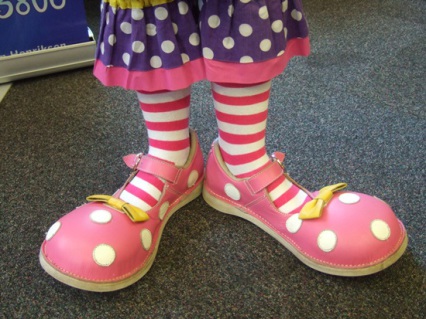 "Won't look so ridiculous will it?"

We then have the following legendary exchange:

"You stick your foot in there mate and you're..."

"What's the weight got to do with those shoes?"

"Because she can help lose weight in her legs, well, it won't look so ridiculous will it, well fat legs with chunky shoes, will it?"

This is from 'The Family', one of the first (if not the first) fly-on-the-wall documentaries, about a family in Reading, made in 1974. I think I watched it when it was repeated, probably in the early 80s. After much trawling through various versions and episodes, here at last is the clip in all its glory (13:39 into this third episode):

And apart from "Can I take your order?" at the end, which I assume is just lifted from real life, that's about it; subsequent albums didn't have quite so much lifted from films and TV.

Grateful for any thoughts on the above, or any 'spots' which I haven't worked out yet.  One day...

I found an email in my spam folder via the contact page of this website, I just skim read it and saw it was from 'ramzy...' and was to do with this page, but then when I deleted all the other spam messages this one went as well by mistake, it was sent around 13 September, so 'Ramzy' if you read this please send the email again and I will reply - sorry!