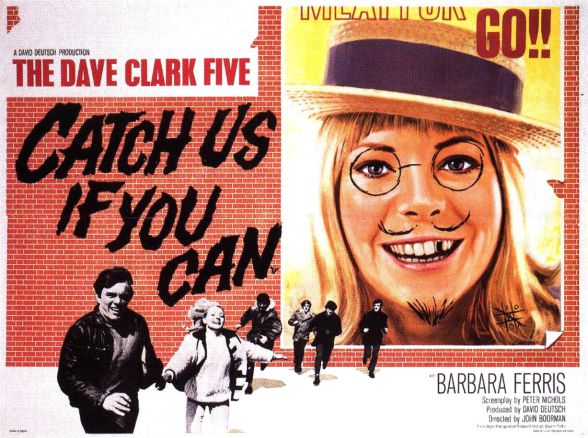 Clearly designed to be an imitation of, and cash in on the success of, A Hard Day's Night, released the previous year, 1965's Catch Us If You Can (hereafter CUIYC) turned out to be rather different to The Beatles' film and quite special in its own right.  It starred The Dave Clark Five, almost regarded at the time as rivals in popularity to the Fab Four, and was direccted by John Boorman, who went on to direct films as diverse as Deliverance, Point Blank, The Emerald Forest and Excalibur.  The start of the film showcases the title song and the band's 'wackiness',which might make the heart sink at the sheer craziness of 'the young people of today': 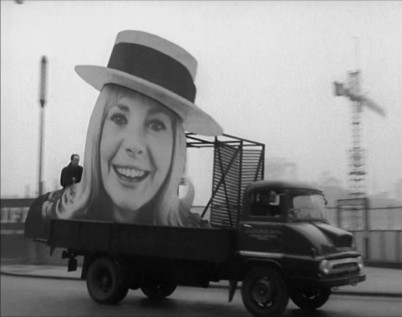 Thankfully though, there is a key differnece between CUIYC and A Hard Day's Night in that the band members don't play themselves in CUIYC, and there is actually a plot (this is not a dig at AHDN, I love this film but it would have been ridiculous to just do exactly the same thing).  Dave Clark himself plays Steve, a stuntman (as are the other members of the band) who is under contract to the Meat Marketing Board with their nationwide campaign of 'Meat for Go!', featuring the Meat for Go Girl herself (Dinah, played by underrated 60s darling Barbara Ferris).  Dinah however is disillusioned, and when Steve says he wants to' get away from it all', she is only too willing to run off with him in the middle of a shoot in Smithfield meat market (where I just about managed to spot Alan Lake as the director of the commercial), with the vague idea that they will go to Dinah's island which she has allegedly bought, as seen in this lengthy sequence: 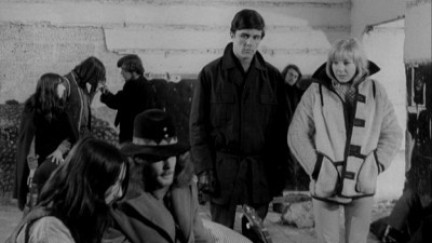 The forces of law and order, in the form of Leon Zissell (played by David de Keyser) and Duffle (Colin Swift, bizarrely seen reading Burroughs' 'The Naked Lunch' at the start) are in pursuit of the runaway duo, although Leon is playing the situation for all its worth, feeding the press stories that Dinah has been kidnapped.  En route Steve and Dinah meet a group of hippies (or were they called beatniks then?) on Salisbury Plain which is the first of a series of two or three encounters which reminded me very much of Lindsay Anderson's O Lucky Man! nearly 10 years later.   The hippies are led by Ronald Lacey and Sheila Fearn, one of my favourites due to her role as Audrey, Terry Collier's sister in 'The Likely Lads' and 'Whatever Happened to the Likely Lads?'. 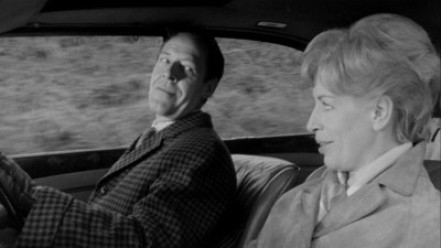 As the army then, for unexplained reasons, attack and round up the hippies, Steve and Dinah escape and immediately get a lift (try that these days and see how far you get) from married couple Guy (Robin Bailey) and Nan (Yootha Joyce, building up that now-famous Mildred persona which she played to perfection in the 70s).  They get taken in by the couple, who clearly have their own reasons for wanting to look after the two runaways, and after a freshen-up and lunch, and a quick call to get the others down to join them, they all end up at a fancy dress party where Leon's henchmen and the Press are waiting.  They get away of course, and find some time on their way to Louie's farm to wander in the countryside with the band's 'When' as a melancholy and wistful background: 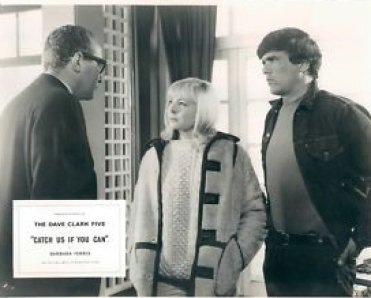 There is another period of respite when they reach Louis' farm (Louis being played by David Lodge) but Steve is depressed to find that Louis does not remember him, and gets his name wrong (even after he has been told what it is), although Steve doesn't seem to see the situation from Louis' perspective (why should he remember Steve from many years ago, particularly as Steve has only turned up there for his own convenience?).

Once the rest of the band arrive all six of them head down to Dinah's island, chased by Leon's minions, but once they get there they find that not only is it not a real island (it's a tidal island, filmed at Burgh Island down in Devon) but that Leon is waiting for them anyway, having known all along where they were headed; it turns out that he was just using the idea of the chase as a promotional device, realising its potential to sell more product.

And this is the real difference between CUIYC and AHDN; the former is a deeply cynical film, born of disillusion, showing how youthful exuberance and vitality is ultimately (ab)used in a commercial world.  Dinah plays up to the camera whilst Steve drives off with the rest of the Dave Clark Five, although it is by no means clear who has sold out, and who has retained their integrity. 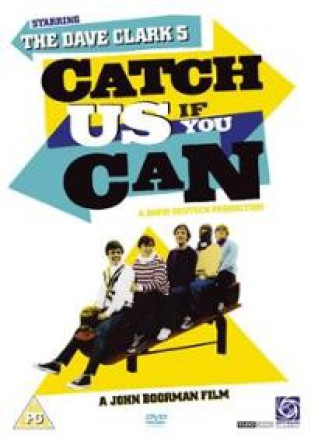 The DVD seems to have gone up in price again, now almost £8 from play.com for example, and I can't see it in its entirety on youtube.  I think it's well worth hunting out though, as I really like it and find it an unusual and likeable film, not what you might expect from a film promoting the Dave Clark Five (although, unlike AHDN and Help! etc, it doesn't really promote the group apart from having their music featured throughout.)  I knew very little about the Dave Clark Five before I saw this film, and I still don't really (in any case the other four members have nothing to do, and do not emerge as individuals in any way, unlike in AHDN).

It feels much more like an anti-Swinging 60s film masquerading as a Swinging London film at times, like Morgan: a suitable case for treatment and Blow Up, rather than a band promotion film; not everyone's kind of film but I thoroughly recommend it.