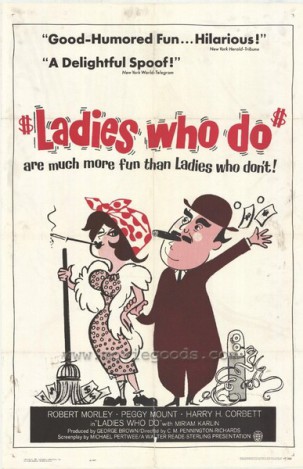 Ladies Who Do is a very typical example of the post-Ealing Ealing comedy.  There were a great many of these kinds of films in the late 1950s/early 1960s, quite a few with stalwarts like Alastair Sim (School for Scoundrels, Left, Right and Centre etc), usually with a generous sprinkling of seasoned comic character actors, many of whom one doesn't know the name of but knows that one has seen them somewhere before.

Ladies Who Do boasts a whole host of such actors. Starring Peggy Mount, Miriam Karlin (in a bizarre hat throughout), Avril Elgar and Dandy Nichols as the 'Ladies who do', with Robert Morley as their partner, and Harry H Corbett as the villain of the piece, ably hindered by Jon Pertwee. The films also features Arthur Mullard, Graham Stark, Brian Rawlinson, Ron Moody, Harry Fowler, Cardew Robinson, John Laurie, Nigel Davenport and others -  I don't think there's a speaking part in the film where I don't think 'Now, where have I seen him before?'.

This is one of the great strengths of the film; the other is the plot.  For once, the script (by Michael Pertwee, brother of Jon and cousin of Bill, who was later to find fame as the irascible Air Warden Hodges in Dad's Army) was an original, from an idea by John Bignall. Four office cleaners (Mount, Karlin, Nichols and Elgar - the ladies who 'do') clean offices in the City, one of which belongs to Tony Ryder (Corbett), a property developer. Although they are keen to keep secrets from their rivals, they are somewhat careless in leaving documents lying around and having conversations within earshot of the cleaners.

Mount's character, Mrs Cragg, picks up a cigar wrapped up in a bit of paper thrown into a waste paper bin, and takes it to one of her other clients, the Colonel (Morley) as a little treat. The piece of paper turns out to contain information regarding the share price of a company that Ryder is involved in, and as an inveterate (but unsuccessful) gambler and speculator, the Colonel realises the value of the information and makes £5,000 on the stock market. He has already promised Mrs Cragg half the money, and after a short battle with his conscience, honours his promise. 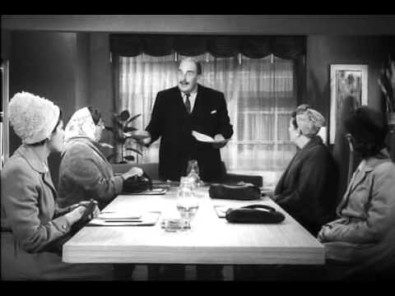 Mrs Cragg initially decides to return her portion to Ryder, but before she can do so she finds out that he is in fact planning to pull down Pitt Street, where she and her friends live, as part of a new property development that he is heavily committed to financially. At this point she and the Colonel hatch their scheme; using the information that they can retrieve from the bins in the offices they clean, and with the Colonel's knowledge of the stock market, they can make a fortune. There is a lovely little scene where Mrs Cragg hands the Colonel a list of names, asking if he knows any of them. He replies that of course he does, they are all high-powered financiers.

"No, but I know the ladies who do!" she replies in truimph.﻿ 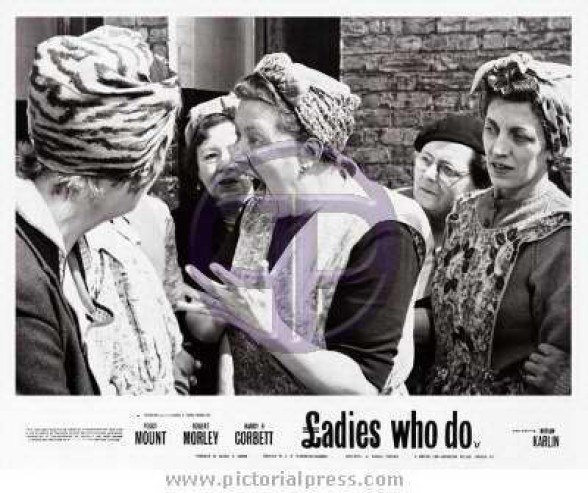 The film then follows the fortunes (literally!) of the ladies and the Colonel in their battle against the forces of injustice.  This is very Ealingesque in its depiction of the 'small is beautiful' ethos as they rally against the forces of bureacracy and tyranny (a la Passport to Pimlico).  As so often with these films, they are not laugh out loud films, and the humour is gentle and, to be honest, obvious and predictable.  But that is part of their appeal I think; you know that Ryder is going to be defeated, you know that the ladies will get to stay in Pitt Street, you know that all will turn out alright in the end.  It would hardly be a comedy if it didn't...

This scene captures the humour of the film very well, as Ryder is thwarted in his attempt to demolish Pitt St by the machinations of the ladies: 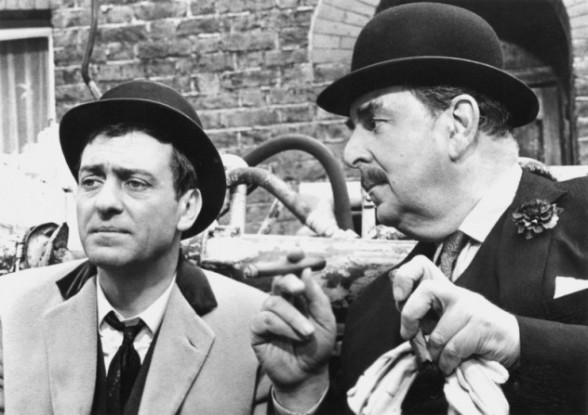 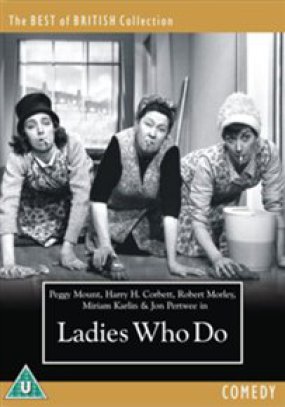 The front cover photo, which is not a still from the film but is clearly a publicity photo, for some reason omits Dandy Nichols (yet includes Avril Elgar, who, like Nichols, is not named in the cast list on the front whilst Jon Pertwee, who has only a minor role, is).

Released in 2008, there are no extras as such but it does come with quite an informative booklet. The whole film can be watched on youtube.