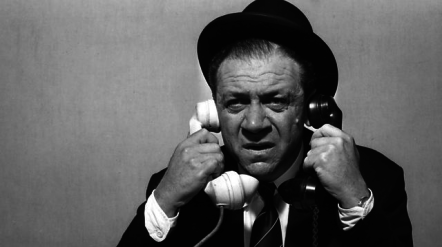 Born Solomon Joel Cohen in South Africa, Sid James (he changed it first to Sidney Cohen, then Sidney James), worked (or claimed to have worked) in a variety of jobs, including as a boxer, but rather surprisingly he actually trained as a hairdresser (allegedly).  He moved to Britain straight after the war, and got small roles in two 'spiv' films, Black Memory (1947) - his first screen appearance - and Night Beat (1948) as 'Nighlife' Nixon, a piano player and police informant at the nightclub featured in the film.

Numerous other roles followed, including the (deservedly) much-maligned No Orchids for Miss Blandish, where he receives a bottle in the face for his troubles, although in most of these films he was not playing a comedy role, although in some cases - 1951's Last Holiday, starring Alec Guinness, is a good example - he plays a role quite familiar to us now, as a slightly iffy wheeler-dealer, or loveable crook, as in Ealing's famous The Lavender Hill Mob, teaming up with Alec Guinness again.  Here's the scene where Holland (Guinness) and Pendlebury (Stanley Holloway) recruit Shorty (Alfie Bass) and Lackeryy (James): 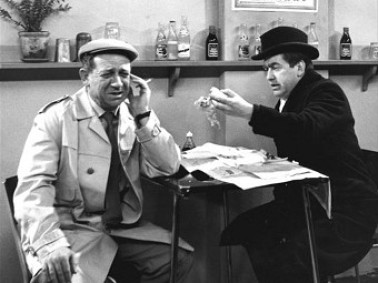 James continued to work steadily in the early 1950s - he was, according to wikipedia, in 9 films in 1952 alone - but his big break came in 1954 when he teamed up with Tony Hancock.  Starting on radio, and later transferring to TV, Hancock's Half Hour set James' image for the 50s/early 60s generation; a wheeler-dealer verging on criminal, with his endless suspect schemes that he drags a naive Hancock into, James was just about the only other regular member of the cast that survived the transition to television, whilst Kenneth Williams, Hattie Jacques and Bill Kerr were slowly sidelined.  Even that wasn't enough for Hancock; he was worried that they were being perceived as a double act - as indeed they were - and James was dropped from what turned out to be the last series, just entitled Hancock, in 1961. By now though James had made his Carry on debut in Constable (the third film of the series, made in 1960) with a fully established comic persona.

James worked ceaselessly throughout the 1950s, combining his work with Hancock with generally minor roles in a variety of comedy and non-comedy films, many of which I haven't seen as they rarely get shown these days.  He was somewhat miscast in Escape by Night (1953) as Gino Rossi, an Italian crime boss who has to go on the run but agrees to give his life story to a jaded journalist, and his appearances in films such as The Belles of St Trinian's are very much of the 'blink-and-you'll-miss him' kind.

He continued to play in dramas although often, as in Hell Drivers (right), he had a peripheral role.  One film which promised much, but again where James was rather underused, was the fitfully amusing Too Many Crooks in 1959.  This comedy crime caper starred George Cole as Fingers, the utterly incompetent leader of a gang featruing James playing - surprisingly - Sid, with Bernard Bresslaw as Snowdrop and Joe Melia as Whisper.  The film is stolen though by Terry-Thomas and Brenda de Banzie as William and Lucy Gordon; after yet another disasterous job Fingers hits on the idea of kidnapping Gordon's daughter, thereby forcing him to pay the ransom.  What could possibly go wrong?  Plenty, as this scene shows: 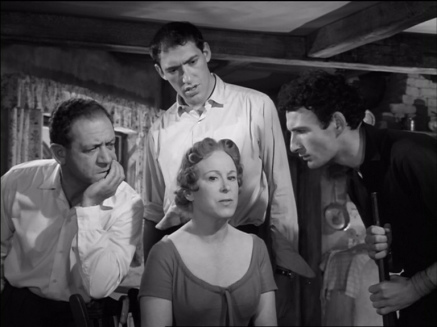 Sid James, Bernard Bresslaw, Brenda Banzies and Joe Melia in Too Many Crooks

Not only is the kidnap attempt a farce, it is no great surprise that they manage to kidnap the wrong person, Gordon's wife (Banzies) rather than his daughter, and Gordon doesn't want her back!  As before in the marvellous Hobson's Choice, Banzies' forceful character shines through and she takes over the gang (not difficult, as it's hard to find a brain cell between them), deciding to not only get Gordon's money (which he keeps under the floorboards in his house) but also all the jewellry that he lavishes on his mistress (Delphi Lawrence).  Mishaps and misunderstandings galore ensue, but of course in the 1950s crime could not pay so the ending is rather predictable.  Despite its many fine moments, usually featuring Terry-Thomas, the cast is overall not quite up to it, and James is used so little that I can only think that at this time he was so busy with his Hancock TV and radio work that he just wasn't able to take on more substantial roles. 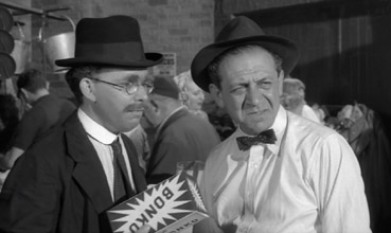 One film where he does have a more prominent role was Make Mine a Million, released in the same year as Too Many Crooks.  This lively but gentle satire on TV advertising unfortunately 'stars' the appallingly unfunny Arthur Askey, and although he certainly spoils the film he doesn't quite manage to ruin it.  To avoid any confusion, Sid plays Sid Gibson, a slightly seedy salesman trying to flog packets of Bonko (oo-er!) washing powder; whilst Arthur Askey plays Arthur Ashton, who works for a thinly-disguised BBC (called National Television here) and manages to get Sid's Bonko some national TV exposure.  In this scene, also featuring Bernard Cribbins, they use some novel guerilla tactics to achieve their aim:

The film peters out somewhat with some typical 50s comedy shenanigans - they get involved with some criminals, but they save the day - but the film would have worked so much better without Askey, who particularly ruins a cringeworthy scene where he gets roped into a ballet on stage.  Within a year James had featured in his first Carry On (at the time the early Carry Ons were very much in the mould of British comedy films at the time) and although he continued to feature in a number of films the Carry Ons became his staple work.  He did however still find time to slot in the odd film, with a good example in the early 60s being an Ian Carmichael vehicle, Double Bunk. 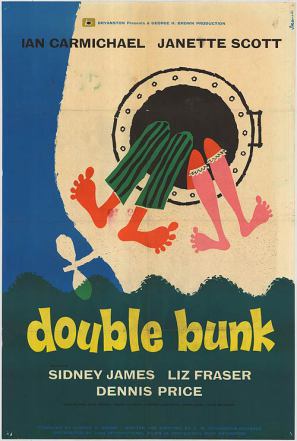 Double Bunk was really a four hander with Ian Carmichael, Janette Scott, James and Liz Fraser, but as can be seen from the poster on the right the first two got top billing.  Directed by C.M Penington-Richards, who went on to make Ladies Who Do (see elsewhere on this site), this is an amiable romp but which never quite reaches the heights one might have hoped for.  Carmichael and Scott play a young couple who need somewhere to live, and they hit on the idea of a houseboat, not realising that the current owners can't wait to sell it.  Once they move in their unscrupulous 'landlord', played by Dennis Price, soon increases the mooring fees, but with Sid (accompanied by Liz Fraser) ready to help, they take on Price and his yachting cronies in a race back from France...

There were lots of these kinds of films in the late 50s and early 60s, pleasing enough to watch but rarely raising much more than a wry smile or a polite chuckle; looking back it is easy to see that what the Carry On films brought to the picnic was some much needed boisterousness, all too often films like Double Bunk leave one crying out for some genuine anarchy and subversion.  What Double Bunk also lacks is some eye-catching comedy support, in the way Lionel Jeffries stole all his scenes in Two Way Stretch or The Wrong Side of the Law, but what it does have unfortunately is a truly awful theme song.  The trailer below gives a flavour of the film: 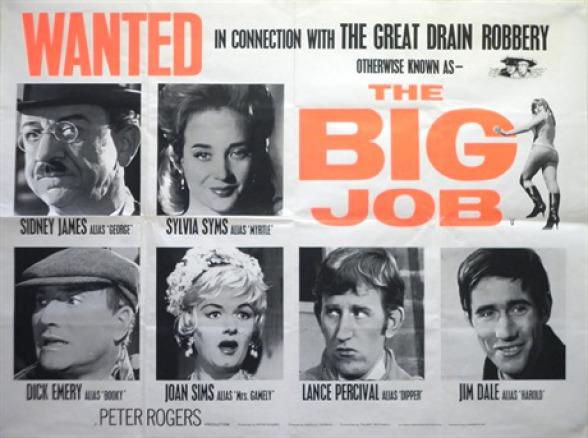 The Big Job came right in the middle of a long stretch of Carry On films, and it's really a Carry On film in all but name; it could easily have been entitled Carry On Robbing or Carry On Crime.  It was produced by Peter Rogers, directed by Gerald Thomas and scripted by Talbot Rothwell, with CO stalwarts Joan Sims and Jim Dale alongside James.  It seems to have been filmed between Carry On Cleo and Carry On Cowboy, but I prefer it to many a CO film, as this one actually has a proper plot.  James plays George Brain ('the great Brain'), with his hapless sidekicks Fred 'Booky' Binns (Dick Emery) and Tim 'Dipper' Day (Lance Percival) and his ever-loving girlfriend Myrtle (the beautiful Sylvia Syms) simpering alongside him.  The following scene, right at the start of the film, sets out the situation very nicely:

Inevitably it all goes horribly wrong, and they end up in prison for the next 15 years (nowadays, they'd probably only get probation); but they still have the money stashed away, so all they have to do is go and collect it, but there's a problem because - well, why have me tell you the plot when you can see for yourself?  This is a really excellent self-made trailer I found on youtube, many thanks to 43shen for this: 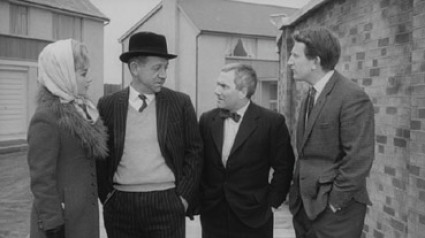 The problem of course is that the money, hidden in an old tree, is now in the grounds of - of course - a police station, so our bungling foursome rent rooms out opposite as the Great Brain works out a plan to get the loot back.  Joan Sims and Jim Dale manage to get a couple of good roles for themselves, the latter as a keen but naive young copper and Derek Guyler as his long-in-the-tooth Sgt whose sole interest in life is the police choir.  The Big Job is one of three films, along with Make Mine a Million and The Lavender Hill Mob, on the Sid James Collection DVD. 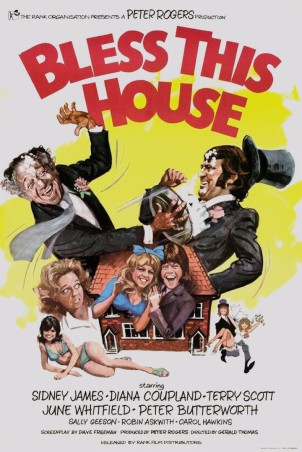 According to wikipedia anyway, there were only two or three more non-Carry On films - Three Hats for Lisa, Where the Bullets Fly and a film I've never heard of, Tokoloshe (although this might be because it doesn't seem to exist according to imdb) but James' last non-Carry On film was Bless This House, that most 70s of phenomena, the TV spin-off feature film. I must have seen this film at some point, but it has not stayed in the memory, but looking at the poster I would guess that one of his kids gets married, probably his daughter, and as the father of the bride he goes through various trials and tribulations but it all ends (reasonably) happily.  (Just looked on wikipedia, that all appears to be nonsense, although there is a wedding scene).

Anyway, it may well be a spin off from the TV series, but once again it was made by the CO team of Peter Rogers and Gerald Thomas, with the script by one Dave Freeman, and my research (yes, I do do some) tells me that he used to write for Arthur Askey and also wrote Carry On Behind, so that tells me all I need to know about the level of wit on display.  Never mind, the TV series as I recall was mildly amusing, and Sid James was always worth watching, even when he was on cruise control as he was here.  Allegedly (and I must admit this does sound apocryphal) James told his co-star Diana Coupland that they would continue to make Bless this House "until one of us kicks the bucket".  Sadly this turned out to be the case, as more series were planned, along with a second feature film, when James died on 26 April 1976 from a heart attack.  He was only 62.