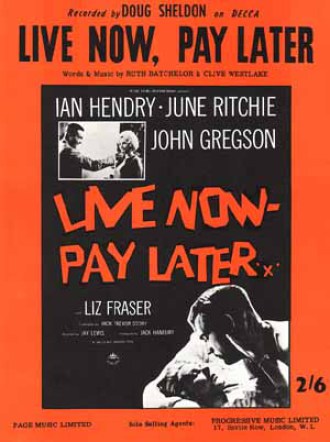 Live Now, Pay Later is a 1962 film starring Ian Hendry, John Gregson and June Ritchie that takes a blackly comic look at the 'affluent society' (a phrase introduced by John Galbraith's 1958 book of the same name).  The Radio Times Guide to Films, which I picked up in a second hand bookshop recently, giving it 4 stars out of 5, describes it as:

"...a remarkably cynical and revealing portrait of Britain shifting from postwar austerity into rampant consumerism and the Swinging Sixties"

I think that's spot on.  In the meantime poor old Halliwell's Guide gets it completley wrong as usual, when calling it:

"A satirical farce melodrama which lets fly in too many directions at once and has a cheerless cumulative cheerless effect despite funny moments".

Given that Live Now, Pay Later is not a comedy as such, this is a bit like saying that Cries and Whispers is a bit downbeat, and why don't all these miserable Swedes sort themeselves out?

As old misery guts says though, LNPL does have funny moments, and the character of Albert Argyle (Hendry) is clearly laid out in this opening clip,which also features a highly memorable theme tune, presumably written especially for the film: 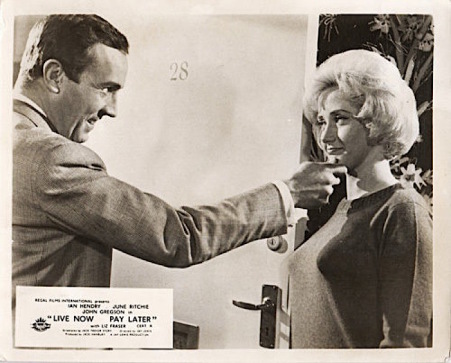 Argyle is a door-to-door salesman working for Callendar (John Gregson, complete with dodgy tash and bowtie) who has his own store in town but dreams of a new modern complex, and is scheming all-the-while to secure a plot of land he needs for expansion, which leads him to try and ingratiate himself with the estate agent Reggie Corby (Geoffrey Keen), who in turn is desperate to make something of himself by getting onto the local council, and doesn't want anything to jeopardise his ambitions.  His problem is that his wife, Joyce (Liz Fraser, above), is a spendthrift who has purchased lots of goods on the never-never from Albert as they are old friends, it is suggested (this is how I read it anyway) that they are probaby ex-lovers.

Albert seems at first to be a loveable rogue (see clip above), but we get a very different picture of him when Treasure (June Ritchie) turns up at Callendar's, looking for Albert and wanting to drop off all his unpaid bills.  It turns out that he left her high and dry when she had his baby, and it becomes clear that he is a heartless bastard, who doesn't even know the sex of the baby, let alone its name.  Albert pursues Treasure throughout the film, although it is never clear why exactly, as he makes sure he has enough 'special' customers, such as Nyree Dawn Porter, to liven up his working day.  Treasure, although weakening on occasion, sums Albert up neatly at one point:

"You're lying again, you're still lying!  Your whole life's a lie, your job's a lie, you're just one big bloody lie!"

The following scene sums up Albert's attempts to ingratiate himself with Treasure, as she allows herself to be taken in by him yet again:

It also turns out that he has done all this before, as he turns up at the chaotic home of Grace and Fred (Peter Butterworth), where Fred is, presumably unwittingly, bringing up one of Albert's children from an earlier relationship with Grace. 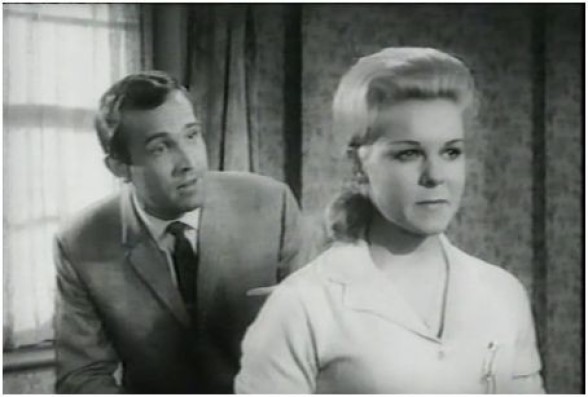 Albert, as usual, imploring Treasure to do something she will no doubt regret later 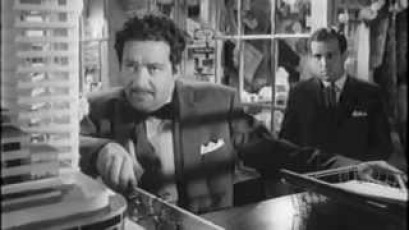 Del Boy had his braces, Callendar his bow tie

The key element of the film, for me, is that it is not only Albert who is depicted in a cynical manner, forever dodging his creditors, but everybody else is shown to be only in it for what they can get, apart possibly from Treasure, Grace and Fred.  Corby, for example, is an extremely unattractive, oily character, who even when tragedy strikes (if this is a comedy, it's a very black comedy) thinks only of himself.  Callendar, who is shown to be an old tally man hiimself (Albert has evidently picked up some of his phrases), is being used by Albert but in his turn does not want to get rid of him as he needs Albert as his best salesman.  There is a telling exchange between Callendar and Albert towards the end, as Callendar says:

Albert: "Yeah, to con them into buying a whole load of stuff they don't need and can't afford"

"What you are talking about?  There's a nasty little streak of honesty in you Albert, you wanna watch that.  It's bad for business." 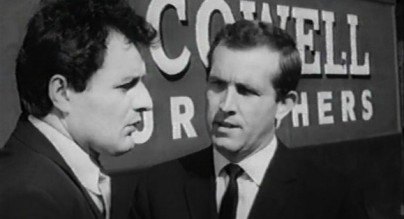 Peter Bowles, as a rival salesman, gets completely hoodwinked by Albert

In the meantime Albert continues to dodge his numerous creditors, especially a zealous 'repo man' who makes several attempts to get Albert's car back off him for not keeping up with payments, whilst still finding time to get one over on Callendar's local rivals, Cowell's, by conning a new salesman (Peter Bowles) and managing to steal an order for a house full of new furniture from under his nose.

But this is no 'Adventures of a Salesman'- style romp; Albert has too many responsibilities, and lets down too many people, for that, and he himself knows that he is not entirely innocent when it comes to his part in getting others embroiled in debt.  As the bailiff Mr Weatherhead (Michael Brennan) says to Joyce Corby:

"Public Enemy number 1, our Albert.  Always getting people into trouble.  You housewives allow these smart alec tally boys to get you into a load of debt and then you're frightened to tell your husbands."

The full implications of this statement are seen later in the film, as Mr Weatherhead has to return, unfortunately when Corby is trying to impress some guests:

As befits such a film, there is no resolution as such, and the film ends pretty much as it began, with Albert back doing what he does best; selling goods and seducing housewives, sometimes separately, sometimes together. 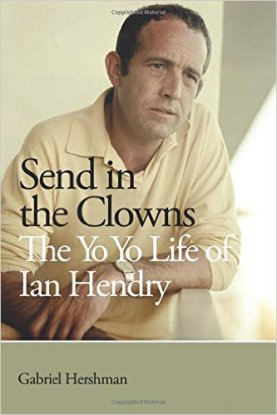 At this stage in his career it seemed that Hendry was being groomed, or was destined, for stardom.  He was also in The Beauty Jungle, another 'affluent' film, and was reunited with June Ritchie in This is My Street, another unsung film which I've also written about on this website here.  He also played a very different role in The Hill with Harry Andrews and Sean Connery a couple of years later, as well as his TV work (he was in the Avengers originally).  But something went wrong; by the time he played Eric Paice in Get Carter in 1971, there were apparently drink problems, and I was fascinated to read that originally he was to have actually played Carter!

A book from a couple of years ago, Gabriel's Hershman's 'Send in the Clowns', descirbes it as a 'yo yo' life; I'm not a great reader of biographies, but this is one I do intend to look out for as I feel that Hendry was not far away from the big time at one stage. 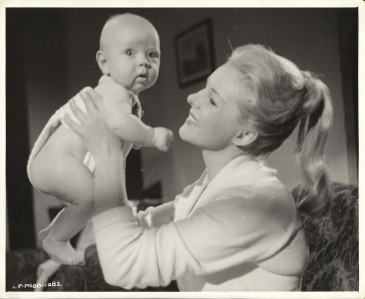 June Ritchie plays a completely different character to the mousey, dull Ingrid of A Kind of Loving (which came out in the same year I think, not sure which was filmed first), in fact she is more like her characters in the other films I've seen her in, such as The World Ten Times Over where she played opposite Sylvia Syms, or This is My Street.

That baby doesn't look real by the way, like something out of Children of the Damned... 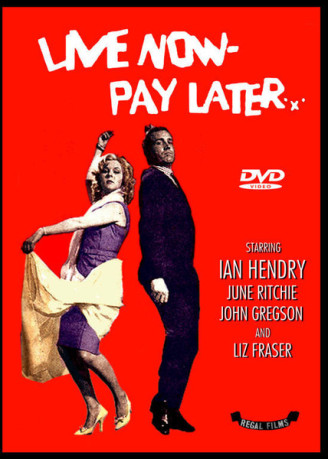 Despite the picture on the right, I still can't find LNPL on DVD at the moment; I got my copy through stojo.com for £3.99 (+P&P, although I ordered enough films not to have P&P),and it's clearly recorded off Channel 4 TV, probably in the 1980s by the look of it, which explains the so-so quality of the clips.

There are a couple of clips on youtube, alongside the ones I've uploaded, including one where Albert cons a housewive into buying a hoover, but not the full film.  However it can be downloaded from http://ianhendry.com/live-now-pay-later-1962/live-now-pay-later-1962-complete-film/.  It's well worth seeking out, as the British film world in the early 60s was not all bleak Northeners and whippets (actually, not sure I ever saw a whippet in those films) but there was much more variety and a much wider range than is usually acknowledged - which is why I started this website I suppose.