From the Gillian Freeman novella published 1961

Gillian Freeman's novella, published in 1961 under the pseudonym Eliot George

Freeman's book was published under the pseudonym Eliot George, and has become a gay cult classic.  It was almost immediately turned into a film, but there was a delay of about a year before the film was distributed.  I think very few people who like the film have read the book; were they to do so, they would be quite surprised to find out how different the book is.

The plot of the book follows Dick and Reggie, and describes how their friendship turns into a sexual relationship.  The book opens with Dick's grandfather's death; he then moves in with his grandmother.  He is bored, and meets up with Reggie at a local caff.  Reggie is 18 and has already been married (to Dot) for a year, although the marriage has already died and he suspects (correctly) that Dot is unfaithful to him.  The title of 'The Leather Boys', a rather suggestive one these days, refers to the biker culture that Reggie is part of - but not Dick, as, bizarrely compared to the book, Dick doesn't own a motorbike!

They form part of a gang with Les, one of the boys that hang around the caff, but Les is a thug who starts out committing wanton acts of vandalsim, before graduating to small-scale robberies.  Dick and Reggie go along with this, more out of a need to be involved than any particular criminal tendencies.

We get an idea of Dick's inclinations at his grandfather's funeral, when he reluctantly goes out with Rose, a 16 year old cousin:

She stopped walking suddenly and turned towards him passionately.  "Kiss me, Dickie."

Horrified, his mouth touched hers, and her lips seemed to grow like the fleshy tentacles of a sea anemone and draw him into the wet, dark, devouring cavity within.  He tried to draw away, but she clung to him, her body flattened to his, her arms and her legs and her mouth holding him.

At last she relaxed, panting, and let her head loll on his chest.

"That was lovely," she said.

He was shaken and disgusted.

There are further clues when Dick and Reggie go to Southend on a Sunday on Reggie's bike, and pick up two girls - Dick is clearly not keen, but Reggie, after initially playing 'the lad', suddenly resents his girl and compares her to Dot.  This scene is played out, with a bit of variation, in the film:

They manage to ditch them both and that night Reggie stays with Dick at his Gran's house, and they kiss whilst in bed, and the start of the next chapter makes it clear that they have had sex.

As Dick's parents try, unsuccessfully, to get his Gran into a home, Reggie leaves Dot and moves in with Reggie.  They take part in a robbery at a shop, but Dick then gets the idea of the two of them joining the Merchant Navy, and goes off to Southampton to make enquiries and finds out there is a ship going to Australia in twelve days.  Before he leaves however he goes into a nearby pub, where he meets some openly gay characters:

Dick thought of the ugly, middle-aged powdered faces.  He had never seen homosexuals like them before.  He had never thought of his relationship with Reggie as being homosexual, he hadn't labelled it or questioned it.  It wasn't like this.  They would never be like these men.

In the meantime Reggie goes to see Dot, to try and tidy up his affairs, and rashly says that he will see her OK financially, as he is about to come into some money.  Dot goes to the caff (the only time she does so in the book) and tells Les that Reggie has been going around saying that he's going to get some money soon.  She soon regrets this, as Les immediately senses that Dick and Reggie are planning on their own robbery.

On the evening of the robbery at the local Ritz cinema, Les has them watched and is waiting for them outside the cinema.  They fail to get any money anyway (they can't get into the safe!) and as they come out the rest of the gang set about them with chains and razors.  The rest of the chapter is seen from Dick's perspective, as he realises that Reggie has been killed.

The last two chapters cover the court case, as Les is charged with murder.  Dick and Dot meet for the first time in the court canteen, before Les and the others are all found guilty and sentenced (Les gets 14 years for murder).  Dick leaves on Reggie's motorbike, still thinking about going to sea. 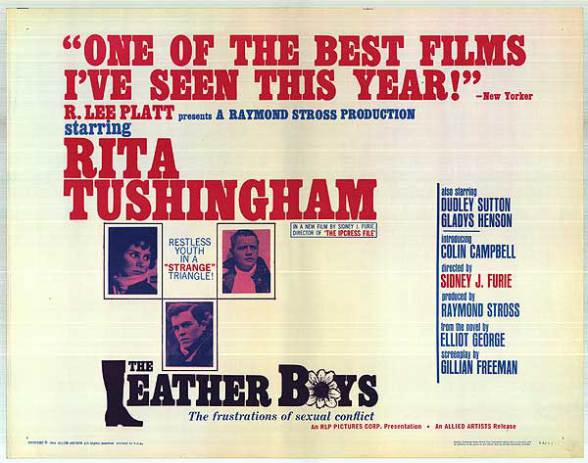 Although Freeman wrote the screenplay (in a nice touch, the film's credits state "Screenplay by Gillian Freeman, based on the novel by Eliot George"), the film is very different in plot, tone and emphasis.  To start with, as can be seen from the poster above, Rita Tushingham's role is foregrounded, although in the actual book her character, Dot, is a very minor role.  The film was marketed very differently; partly this was due to censorship - the homosexual relationship between the two male leads is only hinted at, although it is made rather more explicit at the end - but, as this trailer makes clear, much more emphasis was placed on the marriage between Dot and Reggie.  This is partly because the director's previous film was The Young Ones, referenced clearly at the start of the trailer: 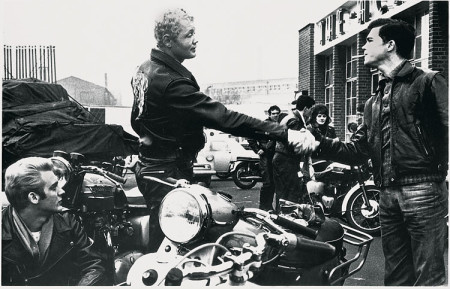 The first noticeable difference in the structure of the film (tallying with Rita Tushingham as the 'star' of the film), is that Dick (now called Pete) doesn't appear for almost the first 30 minutes of a 1 hour 45 minute film.  Instead the whole half hour (28 minutes to be exact, just timed it!) is taken up with the story of Dot and Reggie's courtship, marriage and honeymoon - none of which is in the book at all!  Dot frequently accompanies Reggie to the Ace Cafe (standing in for Nick's caff in the book) and rides with him - in the book she only goes to the caff once, when she goes to see Les, and plays no part at all in Reggie's hobby.

Another straight plot difference (albeit one that doesn't really affect the film version) is that it is now Reggie, not Pete/Dick, who moves in with his Gran, although this does provide for some 'filler' to the film (the book is very short, only 122 pages, really a novella) as it becomes a plot point when Dot refuses to move in with Reggie's Gran, leaving the way clear for Pete (whose home we never see in the film) to move in instead.

The biggest difference however between the book and the film is that the criminal element, involving Les and his gang at the caff, is completely removed.  It would be fascinating to know why this was done, but my guess is that it turns the film into much more of a case study of three people - as the trailer says, 'Three lives ripped savagely apart!' - rather than a B-movie style crime film involving youth.  There is a character called Les in the film, but he is a very minor, totally benign character whose only function in the film is to organise the London-Edinburgh motorcycle race (which, needless to say, is a complete invention for the film, not featuring in the book at all).  This is why I was so surprised when I read the book to see that the film doesn't really follow the structure of the book at all.  Some elements remain - the trip to Southend where they first pick up, then lose, two girls, the story of Gran on her own, fighting not to go in a care home, the desire to go off to sea with the Merchant Navy - but the narrative flow of the film has changed.

The London-Edinburgh bike ride does provide an opportunity for Dot and Reggie to get back together again, but when Reggie goes back to Dot the next morning, she is in bed with Brian (played by Johhny Briggs, Mike Baldwn from 'Coronation Street') and he finally realises that there is no chance of a reconciliation.  (As an aside, the wikipedia entry for the film describes briefly the difference between the book and resultant film, adding that "Even the wife's infidelity is portrayed ambiguously" - hardly, given that Brigg's character is found in their bed!)

Walk off into the sunset - well, into the fog and smog anyway

Reggie immediately decides to take up Pete's offer to go off to sea, and so they set off (to Southampton?  Not clear), sell their bikes and see what ship they can sail with; but while Pete goes off to find out, Reggie goes into the local pub, where he meets a couple of the characters lifted from the book as described above.  It turns out that they know Pete, and things become worse when it appears that the only boat they can sail on is (a) going only to Cardiff and (b) the pub characters are all sailing with the same boat.  It finally dawns oin Reggie that they are all gay, including, of course, Pete - and he walks out and off into an uncertain future, pausing only to look briefly back at Pete with a shy grin.  This is, I think, a better ending than the book, but I just wish Reggie had said something to Pete, rather than just walk off.  Here's the scene: 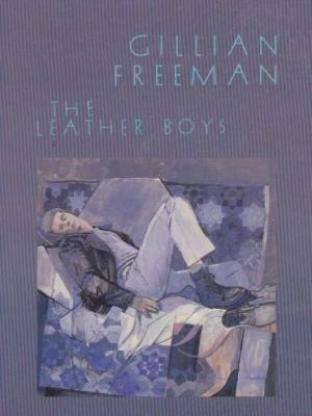 Further reading:  Obviously the book itself - I picked up a 1970s copy a couple of years ago now, with the cover as above - "The savage bestseller of Britain's Wild Ones" - but it was republished by ﻿Gay Men's Press in 1985, and you can get a copy from www.abebooks.co.uk for £5 (GMP itself closed down in 2006).  There is an interesting article on the novella by Martin Foreman on his website

The film itself is discussed briefly in 'Hollywood, England' and 'British Sixties Cinema' (see books page).  I have the standard DVD issue of the film, but it's quite poor quality really, and it now costs nearly £20 on play.com!  Unusually though, you can't see the whole film on youtube, although there are plenty of clips from the film there.  Also on youtube are lots and lots of clips of the Ace Cafe (on the North Circular Road in North London) which is where all the bikers hang out in the film.  What is needed is a new HD version of the film released on DVD (and/or Blu-Ray) - one day maybe...