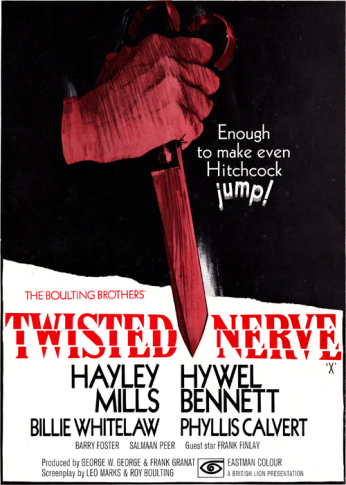 The Hitchcockian influence is acknowledged in this poster for the film

Halliwell's describes this 1968 thriller/shocker as an "Absurd, unpleasant, longwinded and naively scripted shocker...a long way behind the worst Hitchcock". With a write up like that from old misery guts himself, it seemed to me that this film had to be worth seeing - and so it proved to be.

Coming as it did from the Boulting brothers, Roy and John (responsible between them for satirical comedies such as I'm all right Jack, Private's Progress and Carlton-Browne of the F.O.), this was as unexpected as Michael Powell's Peeping Tom nearly 10 years earlier. The Boultings teamed up with Hywel Bennet and Hayley Mills from their 1966 comedy drama The Family Way but this time build a tense yet (intentionally) hilarious psychodrama centred on a fantastic performance by Bennett as Martin Durnley, who befriends a very nubile Hayley Mills whilst pretending to be 'Georgie', a person whom we would now describe as having 'learning difficulties' and as being 'emotionally disturbed' but was then described as 'backward', 'retarded', or, as Morrissey would say, 'not quite right in the head'. 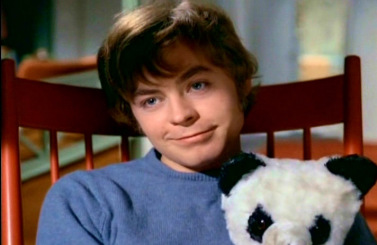 There is a tedious and unnecessary subtext - Martin has a brother with Down's Syndrome (or mongoloid, as he is frequently described in the film) and this is given as the explanation (which is then disowned in a portentuous voice over at the start) for Martin's behaviour, and at the beginning the background is filled in swiftly and economically; Martin is a waster, sent down from Oxford, living with his doting mother (Phyllis Calvert) and stepfather (Frank Finlay), whom he hates.  By chance he happens to meet Susan (Hayley Mills), a library assistant training to be a teacher, whilst stealing a toy duck from a shop, as seen in this clip: 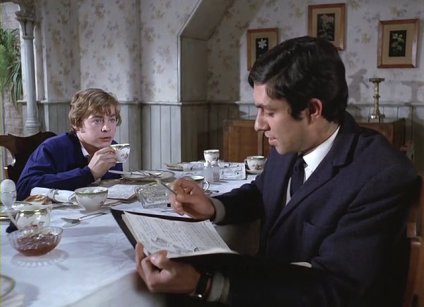 He soon finds out where she works and lives, and having arranged to make it look as though he has gone to Paris, he throws himself at the mercy of Susan and her mother Joan (Billie Whitelaw), and settles himself into the household, along with the other guests; an Indian medical student, Shashee, played by Salmaan Peer, right, and Barry Foster as the lecherous Gerry, sometime occupant of Billie Whitelaw's bed.  It's amazing how much Martin/Georgie gets away with, but these scenes, for my money the best in the film, provide the unique 'feel' of an otherwise run-of-the-mill shocker.  Joan has some doubts, but puts them aside, whilst Durnley, now safely ensconced ih the household, can carry out the second part of his plan; to kill his father.  To all intents and purposes he goes to bed one night, along with a hot chocolate provided by Susan, and says his prayers before saying goodnight, only he has other plans than sleeping:

The murder becomes the topic of discussion at the breakfst table the next morning, although Gerry is more concerned at finding out who was in Joan's bed last night, suspecting Shashee initially, but the police investigation provides a nice cameo for Timothy West, who makes the most of a regrettably short screen time as a sarcastic and world-weary police Superintendent, with Taffy Evans (Richard Davies) as his put-upon forensic support - but the film is Bennett's all the way, ably supported by Mills and Whitelaw.  As Durnley continues to play the role of Georgie, deliberately ruining a 'party' when Susan's boyfriend Philip (Christian Roberts, best known as Denham in To SIr, with Love) becomes too amorous wtih Susan for Durnley's liking, Susan becomes increasingly uncomfortable and looks forward to when Georgie's father will take him away again, but a chance discovery sets her off on her own investigation: 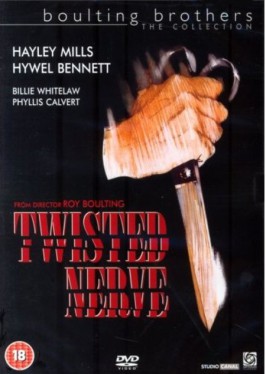 The race is on to catch Durnley before he can do any more harm, but Joan is most at risk, especially as she finds herself attracted to Georgie in spite of herself.  The final 20 minutes of the film becomes rather predictable, particularly from a vantage point nearly 50 years later, but it is the incidentals that make this film so worth watching.   THe DVD hasn't really come down much in price though, it will still set you back about £10 (Aug 2015).

And I almost forgot to mention the music, which gives the film some of its Hitchcockian flavour, as it's by the great Bernard Herrmann, composer of many of the most memorable film scores for the master (and many others of course).  I'm told that it features in Kill Bill, so you may know it even if you haven't seen Twisted Nerve, but here it is in its entirety: