MORGAN: A SUITABLE CASE FOR TREATMENT (1966) 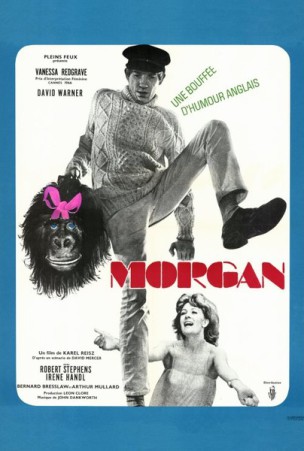 Morgan: a suitable case for treatment (hereafter Morgan) is often described as a Swinging London film, although it could be regarded as a very black comedy about mental illness.  David Warner plays Morgan Delt, who right from the start of the fim clearly has a gorilla fixation, and who it turns out has just come back from Greece whilst his wife Leonie (Vanessa Redgrave) gets a divorce from him.

However Morgan does not intend to give in that easily, and proceeds to engage in a war of attrition, doing his best to sabotage Leonie's relationship with the oily and smarmy Charles Napier (Robert Stephens). Many of these scenes are very funny, and there is no doubt that our sympathies lie with Morgan, particularly as Leonie is obviously ambivalent towards him, and still harbours a great deal of affection for him. 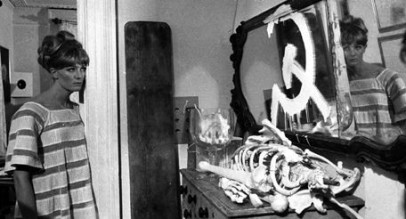 However Morgan is also the son of a committed Communist (Irene Handl) and their scenes together are some of the best in the film, as she berates him for his supposed loss of his political ideals ("I'm still wtih you inside me head Ma").  Leonie has already told the divorce court how Morgan shaved her poodle using the shape of the hammer and sickle, and this motif reappears throughout the film, almost as a calling card as Morgan lays his various booby traps in Leonie's house. In this scene, Morgan has a surprise in store for Leonie's mother: 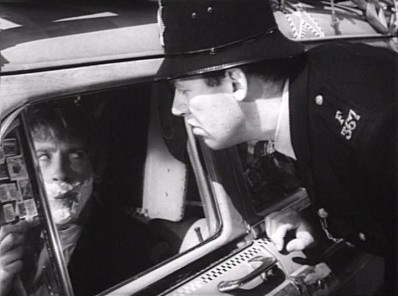 I have to admit to knowing almost nothing of the original play by David Mercer, although I understand that it was written for the TV and starred Ian Hendy, an older actor than Warner by some 10 years, and that some characters have been added and others removed, although this is not unusual in adaptations (and in any case Mercer adapted his own play for the screen).  I wonder how much of the politics has been toned down, or removed; in the film the Communist sympathies are played for laughs, for example when Bernard Bresslaw, a hopscotching constable, confronts Morgan, who is sleeping in his car outside Leonie's house (see right), or the trip to Marx's grave in Highgate cemetry by Morgan and his mother, where she reminds him of his father's views:

"Your Dad used to love coming here. You know he wanted to shoot the Royal family, abolish marriage,and put everybody who'd been to public school in a chain gang.  Yes, he was an idealist, your Dad was." 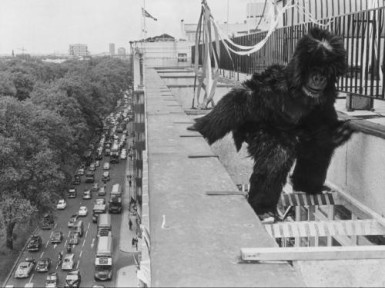 Morgan is surrounded by, and surrounds himself by, images of the wild, and gorillas in particular (even his mother's partner, Wally [the inimitable Arthur Mullard], is an all-in wrestler who goes by the name of Wally the Gorilla), and this is reinforced by his daydreams of reverting to a jungle-like state, often illustrated with intercut scenes from King Kong and Johnny Weismuller's Tarzan films.  He even starts beating his chest in front of the Marx memorial, to which his mother complains that he is being "disrespectful".  Morgan himself has a stuffed gorilla at the house, and later gets hold of a complete gorilla costume, in which he carries out his final revenge attack on Leonie and Napier at their wedding.  It is perhaps this that finally blurs the edges of what is real and what is fantasy for Morgan. 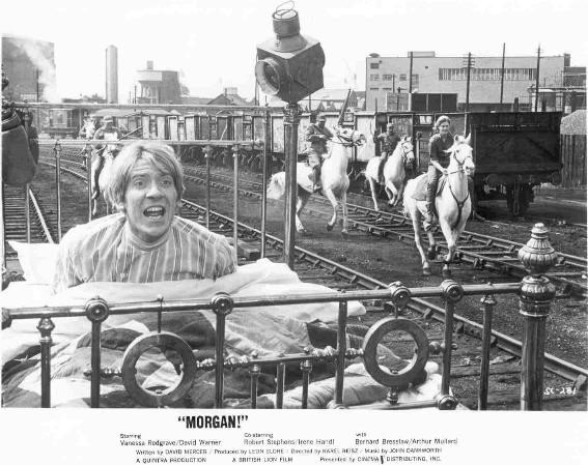 Whilst the film is full of excellent dialogue, memorable performances (particularly from Warner and Handl) and is certainly very funny in places, it is the underlying theme of Morgan's state of mind ("D'you know, I believe my mental condition's extremely illegal!") that runs throughout the film, and then dominates the final scenes as fantasy takes over from reality.  He has already referred to straitjackets to his mother, and revealed that he has visited a psychiatrist (who was apparently the one who decreed him to be a 'suitable case for treatment') and as he lies in a scrapyard, still in his gorilla costume, these worrying images take over, as seen here: 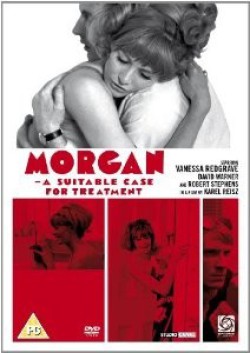 My DVD copy, which I've had for years, is rather poor quality, but I see there is a new release from 2011 out, available for about £10 from the usual sources, and I found a very good review of the film and specifically the DVD here, just copy and paste this link into your browser:

The whole film doesn't seem to be on youtube; although Morgan is not quite an unsung film, it certainly doesn't seem to get shown very often, and that's a shame because in certain respects it's a key film of the mid-Sixties.