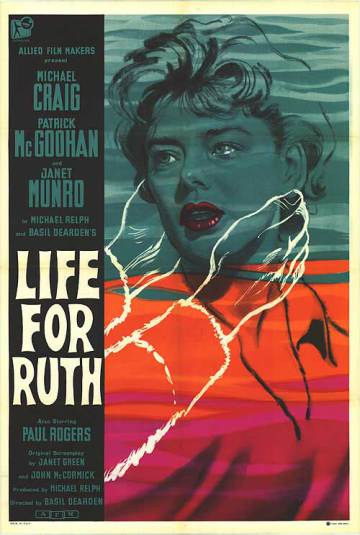 When I first started this website I remember writing that I was going to have a lot more to say about Basil Dearden and Michael Relph, but 2 and a half years later I've not got round to it - until now.   I'll be shortly writing about The Ship that Died of Shame, and the next home page should be on the redoutable director-producer duo, but first up is -  surprisingly, as it wasn't planned - Life for Ruth (1962).

This is a very unusual and compelling film, with an original script by Janet Green and John McCormick, focusing not so much on a 'social problem', as Dearden and Relph's previous films such as Victim and Sapphire did, but this time on an ethical problem - the life of a child over religious beliefs.  Michael Craig and Janet Munro play Mr and Mrs Average (John and Pat Harris), who live in County Durham (the film was mainly shot in Seaham, and in fact I have recently, in May 2019, visited there and taken some 'now' shots for the reelstsreets website, see here:  https://www.reelstreets.com/films/life-for-ruth/) with their 8 year old daughter, Ruth.  Tragedy strikes when Ruth and the next door neighbour's son, Teddy, get into trouble in the nearby sea, and Harris dives into the water to save them.  He saves Teddy first, but by the time he rescues Ruth she has lost a lot of blood, which is the core of the issue, as we see in this scene, with Patrick McGoohan playing Doctor Brown: 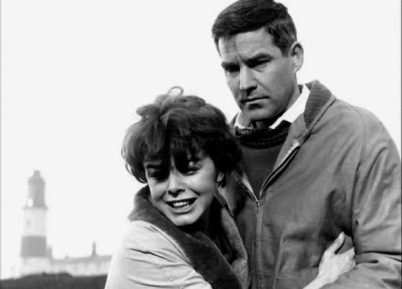 I thought at this point that the rest of the film was going to be in 'real time' as they decide whether to let Ruth die or not, but in fact the die is cast and, although Pat Harris returns to the hospital to beg Brown to go ahead with the transfusion, there is nothing he can do against Harris' wishes, and Ruth dies.  At this point the issues seem to be clear cut, and easy to lay the blame at Harris' door, but this is a film with a lot of difficult questions and no easy answers.  Brown, against the wishes of his employers and the police, decides to pursue a private prosecution against Harris for murder, which is later reduced to manslaughter, whilst Harris' in-laws take against him - his father-in-law striking him in anger and despair - along with the local community. 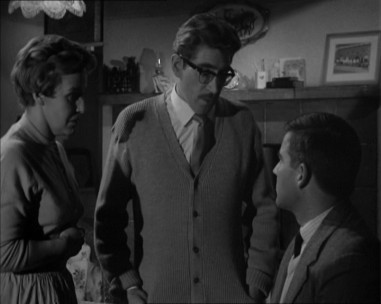 As Brown doggedly pursues his action against Harris, I started to change my perspective of the character, as his prosecution starts to look less like a moral crusade and more like a vendetta against a vulnerable man. I was pleased to note that Robert Murphy makes the same point (after I watched the film of course) in 'Sixties British Cinema', writing that Harris is "a man of deep emotions and deep convictions", whilst Brown is "callow and arrogant."  Many of the minor characters have the key lines, for example a police Inspector says that "Religion is a tricky business, very tricky - everybody feels, nobody thinks" whilst a hospital manager points out that "It's their beliefs, and it's no good having a set of beliefs if you're going to throw away the inconvenient ones".  The Harrises' next door neighbours are one of the few people that support Harris, although even then when the husband (Frank Finlay, above) says of Harris "He's a good man" his wife replies "Are you sure that we'd think that if he hadn't saved Teddy's life?" to which he has no answer and the question hangs poignantly in the air. 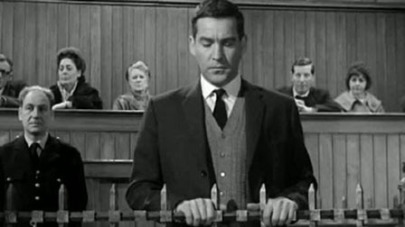 With huge local and national interest, with even the police officer who arrests Harris knowing him since school, the case proceeds to court and the film ends as a courtroom drama, although somehow the outcome seems less important than the impact the whole tragedy has had on the couple, with Pat having gone back to Harris after forgiving him.  With the facts of the case not in dispute, the defence decide to not bother with all the character witnesses they had lined up and rely instead totally on Harris himself: 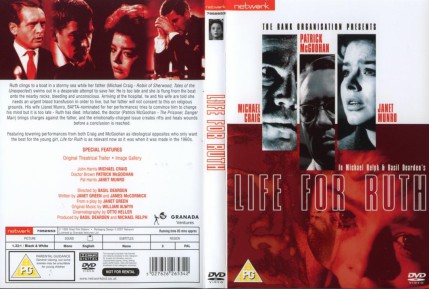 The whole feel of the film reminds me very much of Ingmar Bergman in its depiction of a bleak, cold, austere world.  Apparently it was not a box office success, and after another strange film, The Mind Benders, Dearden and Relph moved on to more transatlantic big budget productions.  Very rarely shown on TV, it's available on DVD for about £9-10, and stays in the memory for some time after viewing;  an excellent example of the variety of British film-making at the time.