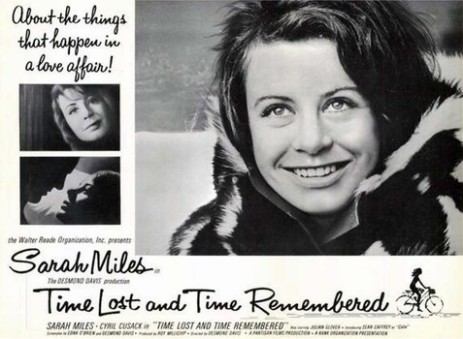 I was happy here, also known as Time Lost and Time Remembered, is a lyrical and wistful film about lost love and memory, entirely out of keeping with the increasingly frenetic world of mid-Sixties British film making which was beginning to retreat back to media images of London after its all-too-brief excursion into the forgotten lands of Northern realism. The director, Desmond Davis, had directed his first British film a year earlier with The Girl with Green Eyes, based on Edna O'Brien's novel, which has vaguely the same milieu as this film, but then went on to direct Smashing Time, reuniting the stars of The Girl with Green Eyes (Rita Tushingham and Lynn Redgrave), which is back in Swinging London, albeit as a cynical pastiche of that world.

Sarah Miles, in between The Servant and Blowup, stars as Cass Langdon, who returns to her home village in the west of Ireland in winter and is staying in the closed hotel run by Hogan (Cyril Cusack) where she used to work.  The film takes place in 'real time' over the course of one evening, but there are lots of flashbacks from the varying perspectives of the main characters.  In this scene, near the start of the film, Cass wanders through the deserted streets and recalls her first true love, Colin (Sean Caffrey):

As can be seen from the clip above, one of the features of the film is its location and scenery.  The credits show that it was partly filmed in County Clare, but I had to do a bit of digging about to find out where exactly.  I came across a blog by Mike O'Sullivan called 'Mike Movie Projector' [http://osullivan60.blogspot.co.uk/2010/06/i-was-happy-here-again.html] which identifies the locations as Liscannor and Lahinch, and so here are some shots of these two places which appear to be identifiable from the film. 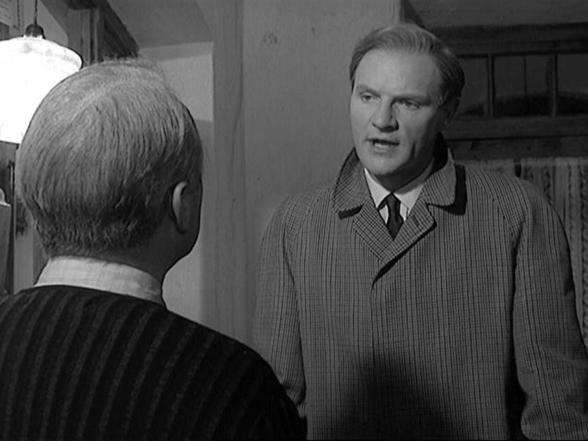 Cass' husband DOCTOR (musn't forget his grand title) Matthew Langdon turns up, looking for Cass.  It is immediately obvious that he's a grade A tosser, rude, overbearing and obnoxious, and it's hard to work out how Cass ended up with such a dislikeable arse.  Hogan is the very soul of calm and stillness in the face of Langdon's posturing, and Langdon, once he is convinced that Cass is not hiding in the hotel, explains how matters came to a head on Christmas Day (which I take to be the day before, maybe two days before). 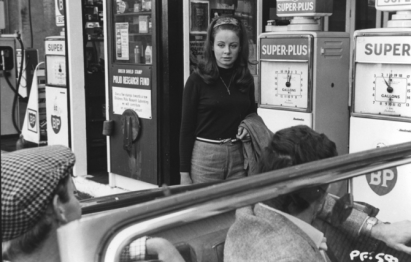 Flashbacks now alternate with real time, as we see how Cass moved to London, working at a petrol station, only to find that Colin has had second thoughts and has decided not to move to London to be with her.  A chance encounter then with Langdon (right) leads to her becoming involved with him, but it is obvious to us the audience, and to Cass as well in her reflective moments, that he is just using her as would what be now called a 'trophy girlfriend' to parade in front of his boorish rugger mates, and so that he can stick her in front of his new doctor's practice in Wimbledon as a receptionist, again as a kind of adornment.

We then see, from Cass' perspective, how she came to be married and to become pregnant:

Throughout the film the scenery and settings of western Ireland and Cass' home there are depicted as warm, vibrant, and fresh and are frequently contrasted with the shabbiness and anomie of London life; one scene, just after she has been jilted by Colin, finds Cass sat in a soulless cafeteira where the sign above the machine states 'Feed the Machine and it will feed you'.  Cass even finds a moment of pleasure in 'borrowing' a bicycle to ride around in circles for a few moments, in a poor simulation of her carefree cycling along the beach near her home on her way to see Colin. 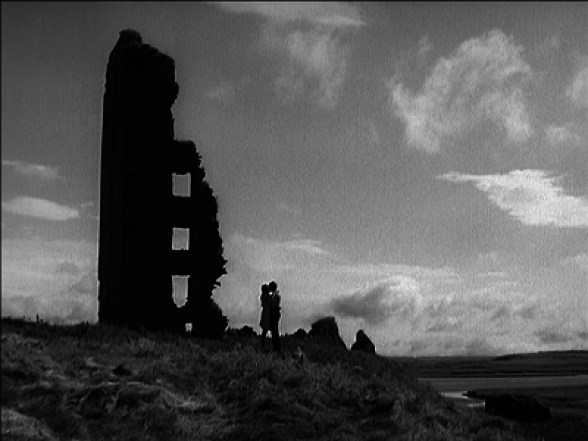 Colin himself has not just sat and waited for Cass to come back, and has in fact only just returned from working on oil tankers in the Gulf and elsewhere (he specifically mentions Kuwait at one point) and is now planning on settling down with Kate, his fiancee, and returning to fishing for a living.  Indeed it is not quite clear what either want or hope to get out of this rendezvous, but they are given little time to talk it through with Langdon tracking Cass down.  The final confrontation between Cass and Langdon provides no easy answers, but there is a telling rebuke at one point when Langdon mentions that he met Colin's fiancee, adding "She seems a nice girl" to which Cass replies bitterly "Oh, yes, we're all nice girls". 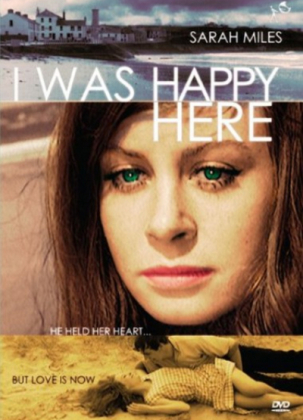 I never give away the endings to any of the films in the 'Unsung films' section, but in keeping with the rest of the film suffice to say that the future for all the protagonists remains uncertain, as one might expect.

This is adapted from Edna O'Brien's short story 'A woman by the seaside', which I haven't read yet but hope to get hold of soon (come on Norfolk libraries, I'm counting on you!).  It must have been released on DVD at some point, as a number of websites have it for sale, but it mainly seems to be for sale in the US on region 1 format.  I got my copy from myrarefilms.co.uk, and it's not bad quality at all (the clips above come from this disc), this site is highly recommended as the guy who runs it has other such films and it's always worth asking if you don't see what you're looking for on the site.

More akin to European art cinema than a mid-60s British film (although some would be quick to point that in its antecedents and its location it is not British anyway, which I would accept) this film's melancholic tones haunt the memory.  A sad, beautiful film.