This piece was written in 2012 and I have decided not to update it but let it stand as it is.

My piece on the film club in Abu Dhabi got me thinking about which films I would have shown, had I run a film club on 21st century British films, so I've drawn up a list of 10 British films of the last 11 years or so that I think will stand the test of time.  It is not representative of films this century - I simply haven't seen enough new films for it to be that - and it is certainly not the most popular, mainly because I haven't seen the most popular (still not seen The King's Speech, only seen the first two Harry Potter films, and can't stand James Bond).

As I thought of 10 films, trying to cover the variety of Brit films, it was very noticeable that so many reflect or portray the past, very specifically in the case of Control or Made in Dagenham. They say we live in the past, maybe these films are evidence of that. They're in alphabetical order rather than in order of merit.  Hope to hear others' views on what should or shouldn't be included. 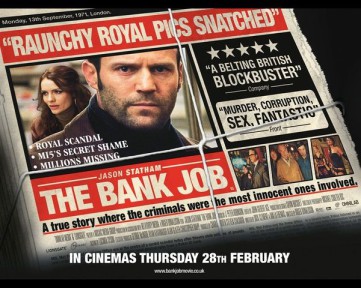 Oh God, not another Brit crime flick with dodgy geezers, duckers and divers, bent cops and 'snouts', and set in the 70s? Yawwwwwn...

But there's much much more to The Bank Job than at first meets the eye. For a start, Ray Winstone isn't in it, and much as I love 'the Daddy' I think there was a law that said he had to be in any British crime film and it was getting tedious.  Also, the plot means that there's a political angle to the whole set up which (whilst possibly completely fictitious) means the film goes off at a rather different angle rather than the usual 'bank job goes wrong, they all fall out with each other, crime doesn't pay' line.

Not so sure about the pat ending (all the corrupt coppers are found out) but with Jason Statham and the likes of Daniel Mays involved (not to mention the script by old stalwarts Dick Clement and Ian La frenais - oh, I just did) this is something a bit different in the Brit crime canon. 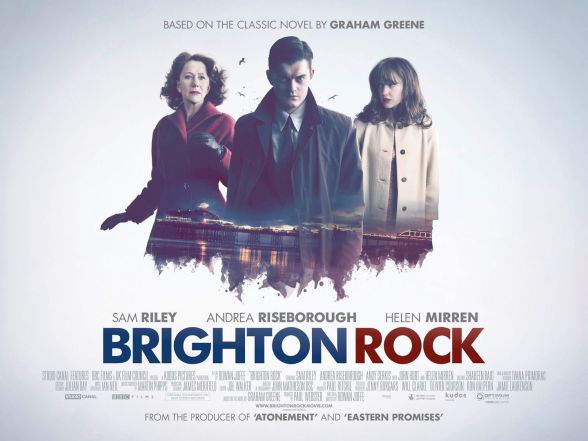 The long-awaited 21st century take on Greene's famous novel did not disappoint, although it had a lot to live up to.  For me, the updating of the novel to the 60s Mod era worked very well, although one or two scenes were inevitably going to draw comparisons with Quadrophenia, and Sam Riley was excellent as Pinkie, although I still prefer Attenborough's definitive performance.  My main quibble with the film was that Pinkie is shown as growing into the role of the gang leader, and lacks the authority which Pinkie must have (as he had in the book and 1947 version) for the plot to work. However I think Andrea Riseborough's performance as Rose is better than Carol Marsh's in the original, and she has indeed gone on to become a major actress.  Surprisingly, the film went with the 1947 film ending rather than the book ending, but it works beautifully.  I've now compared this film with its 1947 predecessor and the Greene book, see here. 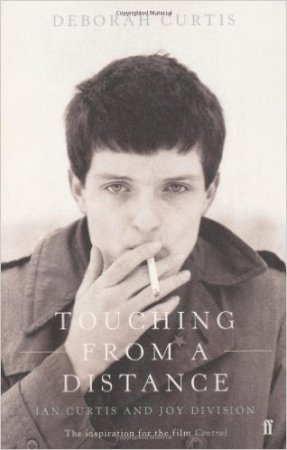 Riley got his big break playing Ian Curtis in arguably the best British film of the decade. Although it was playing to Joy Division fans, it works best as a biopic of Curtis the man; it was based on Deborah Curtis' memoir Touching from a Distance, and overall Curtis comes across as a selfish individual, particularly in his relationship with his daughter.

No sentimental rose-tinted view this; director Anton Corbijn, who used to be a photographer with the NME and therefore knew the band, examines Curtis with painful remorselessness, whilst the scenes of the band performing are magnificent (the actors played the instruments themselves, rather than have the original music dubbed over). Whilst the arguments continue over how accurate it really is, there is no denying the power of the direction, the cinematography or the acting.  Unmissable. 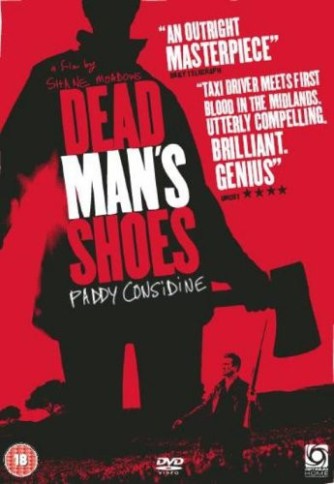 I went to a class on post-war British cinema at the UEA in Norwich a few years back, and the tutor, Martin Devenney (who was excellent, thanks Martin) was a fan of Shane Meadows.  I have to admit I hadn't heard of him at that point, but encouraged by Martin, who regarded Meadows as the great hope of Brit cinema, I got to see most if not all of his feature films since then.  This is England remains his most famous film, but Dead Man's Shoes - a revenge tragedy reminiscent of many a Western -  reminded me inexorably of Taxi Driver, with Paddy Considine playing De Niro to Meadows' Scorsese.  It hasn't quite turned out like that (not least because neither wanted that I suspect), and despite This is England and greater recognition I still think this is Meadows' best film.  Considine recently became a director with Tyrannosaur, which I still haven't seen yet (memo to self - must watch).  One of my favourite scenes is where Considine confronts one of the 'gangsters', although I'm not convinced that gangsters would drive around in a green and white 2CV... 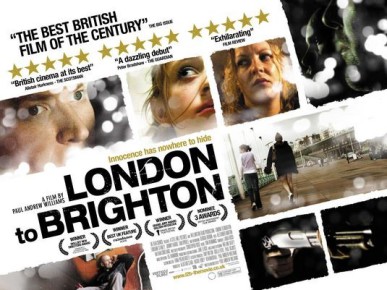 It would be wrong to assume that all British films look back on a sanitised past, relying on impeccable acting in historical period settings. Here was as gritty and authentic a picture of modern Britain as one could want (or not want, as the case may be) to see.  Unflinching in its portrayal of an immoral and corrupt society, this is British realism at its seedy best.  Its tale of child prostitution and the violence of those that profit from it is compelling viewing, and bears comparison with its predecessors (Mona Lisa, for one).  Yet, somehow, there is redemption and the hope of a future for the protagonists, despite all that they have been through. 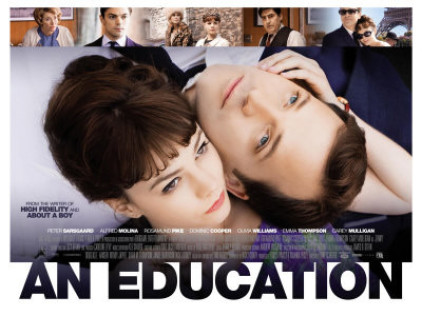 Straightforward 'retro' film, set in 1961, telling the tale (adapted by Nick Hornby from Lynn Barber's memoir) of how a middle-class girl gets corrupted by a con man, but it all turns out all right in the end.  Carey Mulligan, the new darling of British film, is terrific, although I did find her character incredibly annoying (was she really that naive?).  All very British, with historical period detail spot on (although wikipedia suggests there are a few errors), usual high quality acting, and at the end of it all a fairly ordinary tale. Its sheer quality sees it through. 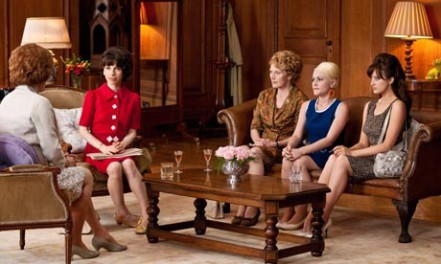 A story - the fight for equal pay rights for women in the late 1960s - that deserved to be better known.  The usual liberties are taken with the story, and the character of Rita O'Grady is a composite of a number of characters and didn't exist, but the main element is truthful.  Sally Hawkins is terrific as always as the ordinary woman who takes on the powers-that-be, and she is ably supported by the likes of Daniel Mays, Miranda Richardson, Bob Hoskins - and there's even a Winstone in it! (Jaime, daughter of Ray).  I first saw Hawkins when she played Ella in Patrick Hamilton's 20,000 Streets Under the Sky.  She was quite brilliant I thought and I have tried to watch her in as many things as possible since.

Now how about a drama on the Grunwick disupte of 76-78, led by Jayaben Desai on behalf of a largely female, East Asian workforce? 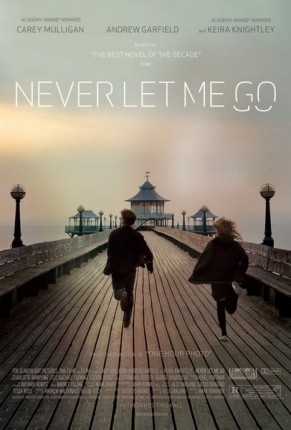 As a long time admirer of Kazuo Ishiguro - I still think 'The Remains of the Day' is one of the great novels of the 20th century - I was looking forward to the film adaptation of his chilling novel on organ donors and cloning set in a kind of parallel world, and was not disappointed.  The film is as chilling and haunting as the book.

Carey Mulligan (again), Keira Knightley and Andrew Garfield (last seen by me in the incredibly bleak and depressing Red Riding Trilogy on TV) play the three main characters, all of whom come to realise that their function in life is to donate their organs before an early death.  Quiet and understated, and ultimately very touching and affecting. 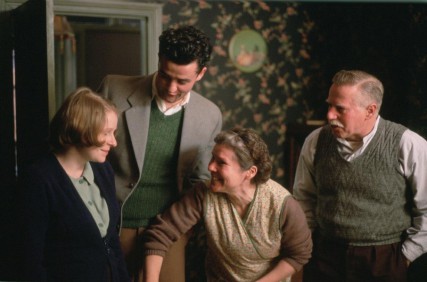 Another film set in the post-war period which seems so beloved of British cinema, this Mike Leigh production tells the story of an ordinary woman with an extraordinary secret.  The cast is just about unbeatable - Imelda Staunton, Phil Davis, Daniel Mays, Eddie Marsan, Ruth Sheen, Sally Hawkins, Lesley Manville and even one of my own favourites, Tilly Vosburgh, in a minor role - this is another classic Brit film which holds the attention through the sheer strength of its story and acting.  It all seems so easy, but as I'm sure Mike Leigh would acknowledge, it is when you have quality performers like this to work with. 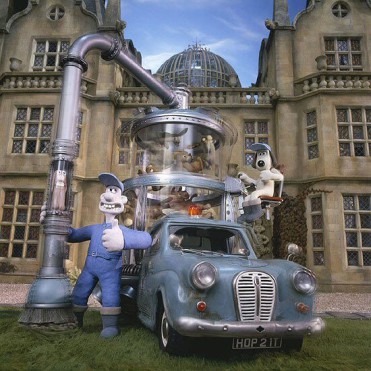 I got the first 9 films done, and then thought - right, what shall I have for no 10? Pierrepoint? (no, too similar to Vera Drake).  What about another crime film like Going Off Big Time? (no, done that).  Or Billy Elliott?  Or Gosford Park or Pretty Young Things? (no, again, more historical films).

The Curse of the Were-Rabbit is just a joy from start to finish, and is a pretty good way to end this list.  It's funny (of course), it's exciting, it's a bit scary (well I got a bit scared anyway) and the attention to detail, and the comic timing, is immaculate.  If you don't like this you don't like cinema.

Big thanks to LsneJ for his/her excellently done youtube clip which s/he put togehter, which follows: