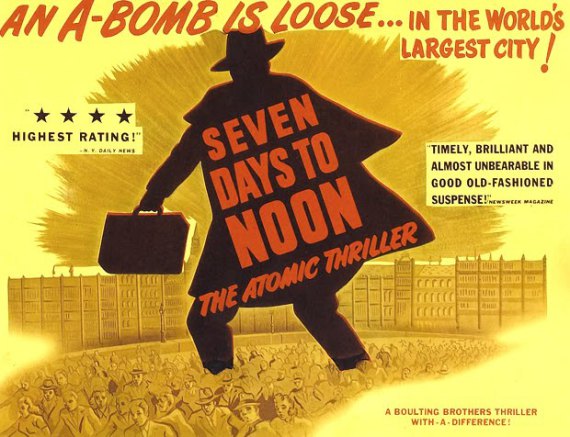 Seven Days to Noon is a tense thriller made by the Boulting brothers John and Roy, who jointly wrote, directed and indeed edited the production, following on from their late 40s films such as Brighton Rock and Fame is the Spur.  A highly topical film, given that Britain was still two years away from testing its own nuclear deterrent, it opens with a letter addressed to the Prime Minister being handed over to Special Branch at Scotland Yard, and in particular Superintendent Folland (Andre Morell).  What I particularly like about this scene is that Folland asks his assistant Davis (Russell Waters) for 'the Wallingford file' relating to the research laboratory there; in reality, this would take a few hours, with the officers having to put in a requisition order, signed in triplicate no doubt,  waiting for staff to find it, (after realising that it wasn't where it was supposed to be) and then finally having it brought over from the archive on the other side of London.  However, as luck would have it, it seems to be the only file in a very small safe in the same room which seems to be open anyway: 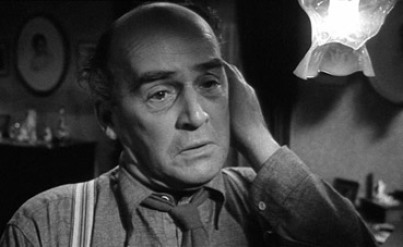 Folland's investigation leads him firstly to Wallingford, where he meets Willingdon's assistant Stephen Lane (Hugh Cross, not an actor I know) and then onto the Professor's wife (who appears in only one brief scene, and strangely plays no further part in the film) and daughter, Ann (Sheila Manahan, again not someone I'm familiar with) but gives away as little as possible, although he does let Lane in on the fact that Willingdon has taken a component that will allow him to set off a small-scale nuclear explosion, and is trying to hold the British government to ransom by threatning to cause an explostion in central London at noon on Sunday (which, you may be surprised to hear, is seven days away) unless the government stops its nuclear programme.

Folland meets up with a local vicar, the last person to speak to Wallingford before he did a bunk, and learns that Wallingford's mind is disturbed due to increasing doubts over the morality of his work - we heard something similar from J Robert Oppenheimer after the Trinity test, and bear in mind that the first atomic bomb had been dropped on Hiroshima less than five years earlier - which makes Folland realise the real danger and urgency of the situation. With the Cabinet and the Prime Minister (Ronald Adam) briefed, and the army called in (inclulding an uncredited Bruce Seton) the hunt is on, and as Folland and Lane look over London, Folland remarks "Well, there's your haystack Lane - and believe me it's a damn small needle we're looking for".

We are nearly 25 minutes into a 90 minute film, and the main character has not yet been seen, other than in 'Missing' posters, but this scene opens with his first appearance as he looks to hide out for the week, look out for Joan Hickson with a fag constantly in her mouth, as well as Ernest Clark:

Willingdon is almost caught by accident, as Mrs Peckett, suspecting that the suspicious Willingdon might be the 'landlady killer' in the newspaper headlines, gets the police round, but Willingdon manages to spot them on his way back home and goes on the run again.  Attempting to buy a new overcoat - he gets rid of his own, as it is part of the description of him in all the papers - he meets up with Goldie Phillips (played by the veteran Olive Sloane, in her best-remembered film role), a faded 'good time' girl, replete with fox furs and a King Charles spaniel called, inevitably, Trixie.  Rather implausibly Willingdon meets up with her again in the evening, and she generously allows him to buy her a drink in a nearby bar, where a short scene provides Geoffrey Keen with a cameo as a barfly ranting about bombing the Russians.

The script and Sloane's performance makes it fairly obviouis that Mrs Philiips is not averse to supplementing her meagre income with a bit of casual prostitution, and perhaps this is what she has in mind when offering to put the Professor up for the night, but she makes her money anyway when he is up and gone in the morning long before her, leaving her a note and two £1 notes. 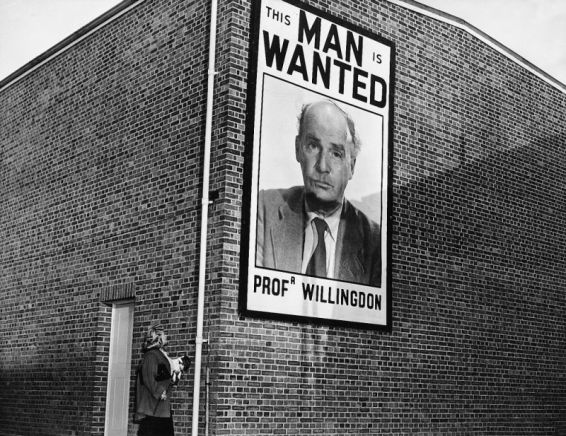 On Thursday the Prime Minister decides to come clean and inform the public what is happening - the ill-informed rumours have been spreading anyway - and an evacuation programme is put into play, wtih Goldie deciding not to wait for an official evacuation but to head off to Aldershot ("to entertain the troops", as she explains to a neighbour).  However, with all the posters (see above) plastered all over the city, the Prof has to ride out the next few days, and decides to end up back with Mrs Phillips as the safest place to hole up.  Central London is evacuated, so that by Friday the troops are ready to move in on their target: 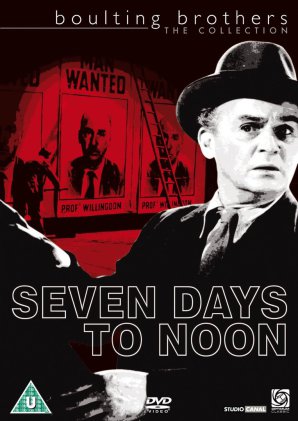 Sam Kydd was seen in that clip, like Bruce Seton uncredited, and Victor Maddern also appears as a trigger-happy soldier who you just know is going to figure in the denouement in some way, although I must admit I missed Joss Ackland, who appears as a police Sgt in one scene according to wikipedia.

There is really only going to be one ending, but the film retains its taut and tense atmosphere to the end, although strangely Davis, who provided some comic relief with the urbane Morell at the start, completely disappears from the film after the first few scenes.  The film remains particularly memorable for the scenes of an evacuated London, in shots reminiscent of the American TV series 'Life after People'.

The DVD is quite expensive to buy as a single DVD - about £10 on websites like pay.com - but I suspect you can get it as part of a box set or a collection if you hunt around. A very entertaining thriller.