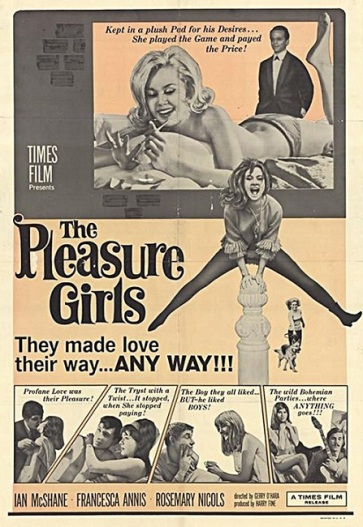 The Pleasure Girls, with its suggestive title (google that and see what it throws up!) is clearly marketed as a vaguely exploitative film, although I am not quite sure what niche in the market it was aimed at, but the producers - Michael Klinger and Tony Tenser - had a background in such films.  What is interesting now, reading blogs and suchlike on the internet, is that although Gerry O'Hara gets the writing and directing credit, most of the film was directed by Clive Donner (Some People, Nothing but the Best, later to go on to Here We Go Round the Mulberry Bush) who objected to Klinger and Tenser 'sexing the film up' and left the project.  See this interview with Anneke Wills for details from her memory of the making of the film:  http://www.cathoderaytube.co.uk/2010/05/british-cult-classics-pleasure-girls.html

Starring Francesca Annis, Ian McShane and 'guest starring' (how can you have a guest star in a one-off film?) Klaus Kinski, this is the story, over one weekend, (the film opens on a Friday and ends Monday morning) of some young men and women (some maybe not so young) and their problems and issues, centering on sex and relationships. The trailer below, as so often with these pretty awful things, completely fails to capture the tone and theme of the film, but it's well worth watching for some of the terrible lines (I don't think you can beat "A young photographer - looking for a quick development!")﻿

The film follows Sally Feathers (Francesca Annis) leaving her upper middle class home in East Grinstead to start modelling school in London, and sharing a top floor flat with an old school friend, Angela (Anneke Wills) and Marion (Rosemary Nichols), with others in the flats below including Dee (Suzanna Leigh), Dee's brother Paddy (Tony Tanner) and Cobber (Coleen Fitzpatrick).  This clip below introduces most of the main characters in one foul swoop - it;s just crazy!:

At the party that night Keith (Ian McShane), an aspiring photographer, makes an early move on Sally, and despite his reputation for loving 'em and leaving 'em,  she stays with him most of the evening and night, walkng home at dawn but resisting his entreaties for coming in for coffee.  We meet most of the other key characters at the party, seeing them usually through Keith's eyes, such as Nikko (Klaus Kinski, of all people), who is a married man in a relationship with Dee, and Prinny (Mark Eden), likewise with Marion.  Using Keith to introduce these characters, and give brief portraits of them, is a useful narrative device which also handily skews our view of them; Nikko, we hear, is a slum landlord (clearly based on Peter Rachman, who had died only three years before the film came out, and whose unsavoury activities were mainly revealed after his death) with Dee, in Keith's view, a gold digger only hanging around Nikko for the money and jewellry. 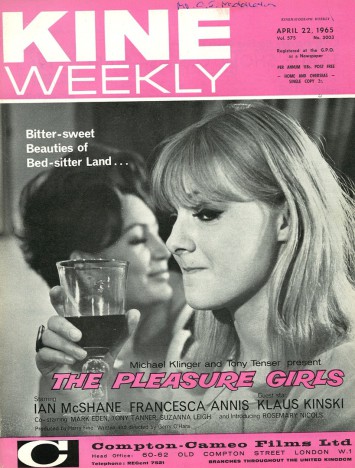 One thing that always interests me, particularly as I research these films for the website, is the amount of publicity material that doesn't actually feature in the film itself.  For example, in the case of The Pleasure Girls, the start of the trailer above, the poster at the top of the page and the alternative DVD cover all feature Francesca Annis leaping over a rather phallic bollard - which does not happen at any point in the actual film!

Equally, the shot (below) that is often used for the film again does not feature anywhere in the finished movie and again features Cobber (on the left), who is hardly in the film, in contrast to characters such as Marion and Angela.  The film made the cover of Kine Weekly (left) in April 1965, this time with Anneke Wills featuring with Annis in the background. 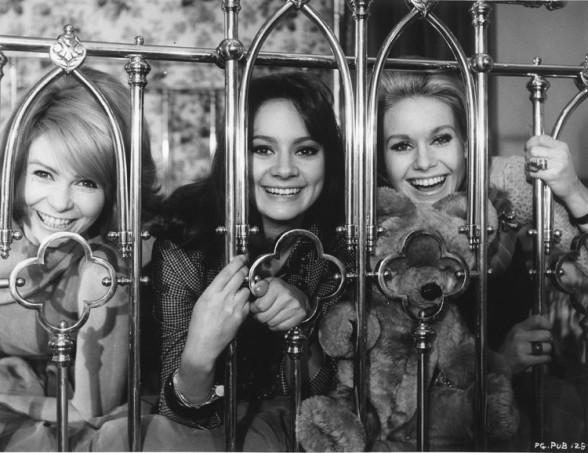 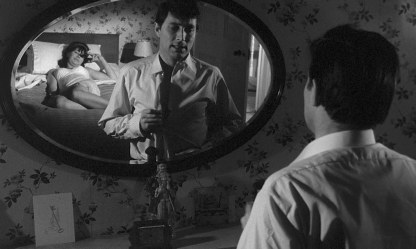 With Marion pregnant with Prinny's child, the three main plot lines are now interspersed throughout the film; Sally's romance wtih Keith, who is very keen to get her into bed as soon as possible (quite racy for the mid 60s), Nikko's business activities, which include threatening behaviour to his mainly West Indian tenants as he extracts the rent on his slums, and Marion and Prinny's musings over how to raise the money needed for an abortion (this was still two years before the Abortion Act 1967 made abortion legal).  The only item Marion has of value is the one thing she doesn't want to part with; her grandmother's brooch.  Prinny shows his nasty side though, pressurising her to part with it, but instead of taking it to a pawnbroker's on Monday morning he heads straight off to "see a man", promising to ring her later.  Look out for Carol Cleveland (who appeared in so many Monty Python sketches) in the following sequence: 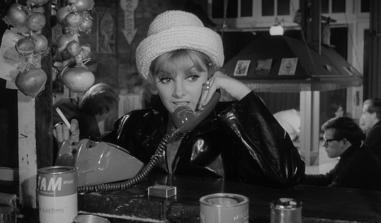 Whilst Marion finally finds the backbone to stand up to Prinny, and Sally holds out against Keith, Angela seems to drift along, blown out on one date (perhaps he took one look at her hat, right, and thought better of it) but then saddled with a character, played by Julian Holloway described only as 'Hanger-on' in the cast list, who follows her to yet another party - such decadence, darlings! - hosted by Hugh Futcher, who often has minor roles in these films.  I also just managed to catch Brian Cant, of 'Playaway' etc fame, saying goodbye to Angela in a very brief cameo in a pub.  it is Dee's story that almost ends the film though; Nikko has been threatened a couple of times before by his disgruntled tenants in the film, but has managed somehow to escape a beating, largely due to his henchman being around to assist him, but in this scene he finally gets caught out:

In one of the pieces on the net that I read the writer argued that Paddy and Ivor John Hanson), his friend, are the most relaxed couple, which I think is true, and although the fact that Paddy is gay is obvious to us - 21st century sophisticates that we are - it doesn't seem so obvious to the flatmates (and maybe not to the audience at the time? - or is that assuming too much and patronising contemporary filmgoers?) and is handled with admirable sympathy by Donner (or O'Hara maybe).  When Sally bursts in on Paddy looking for a shoulder to cry on, and finds him kissing Ivor, Paddy calls her back, telling how he went out with a woman years before but it didn't feel right and they split up. So "I came to London, I met Ivor, and everything sort of fell into place".  The film ends on an optimistic note as it looks as though things might also just fall into place for Keith and Sally, although it should be remembered that the action of the film has taken place in a little over two days so there's some way to go. 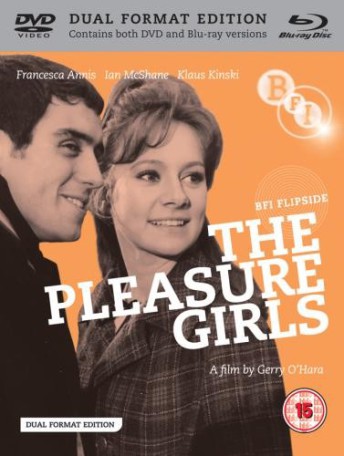 The accompanying booklet has a short essay by Sue Harper (Steve Chibnall must have been on holiday!) and a piece by director Gerry O'Hara on his memories of making the film, which apart from other snippets reveals that he hated the song that introduces the film - obviously no such thing as "director's cut" in those days...

One of the extras shows the export version that was shown in Europe and elsewhere - not much difference, apart from some nudity in one scene and a slightly more explicit violent scene when Nikko gets ambsuhed.

At the moment I don't think the whole film is available on youtube, only clips, but I may be wrong; overall this is a very overlooked film which was, until recently, almost impossible to get to see (I don't remember it ever being on TV, and it even got completely forgotten about in the BBC documentary about 60s Brit cinema).  Nevertheless I think it a much better film than Darling, for example, and it is certainly undeservedly overlooked.