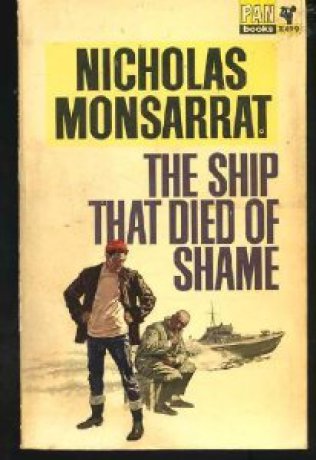 I've had a good deal to do with ships - too much, maybe - and if there's one thing I know about them, it is that they are not alive.  They are made of wood and metal, and nothing else: they don't have souls, they don't have wills of their own, they don't talk back...but I'd better start at the beginning.

The beginning, like almost everything in my life, goes back to the war.

So begins Nicholas Monsarrat's short story, and so does the Ealing Studios' production of the film, wtih George Barker playing Bill Randall, the first person narrator of the story.  Monsarrat's short story was first published in 1952, with the film version following in 1955, setting the film in 1948 (one of the newspapers in the film gives the year).

This is one of a series of otherwise unconnected films looking at the issue of post-war adjustment, identified by Brian McFarlane in an article called 'Losing the Peace:  Some British Films of Post-war Adjustment'.  Randall, along with Hopkins (Richard Attenborough) and Birdie (Bill Owen), are the leaders of the crew of MGB 1087 in the Second World War, very successfully patrolling the coast and running forays against enemy ships, inland targets and planes.  When Randall's new bride Helen (Virginia McKenna) is killed in a bombing raid, 1087 is all he has to live for.

The end of the war brings uncertainty, and Randall tries to branch out into something new (in a neat reversal of the usual scenario, he is offered his old job back but doesn't want it) but his business fails and he is bemoaning his fate, when he runs into Hopkins again.  Hopkins is doing very well for himself (Attenborough's characterisation here is quite different from his usual roles, and is a precursor to his later portrayals of successful, rather smarmy individuals in I'm all Right Jack and The League of Gentlemen).  In this scene Hopkins meets up with Randall, and persuades him to join his smuggling operation: 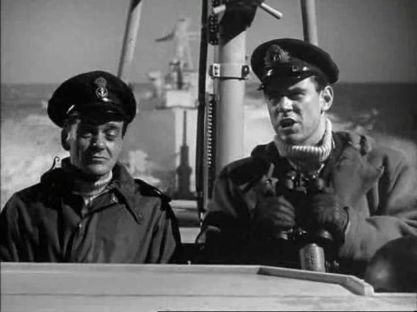 Prior to this the film had been a rather run-of-the-mill war film, of the kinds that dominated the 50s film landscape in Britain, but it now turns into somthing more interesting.   Randall is fully aware that they are getting into murkier and murkier waters (no pun intended!) but seems not to have the will power to wrench himself free (and of course the money is good).

The operations are not without their risk though, and one night they are boarded by customs officers (Bernard Lee and Harold Goodwin) but although Brewster (Lee) is suspicious, they get away with it on that occasion.   Another time they are boarded, but this time by thugs looking to take their booty off them, led by Major Fordyce (Roland Culver), whom Hopkins sees as a potential partner.

Birdie acts as Randall's conscience, but Randall tries to shut out the insistent voices in his head; when the team are offered the chance to pick up some human cargo for the first time, thanks to Fordyce, Randall knows there is not turning back, and deliberately decides not to answer any questions:

It is only the next day that they realise who their mysterious passenger was; a man called Raines, wanted for the murder of a child.  This is way beyond the pale for both Randall and Hoskins, although Randall remains convinced that Hoskins was aware.  This has been changed from the book, probably to keep some sympathy with Randall, as in the book it is clear that they are aware and indeed have already been involved in smuggling goods out of the country that were the result of an armed robbery in which one person was killed.   Here is the scene as written:

The revolting series of crimes which came to be known as the 'Raines Murders' filled the front page of all the English newspapers, and of many others, for many weeks...the facts were that Raines had recently, within the space of ten days, criminally assaulted and then strangled four children, none of them over eight years of age, and had then disappeared completely....

...Though it was dusk, I recognized Raines as soon he came aboard....When Hoskins joined me on the bridge:

"How could you?" I asked him in a frenzy of disgust.  "You must be crazy!"

"It's a job."  His voice was off hand, but I knew that he did not really fell like that about it; he realized that this was very near the last margin of evil, even for him, and the only way to endure it was to turn aside from its implications.

"He's a piece of cargo, just like anything else."

From here on in the film script goes its own way, as the short story ends with Raines and Hoskins both drowning and Randall going to prison for his part in the robbery mentioned before.  The film adds a completely new element by bringing back Bernard Lee's customs officer, who now has even more doubts about the role of MGB 1087 and its crew: 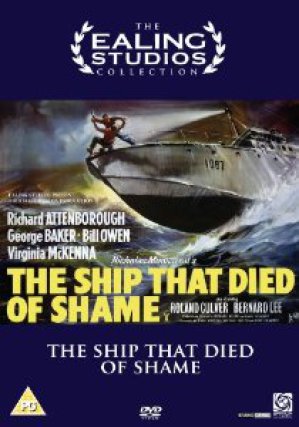 As in the story, the film plays with the idea, inherent in the title, of anthropomorphising 1087 as the crew, particularly Birdie, struggle with the mechanisms, the engine and the wheel as their operations become more and more unsavoury, as if the ship is in protest at what it's being asked to do.  The ending is rather predictable, but overall this is an unusual film which provides a good role for George Baker, who never seemed to quite live up to his promise in films of the period and was generally underused.

Made by the producer/.director team of Basil Dearden and Michael Relph, this came after a series of rather staid and stolid dramas they made for Ealing (Out of the Clouds, The Square Ring etc) and before they moved on to their renowned 'social problem# films of the late 50s/early 60s.  After the first twenty minutes or so it has a noirish feel to it, particularly in the scene with Raines as seen above, and it is certainly an antidote to the stiff-upper-lip war dramas that started to dominate from the mid-50s onwards.

I don't think it's been on TV for a while, but it's out on DVD as pictured above, and well worth buying.