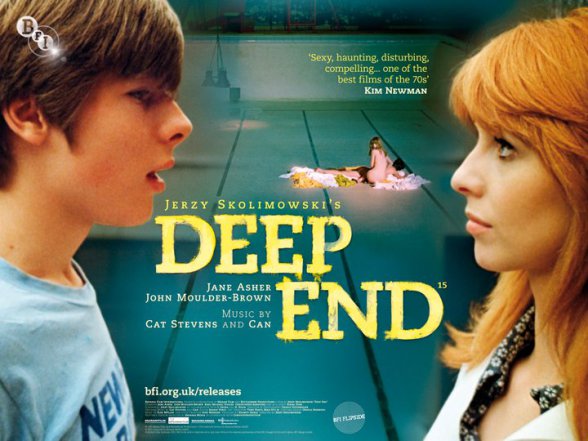 Q When is a British film not actually British?  Well, I don't really know the answer to that, but Deep End, made in 1969/1970 (depending on which source you're taking as gospel), although set in London, was actually filmed in Munich, has mainly German actors in it (apart from the two leads) and is directed by the renowned Polish director Jerzy Skolomowski.  Is it British?  It certainly is, but I couldn't tell you why exactly.

In contrast to Payroll, the previous 'Unsung film' on these pages, the film has no stars really (well, not known in the UK anyway, most are German actors!); the only actor/actress I really know in the film is Jane Asher (apart from a cameo from Diana Dors, of which more in a moment), but it has atmosphere and memorable incidents galore.

John Moulder-Brown (never seen by me before or since) plays Michael, a gauche 15 year old (Moulder-Brown was actually 17 at the time, but looks younger as he's so fresh faced) with his first job just out of school at the local swimming baths in the fictional London Borough of Newford.  He is shown the ropes by Susan (Jane Asher), a worldly-wise and sexually assured fellow worker, earning tips from some of the female customers whilst falling under the spell of Susan's charms.  The problem for Michael is that (a) Susan has a fiance and (b) she is also having an affair with the PE teacher from Michael's school, much to his disgust.  The trailer here is a little bit too long really, but I like it for The Sun's comment: "What goes on in the cubicles is enough to make Mrs Whitehouse ban carbolic soap".

Do you like football? Dribble dribble...Diana Dors gets passionate

Diana Dors' performance in the film was much remarked on; already well into her physical decline after her time as a sex symbol, she turns predator here as she tries to seduce/molest/assault Michael, all to the backdrop of George Best scoring 6 goals against Northampton...Bizarre.

It is however scenes like this that really make the film for me; one of the funniest is inside a cinema where, whilst Susan and Chris, her fiance, watch 'The Science of Sex', a painfully unerotic sex film (very much reminiscent of De Niro's Travis Bickle taking Cybil Shepherd's Betsy to something similar in Taxi Driver), Michael seduces a clearly willing Susan from the seats behind: 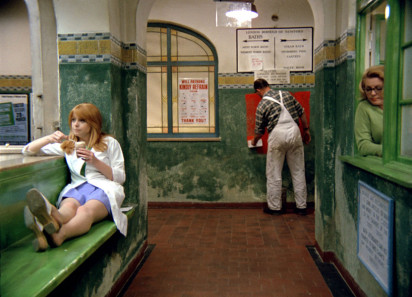 Warning: these baths can seriously damage your health

The setting is one of unredeemed grottiness; it reminds me of the old joke about somewhere being so dirty you wipe your feet on the way out.  That staple of the 70s swimming pool - the verruca - must be rampant here, and the whole setting captures perfectly a certain London shabbiness; yet strangely most of the filming took place in Munich!

An accompanying documentary on the film for its DVD release reveals that the public baths' interiors were shot at the Mullersches Volksbad in Munich, although the pool itself was too ornate and beautiful to stand in for a London pool, so the actual pool scenes were shot at the Cathall pool in Leytonstone, and there is some location shooting in Soho.  Most if not all of the crew were also German, and some of the film is clearly dubbed, indeed Skolomowski's English was pretty poor at the time in any case. Even the music is German (from the group Can, although Cat Stevens also wrote and performed one song for the film).

And yet, somehow, it all works.  Jane Asher holds the film together as the sexually liberated woman of Michael's dreams - a contrast to one of her previous roles, as a wide eyed ingenue in Alfie, ironing Michael Caine's shirts - and Moulder-Brown is very winning as the virgin who pursues her to the end. 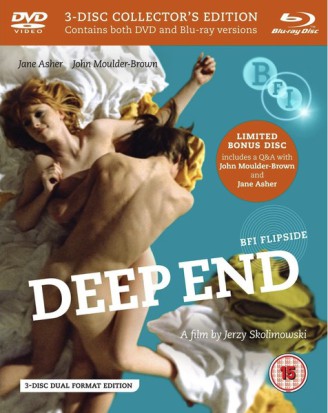 There are various clips of the film on youtube, but I can't see it in its entirety on there, but it's been released as part of the BFI Flipside series in dual format DVD and Blu-Ray, with a 1 hour 15 mins documentary on the film, plus very interesting details on some deleted (and unrecovered) scenes, and of course the series-standard informative booklet. There used to be all five parts of the 'Hollywood UK: British Cinema in the 60s' TV series on youtube, with part of it discussing Deep End, but it seems to have been pulled from the site as I can't find it now; there is a very good article on the film here (cut and paste into your browser) ; ﻿﻿﻿﻿http://sensesofcinema.com/2009/cteq/deep-end/﻿.  This article was written before the film's re-release 2-3 years ago.  Make sure however that you watch the film first before reading the booklet or watching the documentary - look out for plot spoilers!