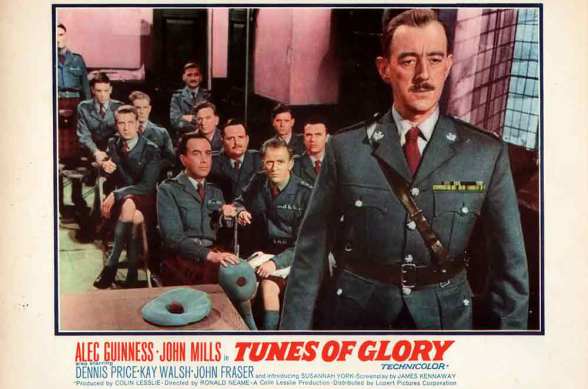 I saw Tunes of Glory many years ago, but just the other day (Feb 2018) I bought the DVD at the 4th Renown Film Festival and watched it again.  It's not my usual kind of film - I'm not into war films as a rule, or really anything to do with the military for that matter, partly because I don't understand the structure of the Army or the different ranks - but I remember the intensity of the performances of the two big hitters, John Mills and Alec Guinness, and that intensity is what still comes across. 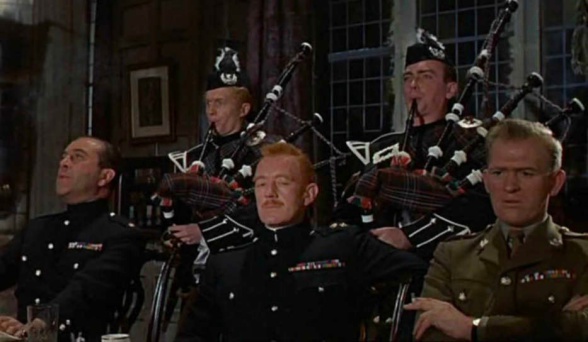 Guinness dominates the film as Major Jock Sinclair, a character who is almost a parody of a hearty, whisky-drinking, kilt-wearing, man's man Scottish soldier, who as the film opens is acting Colonel, in charge of the regiment in a wintry, isolated location (actually Stirling Castle, although some of the scenes in the town were filmed in Windsor), although he is about to be replaced by a new Colonel, due to arrive the next day.  Although the film was made in 1959, the novel on which it is based was published in 1956 and it appears to be set a couple of years or so after the Second World War.  The dinner at the start gives a quick flavour of Sinclair and how he is viewed by the men; some obviously worship him, whilst others (Allan Cuthbertson as Capt Eric Simpson, for example) visibly wince at his overbearing boorishness as he humilates junior officers such as 2nd Lieutenant MacKinnon (Peter McEnery).

There is some plot foregrounding as we are introduced to Morag (Susannah York, in one of her earliest film roles, if not her first), Sinclair's daughter, who is secretly seeing Corporal Piper Fraser (John Fraser).

The evening gets going, the pipers are called in, and the dancing starts, only to be interrupted by the unexpected arrival of the new Colonel, Colonel Barrow (John Mills), who is clearly unimpressed at the spectacle he is greeted by, and whose refusal of a whisky in favour of a lemonade hardly creates a great first impression.  Things don't get any better when Barrow does the rounds the next morning, as it becomes clear that he wants things done his way: 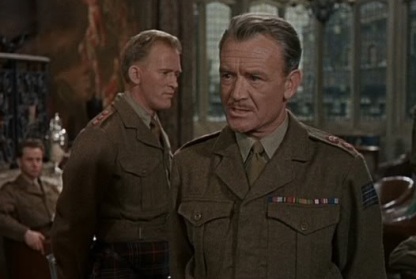 Many of the scenes now revolve around Barrow's perfectionist approach, which alienates almost everyone - the one exception possibly being Capt Jimmy Cairns, played by Gordon Jackson - as it appears that he is not going to listen to any other points of view.  One of his particular obsessions seems to be the manner of dancing, which was at its most raucous on the evening he arrived, and which he seems determined to tackle, leading to his most unpopular decision; that all officers must attend dancing lessons at 07:15 three mornings a week, made even worse by the fact that the lessons take place, somewhat to my surprise, outside in the cold (although at 07:15 in January in Scotland it would be dark, not light).

Barrow seems to be a walking tinderbox, about to explode at the slightest thing, but perhaps inevitably he completely loses it at a social event that he has set up, where the great and good from the nearest town attend for an evening of cocktails and dancing;

The real trouble comes after the event though; Sinclair, arriving home early, finds a note from Morag to say that she has gone to see a female friend, so he decides to end the evening in the pub.  Only problem is, that's exactly where Morag has gone, where she is having a quiet drink with Corporal Fraser.  The other soldiers do their best to try and distract Sinclair, but it is no use and as soon as he sees the two of them together it is his turn to lose his temper, calling Morag a 'liar' and when Fraser tries to intervene, lashing out at him and knocking him to the floor.

It might have been just another punch up in a pub on a Friday night, but unfortunately for Sinclair, Fraser was in uniform - presumably he was still technically on duty, and was ony in the pub as the dancing ended so abruptly, where he was one of the pipers - and striking another soldier in uniform is a court martial offence. 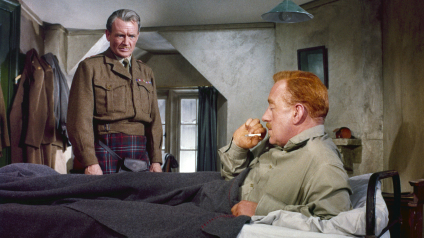 Barrow now has a real dilemma on his hands; he should pass the matter up the line to Brigade, and no doubt that is what he would normally do, but he is conscious of the fact that such action might be seen as victimising Sinclair, whom he obviously doesn't get on with, and would give Sinclair and his supporters another reason to try and undermine him in future.  If, however, he deals with the matter himself and brushes it under the carpet, it might have serious ramifications for the morale of the battalion and would expose him as someone who, despite all appearances to the contrary, hasn't got the guts to see something through.  Jimmy Cairns is all for letting the matter rest, whilst Major Scott expounds the opposing view.  In the end Barrow decides to speak to Sinclair himself, where we learn a bit more about what motivates Barrow:

Once the decision is made, Sinclair makes the most of his opportunity to undermine Barrow further, and Scott also seizes the opportunity to belittle Barrow for his weakness, leading to tragic consequences for almost all concerned... 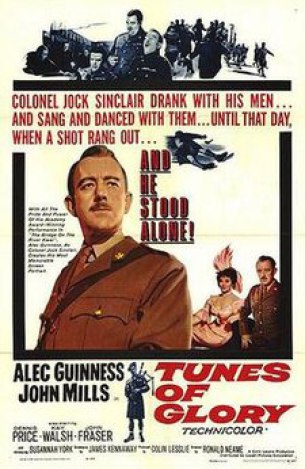 Rarely shown on TV - although I did see it got an airing on Talking Pictures TV the other day - this is a fine drama which highlights two great actors (indeed Guinness apparently always regarded it as one of his very best performances); I was very interested to read that, according to one account, each was originally earmarked to play the other's character, and a meeting was held with the two of them plus the director Ronald Neame to allocate the roles.  However Mills in his autobiography disputes this, saying he took the script to Guinness and they worked out who would play whom between them.

Watching the film again has made me want to read the book on which it was based; I was surprised to read that the author, James Kennaway, who wrote the script as well, also wrote the script of Violent Playground as well as the novel The Mind Benders and the script for the subsequent film, starring Dirk Bogarde.  He died at the age of only 40.

This powerful drama is available on DVD, I got my copy cheap at the festival but I think it can be picked up for around £10 elsewhere.