BRYAN FORBES AND RICHARD ATTENBOROUGH IN THE SIXTIES

Bryan Forbes and Richard Attenborough made some interesting and varied films together in the 1960s in one form or another, sometimes with one directing and the other producing, or with one contributing to the script whilst the other acted, and so forth.  Although overall this is really Forbes' page, I felt that Attenborough deserved some mention as although he sometimes 'only' appeared in the films, he was often involved due to his bond with Forbes and his like-minded attitude to Forbes' projects, such as The Angry Silence.  This page takes a non-exhaustive look at some of the films the two worked on in the 1960s, although one film I haven't discussed is The L-Shaped Room, written and directed by Forbes and co-produced by Attenborough, as I've now written about the film in the page on book-to-film adaptations (Sep 2013)

Seance on a Wet Afternoon 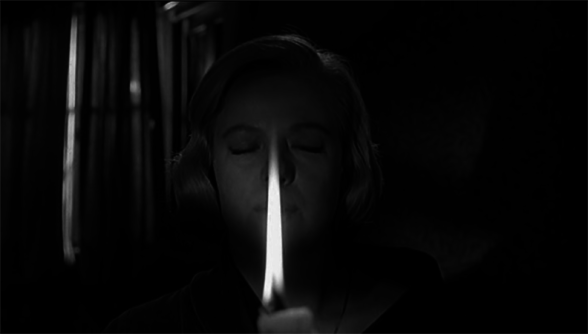 Seance on a Wet Afternoon is a 1964 film produced by Bryan Forbes and Richard Attenborough, written and directed by the former and starring the latter. It's an unusual story of a fake medium (Kim Stanley, above) who comes up with a plan to kidnap a child, so that she can reveal the child's whereabouts through her psychic powers and thereby become famous. You just know a plan like that is going to go wrong don't you?

Attenborough plays her husband who of course has to kidnap the child, and there's a role for Forbes' wife Nanette Newman as the mother of the kidnapped child. Attenborough reveals that he can play sinister characters, a skill which was to come to full, chilling fruition in 10 Rillington Place 7 years later.  In this sequence he carries out the kidnapping:

The League of Gentlemen 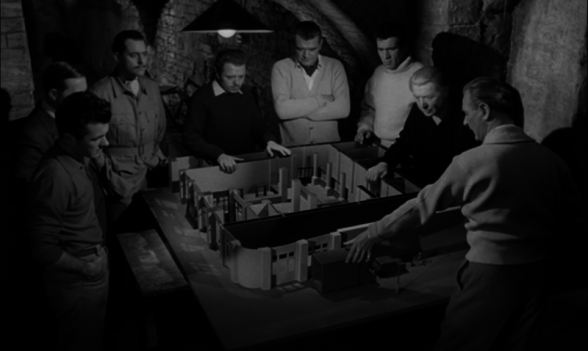 Forbes and Attenborough both appear in this celebrated crime drama with a light touch, with the script written by Forbes. You've probably seen this one before - always on telly on Channel 4 of an afternoon - and this is the scene near the start where Hawkins, having enticed all his team to luncheon at a club, demonstrates that he has the advantage over them by revealing all the details of their shady pasts: 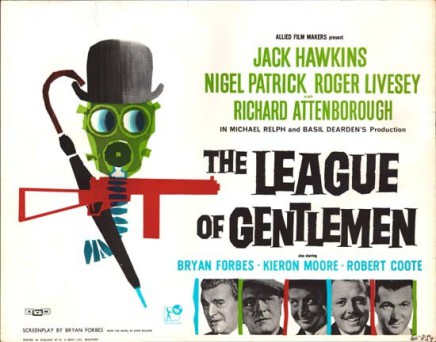 If any film just makes itself, maybe The League of Gentlemen is one such film.  With a tremendous cast all on top form and a tight, tense script, the director and producer team of Basil Dearden and Michael Relph maybe just let Hawkins & Co do their thing.  It's a shame that crime couldn't be seen to pay in those days, but I still think the ending (won't spoil it for those  who still haven't seen it) gets it just about right.

Whistle down the Wind 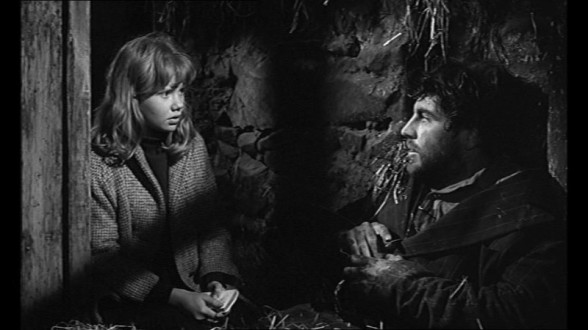 I still love Whistle down the Wind (1961), directed by Forbes with Richard Attenborough producing. It's such a gentle film, maybe not so believable now (kids are far too street-wise these days) but very moving at the end I think. The music, by Malcolm Arnold, is highly memorable, [see clip below, thanks to paul bonser for this] and the location shooting, on a bleak farm in Lancashire, is worthy of the more famous and feted New Wave films. I remember there was a very underrated series a few years ago, presented by Ben Fogle, called 'Big Screen Britain', which featured short 10 minute programmes on the locations of such films. Must check on youtube to see if you can watch them on there (just checked 31/03/13 - no.) If you've not seen this film, get it from the library or from netflix and settle down one afternoon, preferably in the winter, with the fire on and a nice cup of tea and enjoy; but have a tissue ready for the sad ending....(men of course are not allowed to get tearful so we have to pretend there's something in our eye, as I always have to do at the end of It's a Wonderful Life).﻿  This is one of the saddest scenes, as Alan Bates' 'Yes' comes too late, and Kathy never hears it:

One of the most memorable elements of the film is the score, by Malcolm Arnold, which when heard instantly recalls the film's atmosphere, thanks to James Stuart for uploading this: 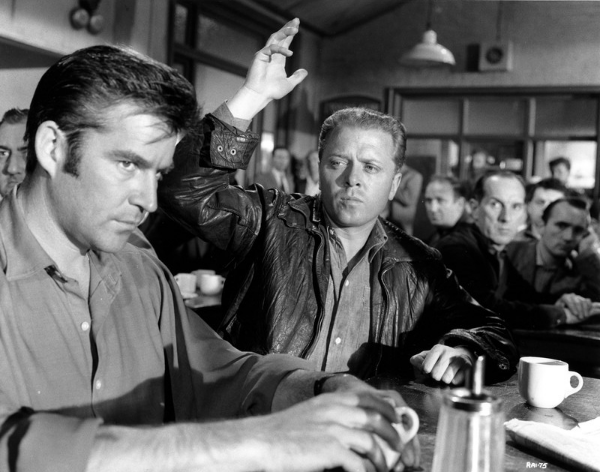 Attenborough as Tom Curtis in 'The Angry Silence', voting against the strike - Michael Craig looks disinterested

The Angry Silence (1961), which was produced by Attenborough and Forbes, with Attenborough playing the lead role and Forbes providing the screenplay, is an excellent industrial relations drama, looking at the repercussions of one man continuing to go into work after his workmates have all gone on strike; when they all return to work, he is sent to Coventry (hence the title).

Attenborough and Forbes set out to make the point that, in Forbes' own words, "everybody has the right to be different", and the characters are all complex and with their own motives. It is easy now to point at Alfred Burke's character, a communist manipulating the situation for his own ends, and laugh knowingly, but I suspect there was a lot of truth in this (my Dad worked in Portsmouth and Southampton dockyards at around this time,and he always said that there was a great deal of communist infiltration of the unions).

Regardless of one's political viewpoint on the film, Attenborugh is superb in his role, and there are similarly excellent performances from the likes of Geoffrey Keen and Bernard Lee. 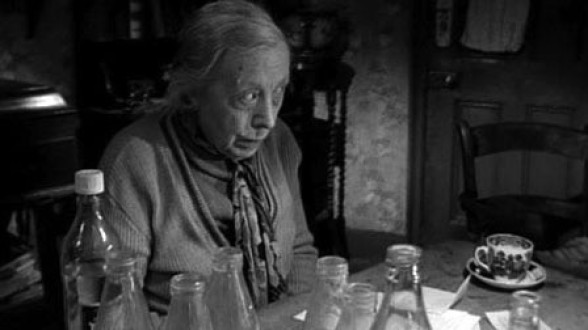 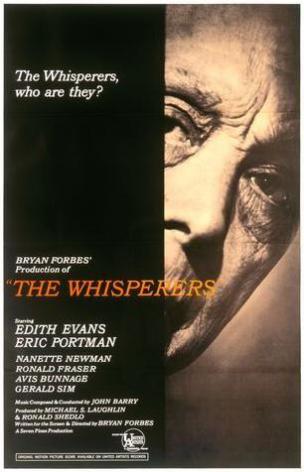 This one is pure Forbes, who wrote and directed this careful, quiet study of old age and how society provides for the elderly, but I decided to include it here although it may end up elsewhre on the website one day (an 'unsung' film maybe).  [I have now done so, in the unsung films section - Feb 2017]  It was a brave/foolhardy venture; it's hard to think of a topic that fitted less well alongside the obsession with youth and energy that existed at the time, and indeed it's a wonder it got made at all, given its lack of box office appeal.

Almost European arthouse in its style, this is a tale of an elderly woman (superbly played by Edith Evans) in a ground floor flat in Oldham (Greater Manchester anyway, despite what it says on wikipedia) who hears voices (although she's probably just hearing the couple upstairs through the pipes) and complains to the long-suffering local police to no effect. Her husband left her 20 years ago, and her son is only using her so that he can hide the haul from a robbery. When she finds the money by chance, she believes in her own mind that she has come into a fictional inheritance, but she is soon robbed of her money by a woman (Avis Bunnage) she meets by chance in the Social Security office, and the woman's husband and son dump her near her home in an incredibly callous manner.﻿

It is clear that even when her husband (a very welcome appearance by Eric Portman, one of my favourite actors) returns, life is not going to be any easier.

The whole production very much has the feel of a personal project (which might explain the lack of commercial appeal to contemporary audiences) and there are cameos from the likes of Nanette Newman (Forbes' wife, and of course mother of Emma Forbes), Leonard Rossiter, Ronald Fraser and Kenneth Griffith.

Instead here is a clip of some scenes from the first 30 minutes or so of the film, with John Barry's music accompanying the visuals, put together by utubesucks2003:

The still at the top shows 'The League of Gentlemen':  clockwise round the table, starting at the front, are Nigel Patrick, Kieron Moore, Norman Bird, Terence Alexander, Bryan Forbes, Roger Livesey and Richard Attenborough.  The empty seat at the head of the table is for Jack Hawkins, who has just left.