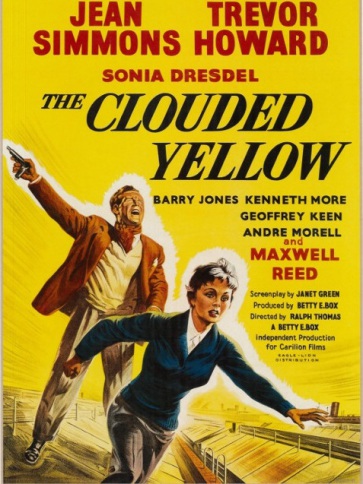 The Clouded Yellow is an excellent Hitchcock-style 'man-on-the-run' thriller starring Trevor Howard and Jean Simmons, with Geoffrey Keen, Maxwell Reed, Sonia Dresdel (?), Barry Jones, Kenneth More and Andre Morrell amongst the supporting cast.  It was directed by Ralph Thomas before he went on to make the Doctor in the House etc films, and was produced by Betty Box, one of the key players in 1950s British films.  Box was married to Peter Rogers, who directed the Carry On films, which of course were all produced by Gerald Thomas, who was the brother of Ralph.  Cosy world wasn't it?  The script (as original one as far as I can make out, from a story by Janet Green) was by Eric Ambler, who had also written the excellent The October Man, starring John Mills four years earlier.

Whilst putting this page together I found this rather attractive series of promotional posters for the film: 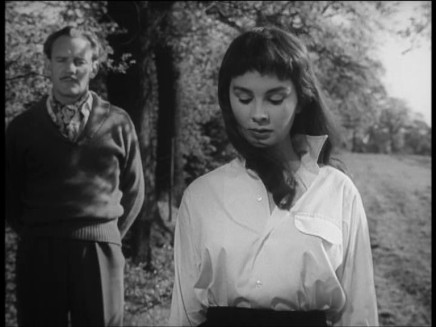 The plot is, admittedly, full of holes and implausibilities.  Howard plays David Somers, who begins the film by being sacked from the Secret Service after some misdemeanour.  "Aren't I allowed one mistake?" asks Somers.  "No" is the unequivocal reply.   He therefore has to start job hunting straight away, and as there is little about he takes on a temporary job cataloguing butterflies (hence the title of the film) for a Mr Fenton (Barry Jones) in the New Forest in Hampshire.

The Fentons have a niece, Sophie Malraux, played by Jean Simmons; she is apparently 'all muddled up' after her father's suicide when she was six, and Somers is advised to deal with her carefully.  Unsurprisingly (is there a more beautiful actress than Jean Simmons?) he falls for her completely, and takes Jess Fenton's warnings about Sophie with a pinch of salt; he is right to do so however, as Jess is having an affair with Hicks (Maxwell Reed), the cocksure and unpleasant handyman, who, despite being cruel and callous with her, clearly lusts after Sophie.  Somers first encounters Hicks through one of Hicks' cruel animal traps:

Jess is also playing psychological mind games with Sophie, reminiscent of Paul Mallen's treatment of his wife in Gaslight, deliberately creating confusion and uncertainty in her niece.  One morning however Hick is found murdered, with a knife in his back, and Sophie has a weak alibi, as the investigating officer (Geoffrey Keen) realises in this clip: 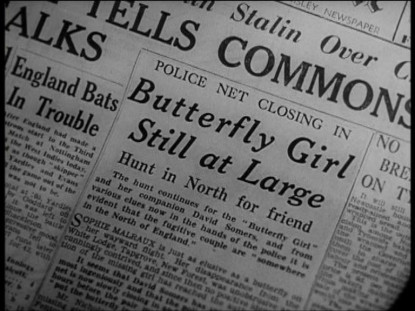 Note the story 'England Bats in Trouble' about cricket - some things never change!

What they do is go on the run.  Somers has a lot of experience and a lot of contacts and friends, so he decides to get Sophie out of the country, heading first to Newcastle, then to Liverpool via the Lake District.  Meanwhile Shipley (Kenneth More) has been put on the case to assist the police to catch Somers, to avoid unwanted publicity for the Service.

Sophie has been dubbed the Butterfly Girl by the press, as Somers uses all his contacts and know-how to obtain passports and tickets, pursued all the while, as in this noirish scene, which makes good use of the shadows - it may not be Los Angeles but at least the film crew got out of London: 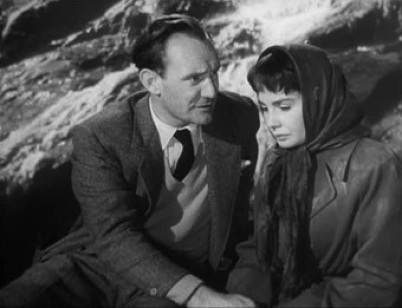 The couple make their way across the Lake District towards Liverpool and the boat they hope will take them to a safe haven, closely followed by the police, MI5 (or is it MI6? - never quite sure) and all sorts of nosey parkers and do-gooders, although Shipley contributes very little other than to privately cheer on Somers, whom he clearly admires.  In this scene Somers and Sophie continue to evade their pursuers, in a manner reminiscent of Hitchcock, particularly The 39 Steps, as Sophie's memory starts to come back: 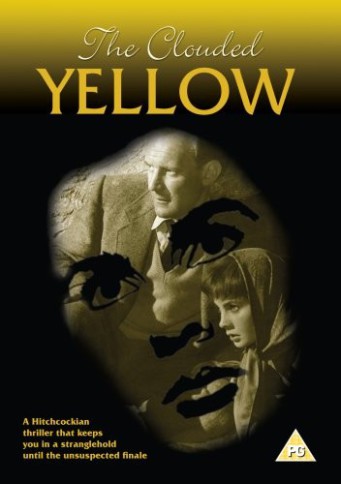 Once in Liverpool they still hope to get away, even though the forces of law and order close in, with the added bonus of an interesting scene for social historians showing the Chinese community in Liverpool in the early 50s, not to mention the rather disrespectul attitude of the local kids to the police, but there is one more twist in the story, as we find out who was really behind Sophie's father's suicide all those years ago...

The DVD can be bought for about £6.50, in what it says is 'an extended cut'' (but I wonder how much more there is compared to what I've got, might buy it to find out) and it's been put on youtube in its entirety as of Feb 2015, thanks to one Jonathan Cross.  It's also often on Channel 4 of an afternoon, perfect type of film to settle down and enjoy.

They really don't make them like this any more....