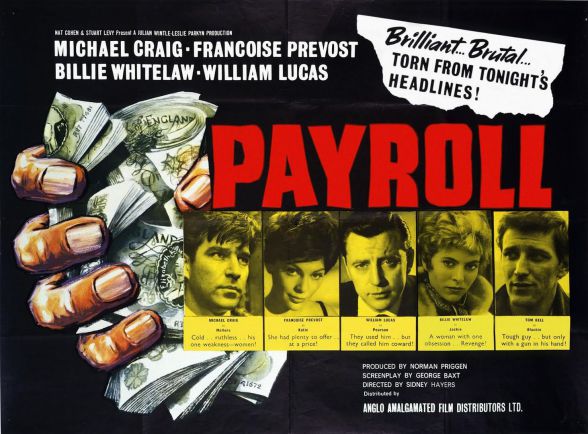 Known in the US as I Promised to Pay (no idea why, as nobody in the film does, indeed, 'promise to pay') Payroll is an excellent but somewhat overlooked 'heist' drama from 1961, set in Newcastle. I know very little - no, make that nothing - about the book, the scriptwriter or the director, but it stars several actors and actresses who normally don't get to feature quite so prominently, and they all make the most of their opportunity. Michael Craig stars (known to me more as Richard Attenborough's lodger in The Angry Silence) with Tom Bell and Kenneth Griffiths as two other members of his gang, with William Lucas, Francoise Prevost and last but definitely not least Billie Whitelaw getting some roles they can really do something with.

I remember Quentin Tarantino being interivewed just as Reservoir Dogs was being released, saying that he used to work in a video store in LA, and to liven things up used to run themed months and he ran one on 'heist' films - which was when he realised that nobody had done such a film for ages, so he decided to write one himself. The rest is history, as the saying goes. If Tarantino had been British, one of the films in his video store that month would definitely have been Payroll. 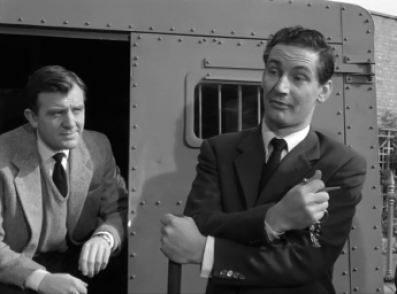 The first half of the film is very straightforward, familiar from many a film and TV series.  It opens up on someone trying to smash their way in to an armoured truck, in what turns out to be a demonstration by the firm of how impregnable their vans are.  Harry Parker (William Peacock, on the right with Glyn Houston sitting in the van) finishes off his demonstration by declaring: "Your payroll's as safe with us as it is in the bank".  Very foolish words, man... 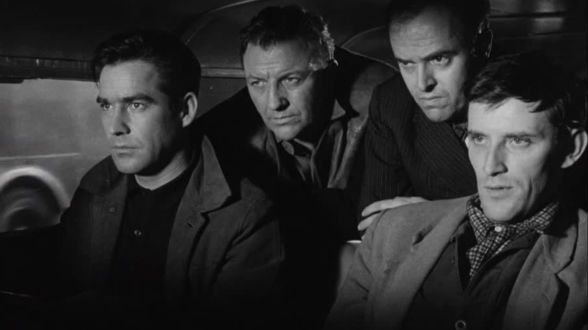 What he doesn't know is that a criminal gang have already been studying the route of the van with a view to robbing it, headed by Johnny Mellors (Michael Craig), with, from left to right above, Bert (Barry Keegan), Monty (Kenneth Griffith) and Balckie (Tom Bell), with one big asset on their side; an insider, Pearson (William Lucas) works for the company they plan to rob on the wages section. It soon become clear why he is willing to risk his job and reputation by being involved in Johnny's gang ; it's all a desperate attempt to appease his grasping and demanding wife Katie (Francoise Prevost), who clearly despises him. and is anxious for the good things in life which he can't provide.

Pearson warns Johnny off the job, given the imminent introduction of the armoured vehicle with all its additional features - steel enforced, bullet proof, police radio hook up - which Pearson summarises as "a tank on wheels".  But Johnny has planned the job for too long to give in now, as he explains to his rather reluctant team: 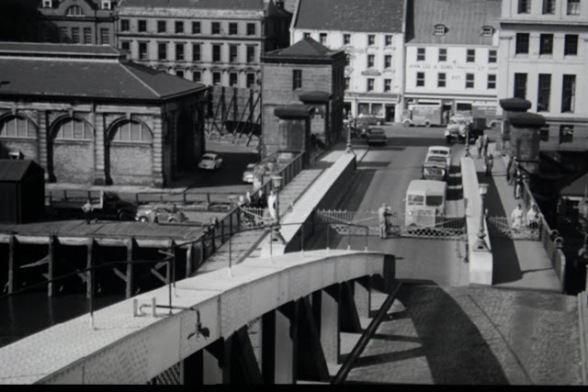 Apparently the book (by Derek Bickerton, can't get hold of it unfortunately) is set in Birmingham; here the action is moved to Newcastle (with I'm afraid the usual proviso that nobody even attempts a Geordie accent, but I suppose if Michael Caine's Carter can get away with it then what the hell) and it's a rare pleasure to see a film of this time filmed away from London (although I also think of Hell is a City, in Manchester).  Even so, some of the scenes were filmed in Rugby and also Richmond-on-Thames, but Payroll has attracted the interest of film enthusiasts in the area, as an example of celluloid history of the city.  One of the best sites is http://oldnovocastrian.blogspot.co.uk/2010/10/newcastle-in-film-payroll.html which has plenty of stills from the film, (including the one above) identifying (in a similar manner to the 'reelstreets' website) the exact locations of the scenes where ever possible.  There's nothing I can see on youtube just on Payroll; there used to be a nicely put together montage on Newcastle quayside from Payroll, Get Carter, Spender and Auf Wiedersehen Pet uploaded by pecka2k, but it's not available any longer sadly.

Once the team manage to sort themselves out with a radio jammer, they are ready for the big day, although Johnny has already managed to try and ingratiate himself with Katie (she is playing hard to get though, plainly more interested in whatever deal Johnny has with her husband and in what might be in it for her financially than in Johnny himself).  The second part of the film is also set up, as there are a number of domestic scenes with Parker and his wife (Billy Whitelaw) and their child to establish their happy home life, which is about to come crashing down around their ears as Johnny and his gang put their plan into operation at last:

The gang start arguing and quarrelling amongst themselves in time-honoured fashion whilst they wait for the storm to die down, but there are two extra elements to the film which now start to come into play. The first is Pearson, who must be one of the most suspicious characters in film history - you half expect him to stand by whistling with his hands in his pockets, trying to look innocent - as he immediately arouses suspicion at work by asking to go home after feeling ill after the robbery, and the other is Billie Whitelaw's character, Jackie Parker, the widow of the van driver involved in the robbery, who after her intial grief seeks revenge for her husband's death.  In this scene, Jackie starts to put the squeeze on Pearson, who is already starting to crack, as Katie looks on with disdain: 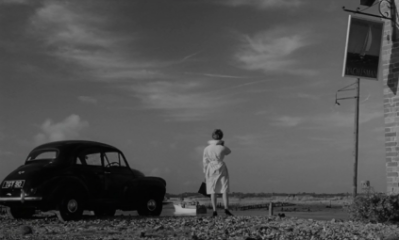 Johnny and Katie, who has found out about the robbery, begin an affair, but Pearson has other things to worry about as Jackie Parker winds up the pressure, although it doesn't take too much for him to start falling apart (as Johnny feared right from the start).  The police soon track down the money as Monty also starts to crack and the gang start to fight each other.  By this time Pearson has become a nervous wreck, trying to burn the money in a hopeless attempt to cover his tracks and although Katie tries to get away with Johnny Jackie is not too far behind, following the couple to the fictional village of Brensham in Norfolk (actually Walberswick on the Suffolk coast, above) for the final showdown, although there are stil some twists and turns in the narrative left. 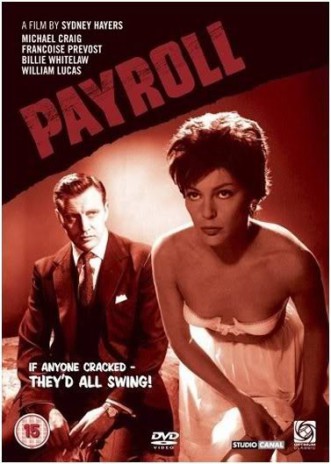 Lucas and Prevost on the DVD cover

Available on DVD for about £7, (and also released by Vintage Classics as well) it can be watched on its entirety on youtube - just type in 'I promised to pay (payroll) 1961' and it will take you straight to the film, in pretty good quality.  The DVD cover features Francoise Prevost fairly prominently, though it is strange to note that her character is, we are asked to believe, from Austria, when she couldn't be more French if they stuck her in a stripey top, put a beret on her head and got her to smoke Gauloises incessantly (funnily enough, talking about smoking, very few characters actually do smoke in the film, very unusual for the time).  I see Robert Murphy is not so keen on the film when he mentions it in his Sixties British Cinema book, but for me it's one of the best of these early 60s crime films, and one I showed during the crime cinema season in my film club in the Emirates.