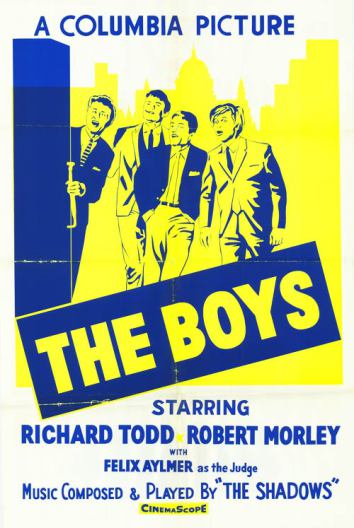 The Boys is a 1962 film directed by Sidney J Furie, coming after The Young Ones and just before The Leather Boys, which also starred Dudley Sutton.  On the surface it is the straightforward tale of four youths - Stan Coulter (Sutton), Barney Lee (Jess Conrad), Ginger Thompson (Tony Garnett) and Billy Herne (Roland Lacey) - who are in court at the start of the film accused of the murder of a nightwatchman during the course of a robbery.  The first part of the film follows the four through the evening of the 15th January, as seen through the eyes of the various persons, now giving evidence, that they encounter.  Richard Todd as the prosecuting counsel has hardly anything to do until towards the end of the film, whilst Robert Morley is at his most pompous and smug as Montgomery, the defence counsel.

The witnesses include Roy Kinnear as a bus conductor who sees the boys knock an elderly lady over at the bus stop before they get on, Wilfred Brambell as a toilet attendant who has an altercation with the lads and tries to throw them out, Colin Gordon as a cinema goer who has a trick played on him by Billy after which they have an argument, Carol White as a girl they pick up in a pub and finally Mavis Villiers as a pub landlady who appears to overhear the four having a recce at the petrol station and planning the robbery.  This last evidence is more damning than most, as it appears to clearly link the youths' plans to the robbery of the safe box at the petrol station, and by the time Montgomery speaks to his clients it is evident that things are not going well, as can be seen in this sequence: 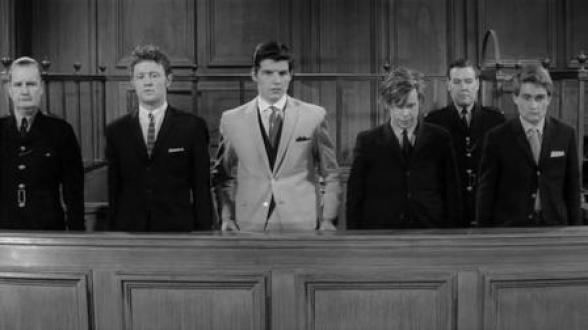 Stan, Barney, Billy and Ginger in the dock

But it is at this point that the film attempts to paint a different picture, as the story is told from the defendants' perspective.  The film is clearly influenced here by Rashomon and its multiple accounts, but I am also reminded of ITV's 'Crown Court', when I used to watch endless repeats of this sorely-missed programme.  After the first part of the story (there were 3 half-hour episodes to each story) I was always convinced of the accused's guilt/innocence, but then once the other side was given I was never quite so sure.

This is the intended effect of The Boys, as we now see each of the four relate the events of the fateful night but with added background to fill out their motives and explain their actions.  Here is one such example; having heard in the first part of the film how Stan turned up at a local billiard room, we now hear his version of the same encounter.  This clip has put the two scenes together for comparison: 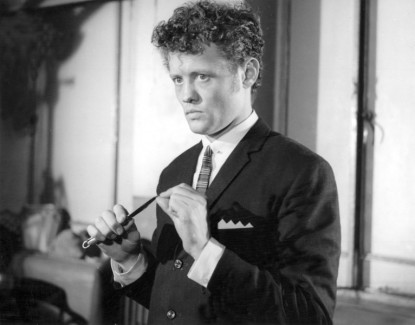 The problem is that Morley's endless attempts to discredit the prosecution witnesses rest on very weak attacks on their understandable stereotyping of the youths as 'teddy boys', 'yobboes' or just 'trouble', and when we see the events through the eyes of the boys, not much has changed given that the events do actually happen but with perhaps some mitigating circumstances.  We see the home lives of the four (they're all good to their Mum, just like the Krays, so they must be all right really) but there is little to suggest that they are just four boisterous youths out for a good time, particularly as at least two of them (Stan and Billy) have knives on them, with Stan especially very keen to produce it to file his nails (!) at every possible opportunity.  It also seems a bit irrelevant to focus on what they did throughout the evening, when the key evidence is that the knife that was used to stab the nightwatchman was found later by the police thrown into the river, matches Stan's knife, and which he appears to have lost even though he admits that he didn't lose it until the next day! 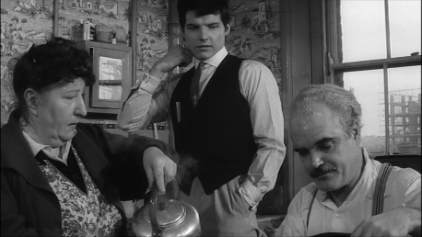 The likes of Rita Webb and Patrick Magee (left) are largely wasted as the parents of the youths, but Felix Aylmer does a great turn as the judge who fits every stereotype of the out-of-touch old duffer as described by George Orwell in 'The Lion and the Unicorn', "whom nothing short of dynamite will ever teach what century he is living in", asking at what point what "yobboes" means which reminded me of the 'Not the Nine O'Clock News' sketch where the old judge, played by Rowan Atkinson, doesn't know what a digital watch or a video recorder are but knows what a deluxe blow-up doll is. 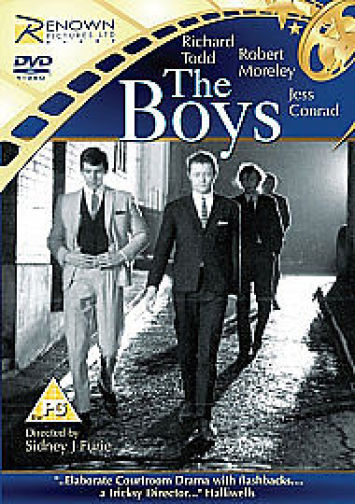 Having spent a great deal of time building up the boys' social background and circumstances, the film then hinges on a single piece of evidence which, of course, nobody had thought of in all the months leading up to the trial until the night before the end of the court case.  This leads to a surprising denoument, unfortunately accomnpanied by a nonsensical speech by Morley as the defence counsel.

Nevertheless, despite the staid nature of the courtroom scenes, along with a couple of absurdities courtesy of Montgoomery's wayward tactics (if I'm ever in the dock, I'll conduct my own defence rather than have him defend me), the flashback scenes paint a vivid picture of early 60s youth on an evening out - whether it is accurate or not is another matter - and any film that has Dudley Sutton, Wilfred Brambell, Carol White, Roy Kinnear, Patrick Magee, Rita Webb and many others in it has got plenty to recommend it.  Even Ian Fleming is apparently in the film, uncredited, but I couldn't see  him.