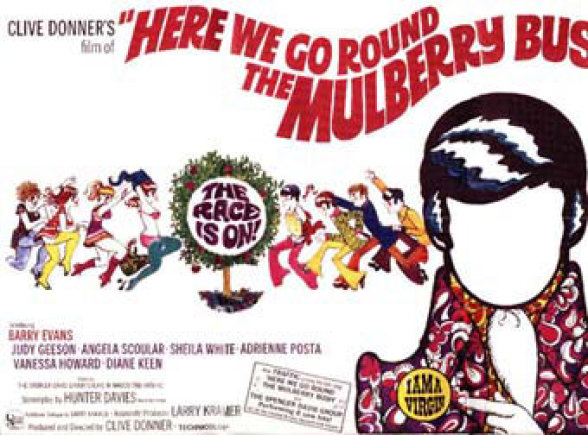 Not so much an unsung film perhaps (there is a surprising amount of material on this film on the web), ﻿as an underrated one.  I showed this in the 60s season when I ran my film club in Abu Dhabi; I would like to say it went down very well, but perhaps more truthful to say that it got a very mixed reception, with at least one person really disliking it.  I remain a staunch fan of the film however, and I am pleased to see that critics such as Steve Chibnall (who wrote the accompanying booklet that comes with the DVD, is there any film this man has not written on?!) are of the same mind.

The film stars Barry Evans as Jamie McGregor, a 17-year-old taking his A-levels, in Stevenage New Town.  Evans is much better remembered now for the ITV sitcom 'Mind Your Language' in the 1970s, and so it is often forgotten that he also took on the Robin Askwith-style role in Adventures of a Taxi Driver in that decade. When my parents first got a VCR in the mid-80s I tried to rent out Taxi Driver from the local video shop, only to be asked by the assistant "Did you mean Adventures of a Taxi Driver?"  No I bleedin' didn't. 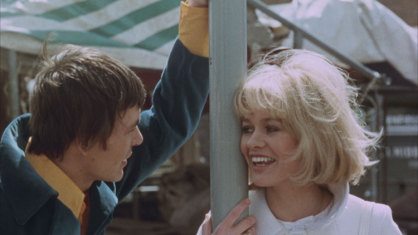 The film basically follows Jamie as he tries to lose his virginity whilst waiting to go to university after his A-levels.  Seen through his eyes in a first-person narrative, he constantly bemoans his fate as others (particularly Spike, played by Christopher Timothy in pre-vet days) seem to be doing much better.  Seen from my perspective, however, Jamie does very well for himself (Portsmouth in 1979 did not seem to offer much in the way of amourous adventures).  Having literally just bumped into runny-nosed Linda (Adrienne Posta) from school, he then spots Mary (Judy Geeson), his ultimate target throughout the film (look out for Marianne Stone, Diane Keen, Christopher Timothy and even Angela Pleasance in this clip):

The title song is quite well known, as it was composed and played by the Spencer Davis Group, who appear in the film (as the band at the church social) and who perform other songs for the soundtrack.  This version from youtube features a performance from Traffic (Winwood's band after The Spencer Davis Group, both seem to have been involved in the soundtrack, don't really understand why).

The film becomes episodic, as Jamie goes through a sucession of potential girlfriends, including Caroline (Angela Scoular, seen in pic at the top of the page), Audrey (Vanessa Howard) and Paula (Sheila White, best known for me outside of this film for her role as Messailna in TV's 'I Claudius').   The sequence with Caroline is probably the best and funniest of these encounters, as she invites Jamie to her home for the weekend, where he meets her parents (Denholm Elliott and Maxine Audley) and indulges in some wine tasting.  However his best chance seems to be with the gorgeous Paula, although I must admit I quite fancy her friend Cath as well (apart from her voice): 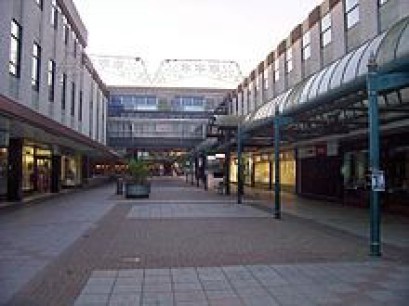 It was interesting to read in the booklet accompanying the DVD that the novel (by Hunter Davies) is set in Cumbria; whilst Clive Donner, the director, was apparently﻿ determined to set the film outside London (Robert Murphy's book on Sixties Cinema refers to a long-lost article in which Donner states that "the notion of 'Swinging London' is anathema to me") and Stevenage suited as it is within 30 miles of London (apparently the crew got overnight allowances if they had to shoot more than 30 miles outside of London!).

There is an extra on the DVD called 'Stevenage', made in 1971 by the Stevenange Development Corporation, extolling the virtues of the titular town, which of course is unintentionally funny as almost all such films are seen from such a distance.

Another film, made in 2004 and called 'Then and Now', shows locations in the film and how they appeared what is now almost 10 years ago.  It is apparently on the DVD but it's certainly not on mine!  Here's part 1, both parts are on youtube: 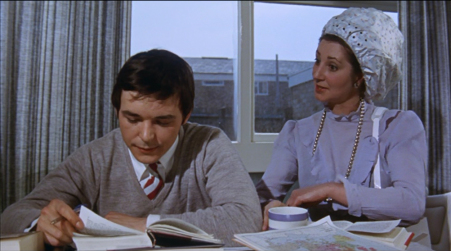 I also really like the little vignettes of domestic life at the McGregors' household, with Michael Bates (seen as, amongst many others, the prison warder in A Clockwork Orange) as Jamie's Dad, obsessed with his football pools (good to see that the Sports Report music was the same 40 years ago) and Moyra Fraser as his Mum, wrestling with Dickens and Dostoyevsky for her adult education class whilst trying to foist endless porridge and pink blancmange leftovers on her restless brood; to make things worse for Jamie, his younger brother Joe (Allan Warren) seems to be doing better with the girls than him.  Here's a liitle snapshot of family life in the mid 60s:

Jamie loses touch with Angela for no particular reason, and moves on to Audrey (who is obviously keen on him) and he finally achieves his aim at a party Audrey has invited him to. Nonetheless he still wants the seemingly-unattainable Mary, but in time-honoured fashion she treats him in the same way as he has treated Audrey and the others, so he foresakes women and gets on with his A-levels. 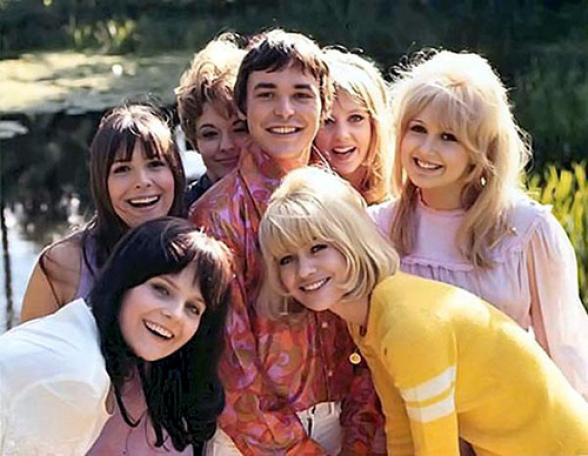 One element of the film has definitely aged very badly - the fantasy elements that creep in with each new girl. Donner uses all the faddish 60s film-making styles here, and it is, quite frankly, awful. If only somebody could have tapped the likes of Donner and Richard Lester (although not sure the latter would have taken much notice) on the shoulder and said 'don't do that, you'll regret it in 20 years' time'. 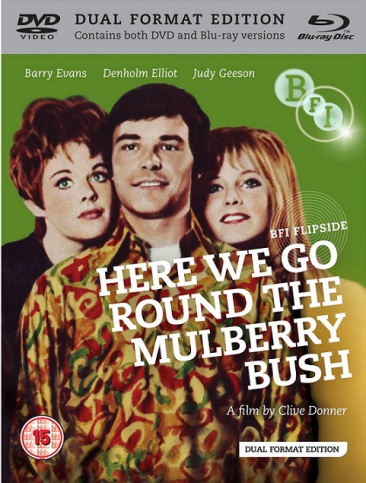 That aside, Here we go... gets a big thumbs-up from me, and I can't say that about too many late '60s films. Barry Evans makes Jamie a likeable character in spite of his rather caddish behaviour, the girls are all lovely (surely there weren't really all those beautiful women kicking about Stevenage then?) and as mentioned there are some excellent supporting roles from the likes of the ever=-reliable Denholm Elliott.

The film has been released in the BFI Flipside series, in DVD and Blu-Ray versions, with the usual very informative booklet to accompany (in addition to the aforementinoed Chibnall essay, and Hunter Davies' reminiscences, there are short pieces on Barry Evans and Clive Donner, as well as Stevenage and the DVD extras) - well worth getting hold of, although the price seems to have gone up again since I got my copy for about £10, cheapest now seems to be about £14.  The BFI have also released a DVD version only for about £8 [Feb 2017 update].  Alternatively you can see the whole film in quite good quality on youtube, having been uploaded by Andy Seven and Barry Evans films amongst others.﻿

The pic at the top shows Barry Evans with Angela Scoular