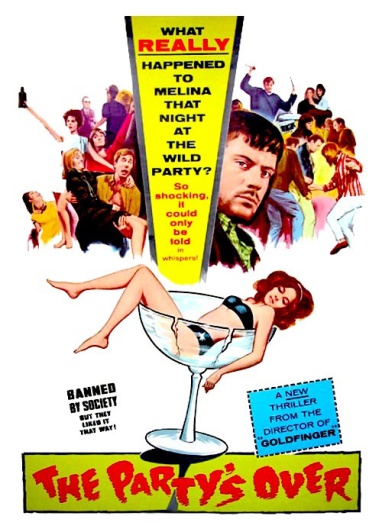 The date of the film is a bit ambiguous, due to its protracted post-production history and censorship problems, which caused its original theatrical release to be delayed by about 18 months, as I'll go on to below.

I first heard about The Party's Over in Robert Murphy's book British Sixties Cinema.  It sounded intruiging, and along with a shot of Oliver Reed from the film and a great line of Reed's (of which more in a moment) it went straight onto the list of 'must-see' films, although it took some time to eventually get to see it, but I managed to buy it on DVD as part of the BFI Flipside series.

The film opens at a party, which is clearly meant to be decadent.  Here is the pre-credit and credit sequence, with director and prodcuer's credits removed, for reasons detailed below:

The added prologue (of which more below) says that the film looks at a group of 'beatniks' - this includes Moise (Oilver Reed), the self-appointed leader of the group, Nina (Catherine Woodville, about to get married to Patrick Macnee of 'The Avengers' fame), Libby, his sort-of girlfriend (Ann Lynn, excellent as ever), the rather older Tutzi (Maurice Browning), tortured artist Geronimo (Mike Pratt, familar to those who followed 'Randall and Hopkirk: Deceased' many years ago) and Melina (Louise Sorel), an American drifter.  One strange point - generally irrelevant, but things niggle away at me - is that although everyone gets a credit, including Barbara Lott as the 'almoner' in the morgue - one of the group, who seems to be Fran's boyfriend and has a number of lines, is not mentioned, so I don't know the name of the character or who played him (in the opening sequence above he is being held up by Mike Pratt and Annette Robertson as Fran, incidentally married to John Hurt at this time).

Melina providees the focus of the story, as her American fiance, Carson (Clifford David) arrives at her father's behest to take her back home to the States.  Carson is an employee of the company of which Melina's father is the director, so marrying the daughter of the boss is a good career move; problem is, Melina doesn't seem very sure what she wants from life, so she tries to avoid Carson, aided and abetted by her friends in the group who, led by Moise as usual, decide to have a bit of fun at Carson's expense: 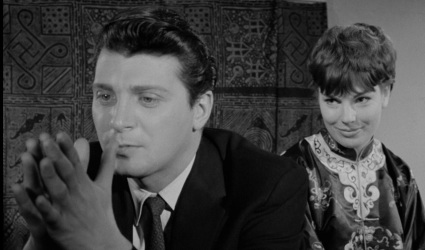 Carson takes up residence in Melina's flat, atlhough Libby has decided to turn up there of her own accord, promising to take Carson to see Melina at a party that evening after she finishes singing at the jazz club at 2am; Libby has her own reasons to want to see Melina out of the way, as Moise keeps hanging round her, possibly because she's the only woman to  say 'No' to him, as she clearly despises him.  Tutzi's advice to Moise to stick with Libby is met with the telling response from Moise: "She keeps saying yes".

By the time Libby and Carson arrive at the party at Geronimo's 'pad', all is quiet and Melina seems to have already left, with nobody able or willing to tell him where she has gone (for good reason, as we find out later); only Phillip, drunk and grinning inanely, says that "I kissed her, she doesn't like to be kissed, but I kissed her" before passing out.  Back at Melina's flat, he finds two of her suitcases packed but no Melina, and ends up in Nina's flat just down the hallway. There is an immediate attraction between them (strange, given that he has travelled half way round the world to find his fiance) and he stays the night.  However someone (soon revealed to be Libby) takes the suitcases away in the meantime and takes them over to Moise's houseboat. 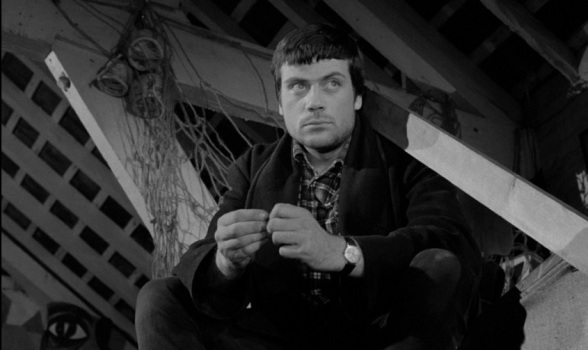 It's very hard to fathom Moise's character; he comes across as pompous and pretensious, but at other times he himself deflates the pronouncements of his 'followers' (as when he calls them sheep in the above clip).   He treats Libby with near-contempt (which only means that she follows him even more slavishly, rather uncomfortable viewing for modern viewers) whilst Melina fascinates him.  He tries to ridicule Carson throughout, but perhaps hadn't expected the latter to have some steel behind his bland facade and give as good as he gets.  His best line remains surely the one in the clip above "Me? I'm just a fly in the soup at the tycoon's banquet" which feels as though it was written for Reed. 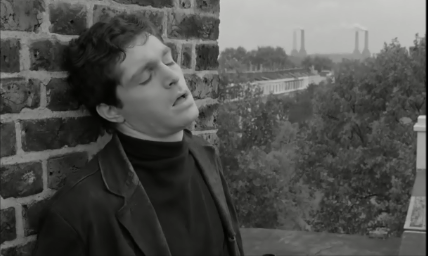 The next morning, with Nina and Carson now established as a couple, they find Phillip in some despair, wanting to know what has happened to Melina and blaming Carson, of all people, for her disappearance.  His reaction seems exaggerated and overwrought, and there is clearly something being concealed as he doesn't quite seem to know how to come to terms with things, and, making for the roof of the building, and despite Moise's shouted warning "You haven't done anything bad, boy!  Nothing you can't live with!"  he allows himself to fall off to his death.  Carson now suspects that something terrible has happened, and that Moise and the others have been lying to the police about the reason for Phillip's suicide, but as he seeks explanations from Nina and then Moise, unusually (although one exception I can think of is in Billy Wilder's Witness for the Prosecution) their flashbacks are false: 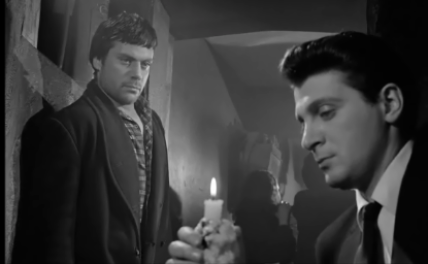 Ben Morgan, Melina's father, also arrives in England, having suspected something was wrong when he gets a telegram from Carson rather than a phone call.  Carson by this stage seems to have had a complete change of perspective, and is clearly not going to go back to the USA, in effect resigning from Morgan's business.  He keeps pressing though, and eventually wears Moise down, and we get the truth of what happened in another of Moise's flashback, with Carson suggesting that Moise grows up.

Melina's body is found, and the incident is marked down as a hit-and-run incident (I don't know too much about police forensic procedures in the mid-60s, but I would have thought that they could tell the difference between someone falling and hitting their head, and being hit by a car, with all the other injuries that that would entail, but there you go) and Morgan returns to the States with Melina's body whilst Carson stays with Nina (there are two different endings, but the key points remain). 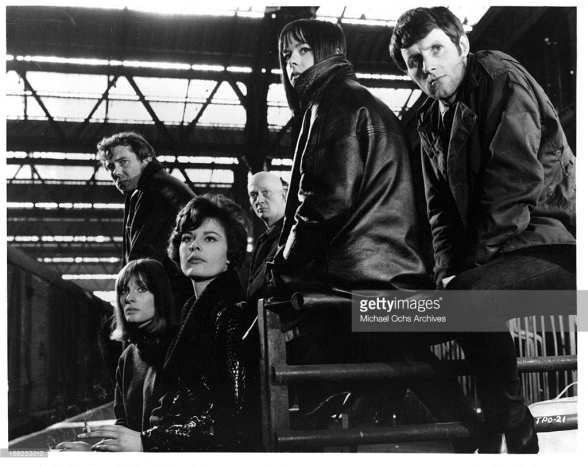 This shot of the group only features in the original ending

Due to certain elements in the film it hit problems with the BBFC (this is fully recounted in the booklet that accompanies the DVD, see below), and when it was submitted to the BBFC in March 1963 John Trevelyan still found the film "unpleasant, tasteless and rather offensive" (although this alone would make me want to watch it!).

The film was eventually released in 1965, with two major changes.  The first is that there is a voiceover, voiced by Oliver Reed, just after the scene at the top of this page, and just before the credits, as follows:

This film is the story of some young people who chose to become - well, for want of a better word - 'beatniks'.  It's not an attack on beatniks; the film has been made to show the loneliness, and the unhappiness, and the essential tragedy that can come from a life lived without love for anyone or anything.  Living only for kicks is not enough.

The second major change is that the ending of the film focuses on Nina and Carson, heading off to Stow-on-the-Wold (where her parents live - Carson at first think she's making it up!) whereas the orginal, pre-censored version focused on Moise, Libby and the gang (the pic above, of the gang waiting for Moise, following him as usual, is from this version), and it was these changes, and the general wrangling over the film, that led to director Guy Hamilton (who went on to direct several Bond films) and producer Anthony Perry to remove their names from the credits. 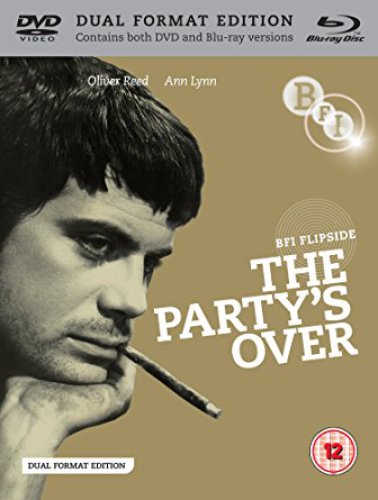 The DVD has been released as part of the BFI Flipside series (see DVD page on this website) in dual format (DVD and Blu-Ray) with an excellent booklet on the film, its production history and in particular the censorship points covered above.  One version of the film features on the DVD, the other on the Blu-Ray disc, with extras on the DVD showing the key scene and dialogue changes.  Having read the booklet, it explains the changes in the quality of the picture which occur from time to time, as the scenes which have some damage to the film are the ones that were put back in to show the pre-censored version.

Despite some rather, shall we say, weak and wayward performances from the likes of Louise Sorel (who comes across as a complete blank canvas) and Mike Pratt (is that really the best Yank accent he can come up with?) the presence of Reed, Ann Lynn and the intrinsic interest of a fairly unusual storyline more than make up for it, and overall The Party's Over is a sombre and unsettling film, which puts the mockers on 'Swinging London' before it had even got going, and it can be seen to be a key 60s British film.