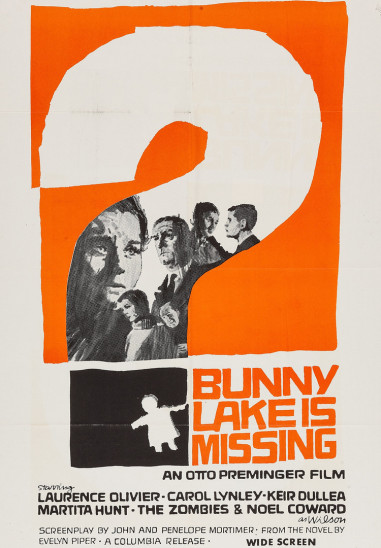 An early example of the American takeover of British cinema, this 1965 film was directed by Otto Preminger, a veteran of film noirs from the 40s such as Laura, Whirlpool and Where the Sidewalk Ends, and starred two Americans, Carol Lynley (later to appear with Oliver Reed in The Shuttered Room) and Keir Dullea, later to find fame in Kubrick's 2001: A Space Odyessy.  However the film is set in London (although the original novel, which I've not read, was not) and the rest of the cast are British, so it counts in my view.

Ann Lake (Lynley) and her brother Steve (Dullea) have just moved to London from the States, where he has a job as a high-powered journalist.  As the film opens they are moving into their new home (at this point we are led to believe, or naturally assume at least, that they are husband and wife) and the first time we see Ann is as she is coming out of the aptly-named 'First Day' room at the Little People's Garden School in Hampstead, having left Bunny, her daughter, there (although we have not see Bunny ourselves).  There seems to be nobody around at the school, but she manages to find a German cook who appears to be more interested in 'junket' (a kind of soup I assume, never heard of it) but promises to check on Bunny.  Ann leaves to meet the delivery men at the new flat.  After some unpacking, and meeting her extremely unpleasant and creepy landlord/neighbour Wilson (Noel Coward, having a field day), she heads off to school to pick her daughter up at lunchtime.  But there's a problem (you'd never guess what it is from the title):

Once Steven arrives, the search picks up pace, as he challenges the teacher in charge (Anna Massey) and then goes off on his own to search the premises, forcing his way into a private flat above the school where he finds Miss Ford (Martita Hunt, above), retired now but a co-founder of the school who spends her time researching a book on children's fantasies.  Hunt's most famous film role was that of Miss Havisham in David Lean's 1946 version of Great Expectations, and this is a vaguely similar role for her, sitting up in her dark flat with her equally dark thoughts. 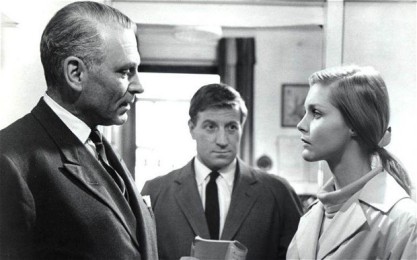 The police are called in, in the shape of Superintendent Newhouse (Laurence Olivier) and his sidekick Andrews (Clive Revill, who hardly gets to speak a word throughout the whole film) as they try to work through key actions in the so-called 'Golden Hour' (the name given to any time period immediately after a critical incident - although the time can be any period whatsoever, along the lines of 'how long is a piece of string?').

This kind of incident resonates with us probably even more now that it did then, with Madeleine McCann still vivid in people's minds.  The investigation does seem to be hampered however by one small niggling fact; there appears to be no trace of Bunny anywhere.  Nobody has seen her, there is no photo of her, no record of her arrival or even registration at the school.  Events then take on a more sinister turn when Ann remembers that there will be a photo of Bunny in her passport which is back at the flat (all the family photos have not yet been unpacked), but when they go back they find that all Bunny's belongings have been removed, presumably suggesting a kidnapping. Yet Supt Newhouse finds that Miss Ford has planted seeds of doubt in his own mind which occur to us, the audience, at about the same time:  does Bunny Lake even exist?  In this scene he gives voice to those doubts, confronting Ann Lake:

There is something really discomforting about Keir Dullea in this film, partly becuase he reminds me, somehow, of Ian Curtis from Joy Division, (see below) but mainly becuase he has an air of barely controlled derangement about him, which Preminger takes full advantage of. 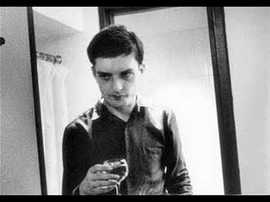 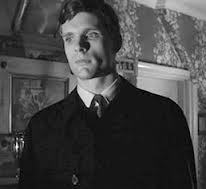 Noel Coward's role in the film is strange - was his character in the original book? - and is entirely of the red herring variety, but to say that he makes the most of his relatively short time on screen is something of an understatement.  In a part which feels as though it has been specifically written for him, he attempts to seduce Ann purely through the medium of his 'melodious' voice.  There is plenty of scope for in jokes as well, as Sgt Andrews complains to his senior officer that Wilson is a "bloody pervert", Newhouse replies "Please, Andrews, he works for the BBC"; something similar could be said these days about that arsehole Jeremy Clarkson, except that he certainly does not have a melodious voice (or indeed anything else which could be of benefit to mankind in general).

Ann then gets a new lead in her quest to prove Bunny's existence - a ticket for a doll she took to a dolls' hospital (they do exist!).  In this scene she makes an after hours visit to the shop, encountering Finlay Currie amidst the dolls heads.  And if dolls heads aren't creepy, then I don't know what is (apart from the thought of Larry David sticking one down his trousers in an episode of 'Curb Your Enthusiasm'): 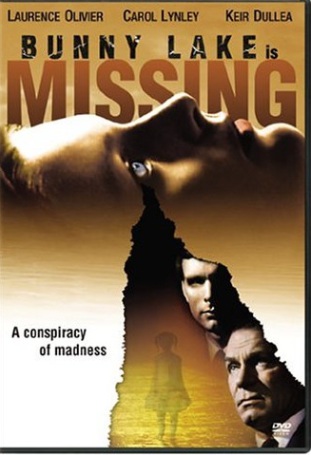 That clip may give some of the game away, for which apologies, but it's just too good a scene not to show.  In addition to the already mentioned Noel Coward, Finlay Currie and Anna Massey, there are a host of other Brit character actors with small cameo roles, including Richard Wattis, Victor Maddern, John Sharp and Megs Jenkins to keep star spotters like me more than happy.

I found the conclusion somewhat mundane, and something of a letdown after the previous 90 minutes, but it does make me want to to read the book, as I'd like to know what the original ending was (it was changed quite a bit apparently by John and Penelope Mortimer).   The DVD can be bought for less than £5 , but, along with plenty of my own clips, the whole film can be seen on youtube.

Just make sure you watch it with a friend - as long as they're an imaginary friend of course.