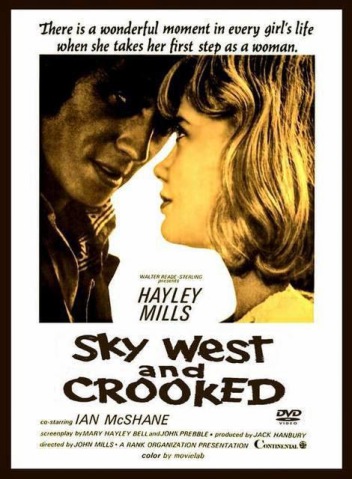 Sky West and Crooked (the phrase originally meaning someone who was ‘not quite right’) is John Mills’ only directorial effort, and stars his daughter Hayley Mills with the original story by his wife Mary Hayley Mills; nothing like keeping it in the family. Unsurprisingly then, it does feel very similar to Whistle Down the Wind, made four years earlier, also from a story by Mills’ missus and starring his daughter - and with music by Malcolm Arnold again.

Set, like the earlier film, on a farm (or at least in a rural area I suppose), although there is a more tragic background to Sky West and Crooked, it is Whistle Down the Wind that feels bleaker; there is a lighter, summery feel to SWAC, possibly as it is made in colour.  The story involves 17 year old Brydie White (Mills), who is, as one of the characters in the pub comments, 'sky west and crooked', living with her slatternly and frequently inebriate mother (Annette Crosbie), who comes to the notice of broodingly handsome gypsy Roibin (Ian McShane), one of the few people who see any worth in Bridie.  There is a dark past however which is made clear in the opening of the film, which also introduces the two main characters, along with Hamilton Dyce as the sexton and Hamlet, who plays himself: 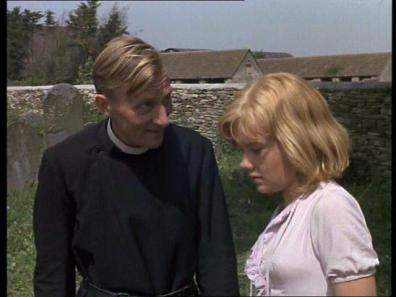 Brydie seems to have an overriding interest in death and burial, and her relationships are mainly with children much younger than her (in the film she says at one point that she is 17, although Hayley Mills herself was about 19 when the film was made). This brings her into contact with the undertaker Mr Cheeseman, played by Norman Bird, who simply reprises his role from Whistle Down the Wind (ie a cantankerous old git in one film, cantakerous old git in the other).  At one point she upsets the village, and Reverend Moss (Geoffrey Bayldon) particularly, when the churchyard gets taken up with the graves of a variety of pets and small animals, put there by the children in the village, orchestrated by Brydie.

When the Rev Moss remonstrates with the unusually large congregation on the Sunday morning regarding this issue (village life must have been very dull for the burial of a few hamsters and mice to create the highlight of the week) talk in the pub and elsewhere focuses on Brydie and what to do with her, the sexton remarking ominously to Brydie's mother, in response to her comment that "Brydie's a child" that "she's starting to fill out a bit".  When she says that she hasn't noticed, he replies straightaway "Well, some has" meaning Roibin.  After the Reverend speaks to both Brydie's mother and to Mr Dacres (Laurence Naismith), the father of the boy who was killed in the accident at the start of the film, there is a showdown between Brydie and her mother which almost ends in tragedy: 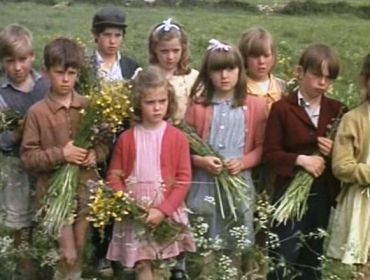 "Never work with children and animals" - SWAC breaks both rules

As one might imagine, whilst the villagers seem to have a fear and distrust of the gypsy community, the feeling is mutual and the other gypsies (who include Alan Lake) are not exactly overjoyed to see Roibin bring Brydie back to their encampment, thinking (quite correctly) that it will only bring trouble for them.  Brydie is nursed back to health, but she knows that she will have to return at some point to the village.  Roibin tells her that the camp will have to move on soon, to Wales, but shows her a way that she can follow, using a system of following sticks and twigs which point the way, which is probably an improvement on SatNav.  What Brydie doesn't know is that in her absence her mother has died, but the children, after watching the funeral, find her and tell her what's happened, leaving her with a decision to make:

The location scenes were filmed in Little Badminton in Gloucestershire, according to wikipedia, which is not far from Chipping Sodbury north of the M4, but for once reelstreets.com don't have any 'then and now' photos, but here are some images off the net, all taken in the last 3 years or so, for comparison. 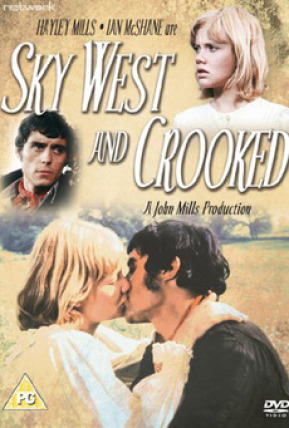 I won't give away the ending, as I try to avoid that on these pages as the idea is to encourage people to watch the film.  There are a number a number of clips on youtube, and the DVD can be bought for less than £7 from sites such as play.com.

Malcolm Arnold's music, whilst not as memorable as his score for Whistle Down the Wind, is still pretty good and can be heard on youtube, just type in 'Malcolm Arnold Sky West and Crooked' and there will be some options, one for example uploaded by James Stuart.

It's one of those slightly off-kilter films that retain a lot of interest for film fans over the years as much of this period of British cinema is being re-examined and re-evaluated.  Recommended as always in this section of the website (I wouldn't write about it if I didn't like it would I?!)