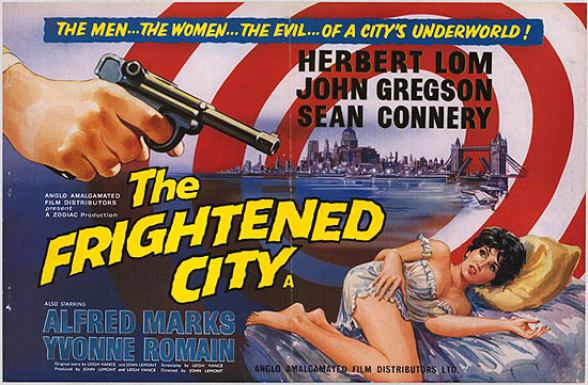 The Frightened City, made by John Lamont and Leign Vance (directed by the former, written by the latter, produced by both) is one of the 'new' breed of crime films that emerged in the late 1950s and early 60s, with a more realistic and grittier approach to policing and crime than had previously been the case in the 1950s. They had both been responsible for The Shakedown a couple of years earlier, a story of a blackmail racket run by Terence Morgan.  In The Frightened City (a great noir title, surprised it hadn't been used by the Americans before) we see the start of organised crime, using legitimate businesses as a front for less than savoury activities behind the scenes, the sort of scenario that was to become very familiar over the years.

The film opens with a classic 60s theme, written by Norris Paramor (who was associated wtih Cliff Richard and the Shadows at this time) who plays the pianist in the nightclub scenes.  As the music starts there is a horrible moment when you think Frankie Laine might start singing, but it turns out to be an instrumental, in fact one which The Shadows had a hit with in 1961, reaching number 3 in the charts: 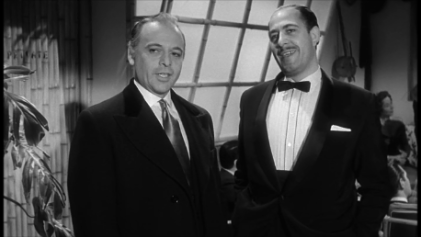 The film opens as the protection rackets seem to be getting out of hand, with one nightclub smashed up by Freddie Farmer (Patrick Jordan) and two hoods (with Marianne Stone as a barmaid looking on at the mayhem) and two police officers, Insp Sayers (John Gregson) and Sgt Ogle (Frederick Piper) unable to break down the wall of silence.  Sayers is - surprise surprise - a cop 'who doesn't play by the rules' and causes his senior officers some headaches, although his actions appear to be justified in the long run (searching without a warrant, but finding the stolen goods).  Nowadays all the evidence would be inadmissible, but back then all you got was a sigh and a shake of the head from the boss.  Anyway, it is clear that the protection rackets are small time, and Waldo Zhernikov (Herbert Lom, right, playing yet another unspecified nationality), a ruthless businessmen who is not afraid to get involved in not-strictly-legitimate activities, sees an opportunity to buld something more substantial.  He is soon able to persuade Harry Foulcher (Alfred Marks, above) as one of the leaders of the protection rackets, to try and get things more organised by seeking the cooperation of the other gang leaders, and Foulcher calls a meeting for such a purpose:

The person he has in mind is Paddy Damion (Sean Connery, left) who is seeing Sadie (Oliver McFarland), a singer at Foulcher's Taboo Club.  Damion doesn't want to get involved at first - he is a 'climber' by trade ie a cat burglar  - but when he finds out that his partner Wally Smith (the ever-reliable Kenneth Griffith) has been permanently disabled after an accident on a previous job, he decides reluctantly to become the 'tough but intelligent' front man that Zhornikov demands. 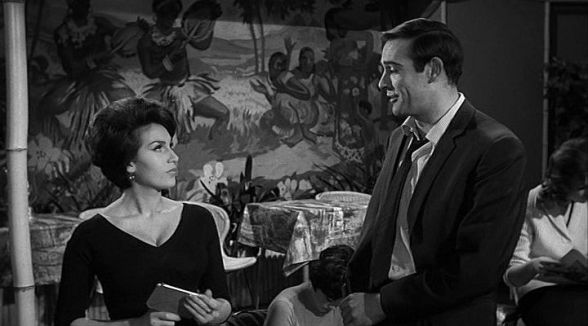 He has more reason than before to become a regular at the Taboo Club, where he meets Anya (Yvonne Romain, above), whom Zhornikov is pushing as a singer at the club.  Anya is supposed to be French, although she comes across as Italian in looks and manner; yet Romain herself was born in London as Yvonne Warren. Foulcher is pressurised by Zhornikov to give Anya a slot as a singer as well as a dancer, and as so often in these films this means that a few minutes are taken up with her performing a song, although in this case the song, 'I laughed at love', isn't too bad.  Paddy's rather too obvious interest in Anya isn't appreciated by Sadie (who is already ill disposed towards Anya, having lost a number in the show to accommodate her), and at a party it is obvious that he is cheating on Sadie, much to Wally's disgust.

In the meantime Zhornikov, who is determined to raise the level of operations whilst avoiding unwelcome publicity, calls for Foulcher and Damion to see him so that he can explain his plans:

All is going well it seems, but Alf Peters (David Davies), apprehensive from the start, is highly displeased at this new turn of events, arguing that it wasn't what he signed up to and concerned that by overreaching themselves the syndicate will bring the whole operation down.  Rather than accept the majority vote he walks out, but he doesn't wait for any action against him before he decides to strike first: 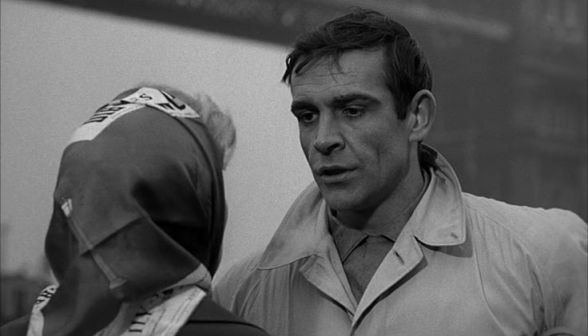 It isn't long before Damion is picked up by the police - Anya betrays him - but we get an insight into the workings of the police at the time, not only in the form of Sayers but also his Sgt, Ogle, as Sayers asks him "How far are you prepared to go to tidy this whole thing up? Foulcher, the top man, the whole mob at the back?"  "The whole way, short of losing my pension" is the reply.  There is a strong sense that the rules work in favour of the criminal and that it is morally right to bend the rules to secure a conviction, a view which hadn't been heard before in British films such as The Long Arm or The Blue Lamp but was one that was frequently expressed in later films and TV programmes like The Sweeney.    When we see, via a newspaper headline, that Damion has escaped from court it is clear that this was arranged by the police so that they could track him in the hope that he will lead them to Foulcher and the 'top man' behind it all.  After a brief chat with Sadie (above) that is exactly what Damion does, and he heads off for a showdown wtih Foulcher and Zhornikov. 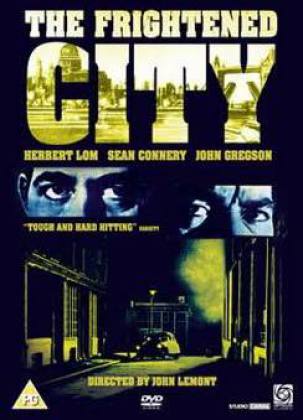 A film which seems to still fall under the radar, it is infrequently shown on TV and the DVD, released about 6 years ago, is quite pricey still, I haven't seen it for less than £10 on the web.  I have particularly fond memories of the DVD, as I bought it just before we went out to Abu Dhabi, and all my other films had gone off in the heavy baggage, so when we got there it was the one film I had to watch until all the baggage arrived.

Others to feature in the film include Bruce Seton as the Assistant Commissioner, Patrick Holt as a superintendent, JG Devlin as a 'nark' in a brief scene, and the eagle eyed might spot, in an even briefer appearance, Stephen Lewis (Blakey from On the Buses) plays an unlikely hoodlum ('Alf's 1st thug, credited as Stephen Cato) throwing a grenade into a restaurant.

One of the many late 50s/early 60s crime films which painted a more realistic picture of criminality at the time, this is an unfairly neglected film which seems to get better with age.