From the novel by Lynne Reid Banks published in 1960 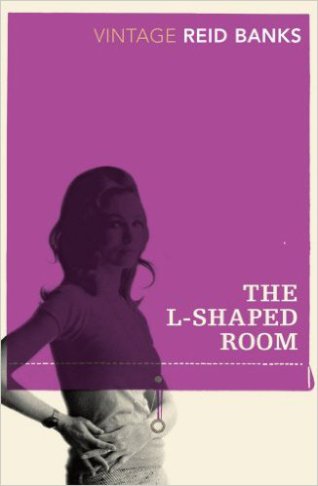 The L-Shaped Room was Lynne Reid Banks' first novel published originally in 1960 and then by Penguin in 1962, when Bryan Forbes wrote and directed the famous film version.

The novel tells the story, in the first person, of Jane Graham, a 27-year-old unmarried pregnant woman, thrown out of the house by her father due to the aforementioned pregnancy, who has to find lodgings and ends up in the l-shaped room.  The book opens with this scene:

There wasn't much to be said for the place, really, but it had a roof over it and a door which locked from the inside, which was all I cared about just then.  I didn't even bother to take in the details - they were pretty sordid, but I didn't notice them so they didn't depress me; perhaps because I was already at rock-bottom.  I just threw my one suitcase onto the bed, took my few belongings out of it and shut them all into one drawer of the three-legged chest of drawers.  Then there didn't seem to be anything else I ought to do so I sat in the arm-chair and stared out of the window.

The first two chapters however are almost all 'flashbacks', explaining how she came to be in this situation, and one of the themes of the book is her relationship with her father, and her life before she came to the L-shaped room and the contrast with her current situation. 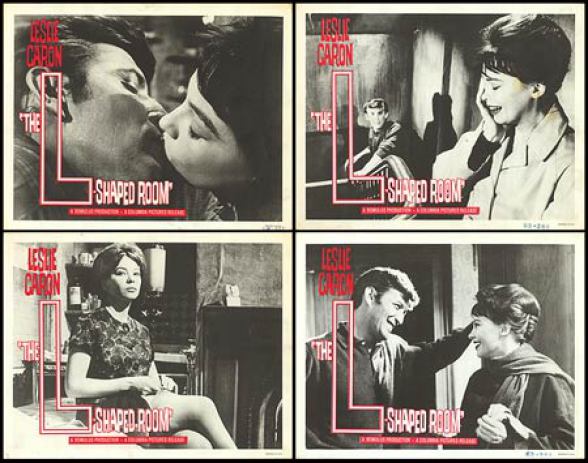 The film however has excised all the backstory completely (probably wise, in a film that is already two hours long) and concentrates solely on the house and its inhabitants.  In this scene (not in the book) we are introduced to Jane and to her dreadful landlady Doris, played with relish by Avis Bunnage: 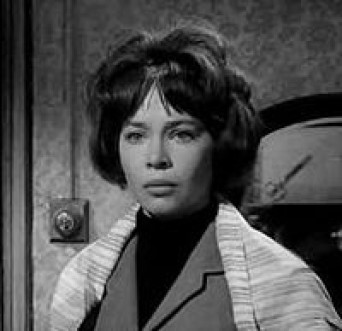 The casting of Jane Graham is a strange one; Leslie Caron seems to fit the role like a glove, and she is certainly very good, but casting her of course means that the character has to be French; this is not a problem, and it doesn't really have any bearing on the plot as such, but one has to wonder why they went down this route when there were lots of actresses who could have played the role perfectly well.  My own choice would have been for Ann Lynn.

As in the book, we are introduced to the other characters in the house; Toby (Tom Bell), a struggling writer, John (Brock Peters), a black man living next door who can hear everything through the paper-thin walls, Mavis (Cicely Courtneidge), a retired actress living alone with her cat but who hears and sees all, Doris, and down in the basement Jane and Sonia, two prostitutes whom Jane goes to visit at one point, intrigued as she is by them, in one of the many scenes replicated in the film: 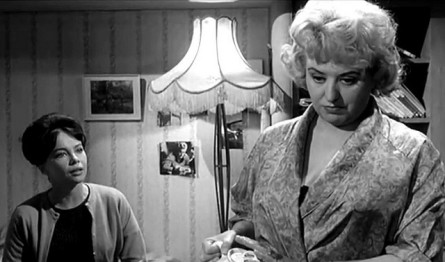 Sitting in front of a small baby-frilled dressing-table to put on her make-up - a fascinating procedure - she remembered again to ask what I'd come for.  As I wasn't very clear about it myself, it was naturally difficult to think what to tell her; but I managed to falter something unconvincing about borrowing something.  She laughed.

'Don't give me that!' she said kindly.  'You'd have asked at the door if it had been that.  Come on, tell the truth and shame the devil - what are you, one of these writers?  Or an actress, going to play a prossie or something, is that it?  I've met your sort before.'  But she didn't seem at all angry, just amused.

'Now you're going to ask me if I hate all men.  Well, I don't.  You can't hate what you don't respect.  I'm sorry for them - I don't suppose you believe that,but it's true...You probably think my life's some kind of tragedy, but I'll tell you - one of the hardest parts of it's keeping a straight face. I mean, if you're not enjoying it yourself, you can't help but think how funny men are when they're doing it.  Puffing and blowing, their bottoms stuck in the air - well, I mean, it's funny - like, undignified.'  She started going through her bag, making sure she had everything, like a woman going out for an ordinary evening.  'Girl I knew - Holy Roman she was,Irish - she used to say God thought it up as a joke, and when he found people taking it serious instead of laughing, he was so put out he made it a sin.'

Here is the scene in the film, where for some strange reason the names of the two prostitutes have been switched round, so now Pat Phoenix plays Sonia and the Hungarian giril (who doesn't get a speaking part in book or film) is Jane:

The problem the film has is that, in removing all the background story of why Jane is in Fulham in the first place, it struggles to put her subsequent romance with Toby into context.  In the book she is determined not to have anything to do with the other tenants, and afher she goes to bed with Toby it is explained why this is so important to her as she reminisces about how she got back together with her old boyfriend whilst on holiday in Cornwall, only for it all to end in disaster when they finally go to bed together.

Terry, the baby's father, leaves and goes to Paris in the book, only returning at the end by chance; in the film he appears quite early on, but in effect plays the same role and there is no question of him returning to Jane's life. 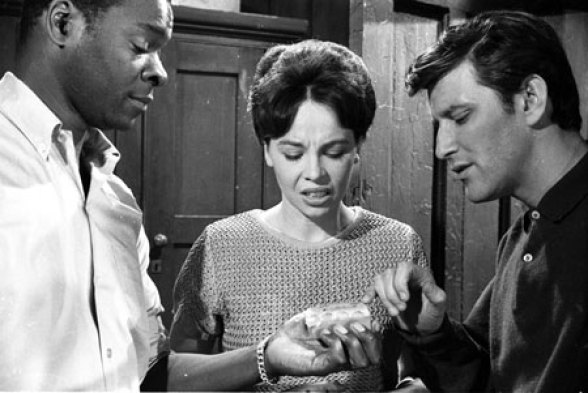 As one might expect, there is quite a lot of playing around with the chronology of the narrative, and whilst a lot is dropped from the novel, there are some new key scenes in the film.  One such is a very touching scene with Jane and Mavis, which is beautifully filmed and does not feature in the novel at all:

The other, which is well known to Smiths fans, is the scene on Christmas Day where the whole house (apart from Toby, who is sulking) gather together and Mavis sings 'Take me back to dear old Blighty' before they realise that Jane has gone into labour. In the book however they simply have a drink with Doris and the others on Christmas Eve, and on Christmas Day her great-aunt Addy (a character who never features in the film at all) turns up and takes her away for several weeks to stay with her. 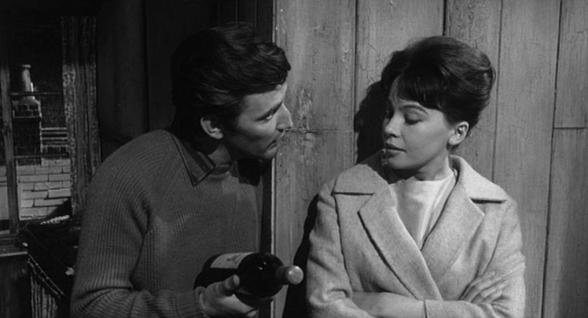 The end of the film reminds me a little bit of Pulp's 'Common People':

Rent a flat above a shop, cut your hair and get a job.
Smoke some fags and play some pool, pretend you never went to school.
But still you'll never get it right
'cos when you're laid in bed at night watching roaches climb the wall
If you called your Dad he could stop it all.

Both film and book end quite tamely in that respect, as Jane's father turns up once the baby is born (boy in the book, girl in the film) and takes her home again, all forgiven. In the book her aunt Addy has died and left her quite a lot of money (convenient, that) but her relationship with Toby is left open-ended:

I longed for the time when we could safely and unpossessively lay claim to each other. But I felt so happy about him, it didn't matter too terribly that he wasn't mine yet, and might never be.

The last scene in the book is lifted for the film. In it, Jane returns to the L-shaped room (for no real reason in the book, in the film she has the excuse that she has to collect a suitcase) where there is a new occupier (played by a hard-faced Nanette Newman in the film):

'So you haven't met anyone else in the house?'

'Oh, I've met them,' she said. 'You can't help it. That John. He looks after me like he was my mother or something. I was afraid of him at first, but he's so kind you couldn't hurt his feelings. And there's an old married couple on the first floor - they're always sending little notes asking me to have supper with them. And then, there's a chap just underneath me. He works in a garage. He looks quite nice - must be miserable for him there, doing for himself. But I'm not going to get mixed up with them. I'm just not. it's like with doing up the room. Once you get started there's no end to it. They get friendly and soon they find out all about you, and your life's not your own any more.'

I sat there, savouring an uncanny feeling of omniscience. I could see the future as clearly as if I were sitting through a film for the second time.

'I suppose you can''t understand how I feel,'said the girl defensively.

She was watching me now. 'It must be funny for you, seeing me in this place. Though I don't know how you could ever have been fond of it...' She glanced round with distaste. At the same moment her foor was unconsciously straightening the rug.

Just before I left. the girl faced the mantelpiece and said with sudden vigour: 'One thing I am going to do, and right this minute, is to put those awful dogs out of sight. They really upset me, they're so ugly.' She was putting them in a suitcase under the bed as I said good-bye.

The clever twist in the film is that Toby, visiting Jane in hospital after the baby is born, has written a short story called - of course - 'The L-Shaped Room'.  In this final scene she places the story back on his typewriter, but adds that it needs an ending... 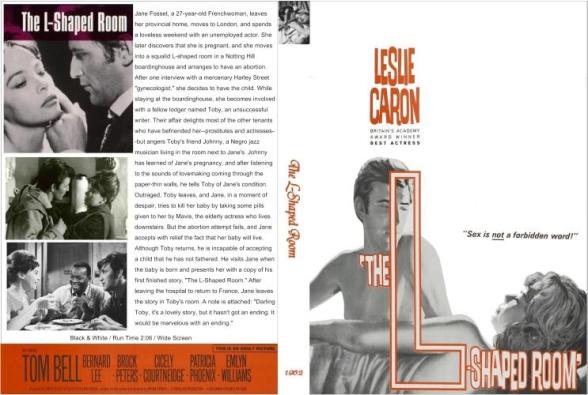 You can buy the DVD of The L-Shaped Room for less than £8, whilst the book can be bought for less than £2 from abebooks.co.uk.  There were two further books by Reid Banks, making a trilogy, called The Backward Shadow and Two is Lonely, which I've just bought, so it will be interesting to read those; but she will be forever known for this book, not least due to the film version.