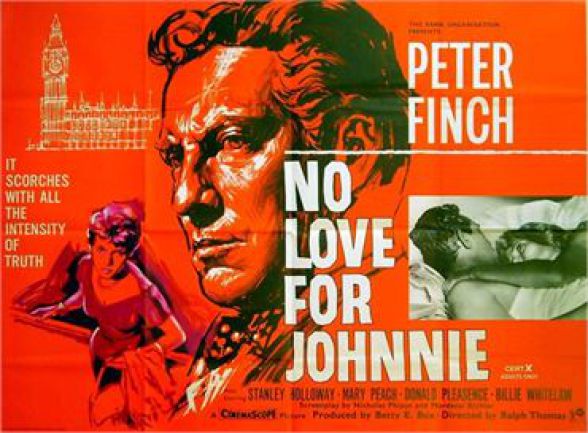 A good example of the range of British film making in the early 1960s, No Love for Johnnie is a political drama based on the novel by Wilfred Fienburgh, who was a Labour MP from 1951 until his death, in a car accident, in 1958 at the age of only 38. The film follows the book very closely, although in the book there are 'flashbacks' to Byrne's earlier life, both as a kid and also in the army, although to be honest these sections add very little to the story and the film quite rightly cuts them out.

The film opens with Johnnie Byrne (Peter Finch) being re-elected as the Labour MP for Earnley, a working class Northern town (actually Halifax, according to the Reel Streets website) but to his disappointment he is not given a job in the new government, even as a junior Minister. 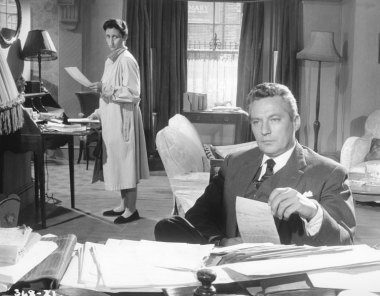 As he returns to this London flat, it is clear that there is no love lost betwen Byrne and his wife Alice (Rosalie Crutchley).  He even remarks at one point "You don't seem very glad to see me" to which she wearily replies "Sorry, can't quite think why I should be" and he adds "And I can't quite remember when you were."  She is certainly to the Left of him (it turns out that in fact she is a Communist Party member) and she accuses him of being a lickspittle, sucking up to the Labour Party right wing to no effect.

Byrne's character begins to be revealed when he attends the House of Commons, as he wheedles his way back into the thoughts of the 'players', and demonstrates to one of the new intake, Henderson (Peter Barkworth) how to operate; he is given a slip saying that one of his constituents wants to speak to him about housing, but in an action he repeats throughout the film, he tells the clerk to tell the woman that he can't find him (Byrne) anywhere. 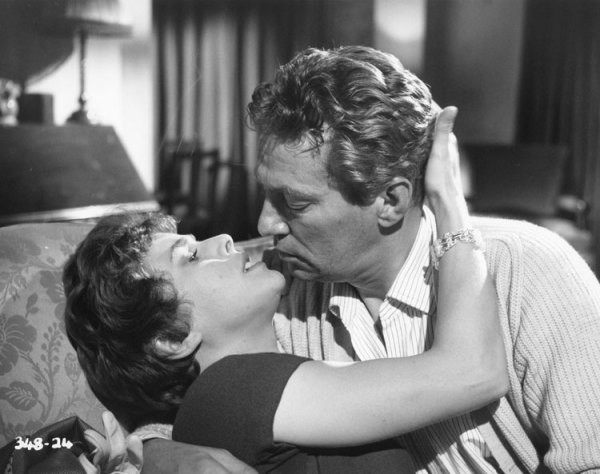 In a fit of angst he roams the mean streets of Westminster, going to a strip show, some bars and even a prostitute, although with the latter, in true News of the World intrepid journalist style, he makes his excuses and leaves before being caught with his trousers down.   Instead he finds solace with Mary (Billie Whitelaw), who lives upstairs and is clearly keen to indulge Byrne's fragle ego; however he shows his true colours when, during a passionate embrace with her the phone rings and he can't resist answering it in case it's the offer of a job in the government, however menial.  Of course, it isn't - in fact it is fellow MP Tim Maxwell (Hugh Burden) trying to get Byrne roped in to a little group of conspirators) -  but the spell has been broken and Mary begins to see Byrne for what he really is. 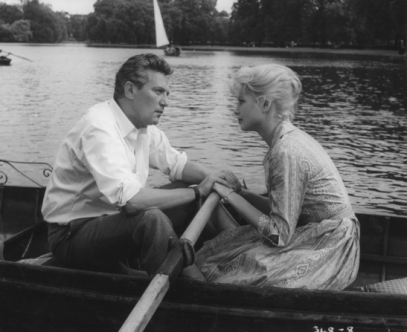 Mary is nothing if not persistent (or naive, depending on your view) and she takes Johnnie to a party hosted by a friend, Sheilah (Fenella Fielding) where, apart from Oliver Reed in an uncredited cameo, he meets 20 year old photographic model Pauline, and soon starts an affair with her.  This plot strand, although a key element of the film, is the one that really drags the film down; the affair seems rather implausible - would an MP, keen to get on and up the greasy pole, really start an affair with a woman that he really has nothing in common with, when he knows that his only chance of careeer success is to play happy families with his wife as a show for the media? - and generally pads the film out unnecessarily.

Far more interesting is his involvement in the little gang of would-be conspirators, led by Mervyn Johns, Hugh Burden and Donald Pleasance; they see their opportunity to create mischief over a foregin policy issue, much to the PM's displeasure, as this scene shows: 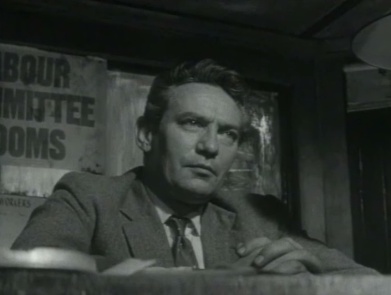 Perhaps inevitably, Byrne lets his fellow awkward squad group down at the key moment, finally seducing Pauline into going to bed with him when he is supposed to be making a nuisance of himself at PM's Question Time.  Whilst he is dealing with the fall out of that escapade, Renfrew (Pleasance) assuring him that he will regret his actions, or rather lack of them, trouble is brewing from other sources; firstly Pauline decides to get herself out of the situation and go back home oop North, but before Byrne can think of a plan, a new problem arises - he is called back to his constituency to attend the monthly meeting (although I would have thought that it would be standard for the MP to attend the Party's monthly meeting, but then Byrne obviously couldn't care less about his constituents or the local Party):

Whilst he is in the North, he seeks out Pauline, but realises himself that the relationship can't work, so tries to go back to Mary, but she also has got tired of waiting to come off the subs bench, at which point Alice, his wife, returns, looking to try one more time to see if the relationship can work; but Johnnie has a choice to make between career and marriage...

One of the most notable points of No Love for Johnnie is the extraordinary number of 'faces' that make often fleeting appearances, some of them uncredited; in addition to those mentioned above, I spotted Norman Rossington as a reporter, Conrad Phillips and Derek Francis as his local party agents, Mona Washbourne as a well-wisher at the train station at the beginning, Gladys Henson, Avis Bunnage and George Rose as party members in the clip above, Peter Sallis, William Mervyn and Ernest Clark as MPs, Dennis Price rather wasted as a photographer, Michael Goodliffe as Pauline's father, and John Blythe as 'man in pub'.  And I can't for the life of me think of the name of the actor who plays the BBC reporter near the start who asks Byrne how he feels about not getting a job in the government - anyone know? 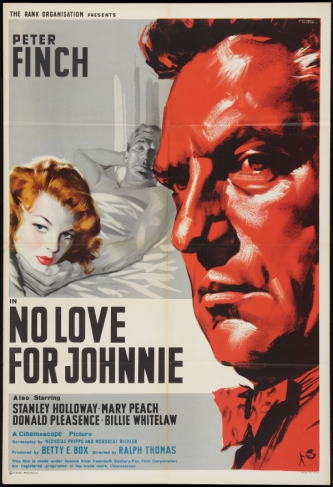 The fascination of watching No Love for Johnnie from a 21st century perspective is how modern it all feels - I suspect that political chicanery was alive and well in the 18th century (indeed in ancient Rome) but in the post-Blair era we are so used to politicians who have no principles but just say and do whatever is the best tactic at the time to 'get on' that it is quite a jolt to realise that this film is more than 50 years old; however it is worth also bearing in mind that Blair couldn't have taught the arch-manipulator Harold Wilson anything, and he was PM less than three years after No Love for Johnnie's release.  It's worth remembering that 'spin' is just the latest name for a practice that is as old as politics itself, as we settle down to almost six weeks of the mind-numbing tedium that is Election 2015.

I'm not a great one for directors really, preferring to focus on script and performances, but in this case I think it worth mentioning that Ralph Thomas (brother of Gerald, director of the Carry Ons) directed, with Betty Box (married to Peter Rogers. producer of the Carry Ons) co-producing.  A nice cosy little world...  What is definitely worth mentioning is that the music is by Malcolm Arnold, and although it is an average score, there are strains there of his vastly superior score for Whistle Down the Wind released a few months later.

Sometimes on TV, the DVD can be bought for less than £6, which is well worth it, especially as it's not on youtube in its entirety as far as I can see.