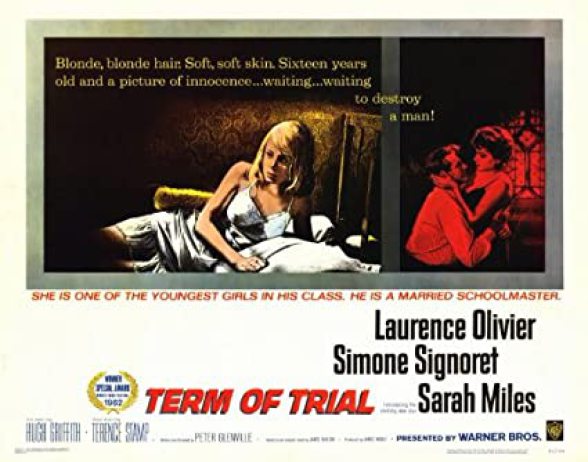 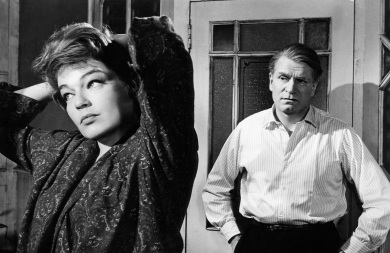 Term of Trial is - despite its stellar cast - another overlooked film from the early 60s period, which very much resonates today due to its subject matter (sexual relations between teacher and pupil) despite the very different handling of the issue then.  Similar in its themes to Serious Charge - discussed elsewhere on this site - it examines the impact on Graham Weir (Olivier), a 50-something schoolteacher, his wife Anna (Simone Signoret) and others of a false accuation made by Shirley Taylor (Sarha Miles, in her film debut), a schoolgirl in Weir's class who becomes infaturated with him.

In mildly awkward fashion the opening scenes sketch out the Weir's situation, not only at work but with his home life; after refusing to serve in World War II he was (presumably briefly) imprisoned, and it is this that has prevented him, despite his honours degree, getting a good job, which interestingly everyone equates with a private school, and the indication is that his role as an English teacher in a tough inner city school, somewhere up North (although the film was actually shot in Dublin,  see https://www.reelstreets.com/films/term-of-trial/ for details of the locations both then and now) is also low paid.  With the deputy headmster (Allan Cuthbertson) moving on, the post is up for grabs and Weir has a good chance of the promotion.

His life at home is not much better, with his wife Anna bitter and frustrated, both at his limited (ie non-existent) ambition and low pay, and at their childless marriage (we learn that she had a miscarriage years ago, she can't have children now and doesn't want to adopt one).

Weir himself is non-violent (in an age when the cane was a regular weapon in school) and a Christian, but has a drink problem due to the stresses of his life. 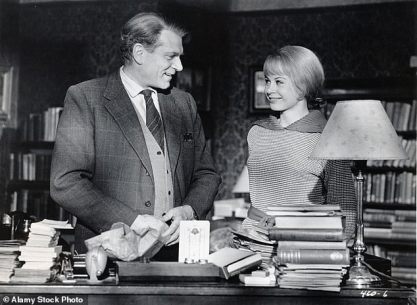 One person who does respect him however is Shirley Taylor (Miles), the swot of the class, who has aspirations to work as a secretary in a plastics factory (it would be easy to laugh at this, but there were very few good opportunities for young working class women then, and most ended up in nearby factories) so therefore needs her English and her letter writing improved.

it's too late to join Weir's night school, so very unwisely he agrees to provide some extra tutoring himself for free (this aspect winning over her parents, Norman Bird and Thora Hird, the latter of whom is particularly distrusting and suspicious of Weir.

This is the very aspect of the film that now jars and appears unrealisitc to modern eyes; is Weir really that naive not to realise what a dangerous game he was playing?  The scenario is not helped by Miles being far too old for the role (at the time of filming she would have been 20, yet Shirley is meant to be just 15 (not quite 16, although interestingly the posters for the film, such as the one above, keep referring to her as being 16 years old).

In a similar fashion the schoolroom trouble maker, Mitchell - it is not clear how old he is meant to be, but although at one point Weir wonders why he is in the class, suggesting that he is a year or two older than the rest, he wouldn't have turned 16 as she would have left school and started work - is played by Terence Stamp, who was 23 at the time!  Mitchell has an undestanble interest in Shirley, although she despies him, but early on in the film he manages to take a photo of her in the toilet - all too easy 60 years on with mobile phones - which leads to Weir having to forgo his non-violent principles in dealing with him: 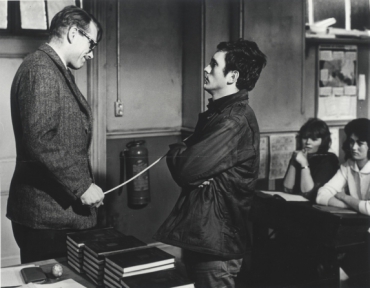 Matters come to a rather inevtiable head when Weir joins his colleague Trowman (Ronald Culver) on a school trip to Paris, which rather improbably Mitchell and his cronies are also going on; given his atttitude to school in general and to Weir in particular (his gets two men to beat Weir up in revenge after getting the cane from him), along with the cost of the trip, it seems very unlikely that he would be allowed to go on the trip even if had wanted to, but there he is all the same.  This is where Weir really shows his naivety; during a visit to the Louvre Shirley pretends to feel a bit faint, but instead of taking her out for some fresh air and then getting her back instead with the rest, Weir takes her for a coffee, buys her a toy dog (15F, apparently about £1), shows her the Eiffel Tower and pretty much spends the whole day with her, without appearing to be questioned by the other teachers as to what they hell he thinks he is playing at.

After this the rest of the Paris trip passes by without incident, but when the group have to stay overnight in a London hotel before returning home, Shirley seizes her chance: 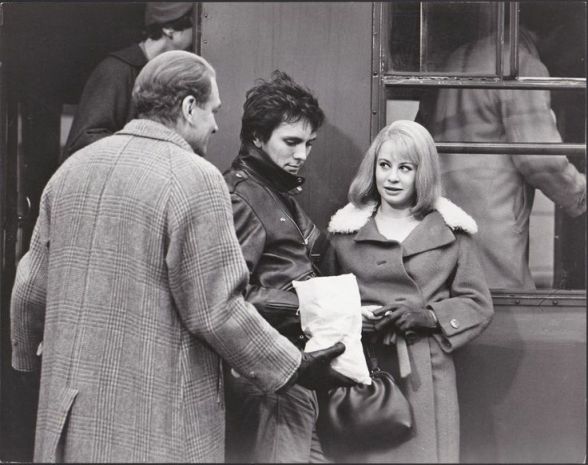 Probably seeing this as the end of the incident, Weir finds, firstly, that the next morning, as they board the train home, Shirley has now thrown in her lot with Mitchell (see above), and Weir sees her snogging him as they block the narrow aisle (so inconsiderate, some people!), but worse is to come a couple of days or so later as the rozzers, in the shape of a snide DS, turns up on his doorstep, tells him he's now the subject of an allegation of indecent sexual assault from Shirley and, in time-honoured fashion, asks him to "accompany him down to the station".

I'm not too much up on police procedure pre-PACE, despite watching endless films like these, but even by the possibly laxer standards of the day this must be the quickest charge in cinema history, as Weir is taken down to the local nick, offered the obligatory cup of tea, asked hardly any questions, and then, after the DS and an Inspector confer for about 5 seconds, is charged and told to appear in court in seven days' time.  Even Regan of The Sweeney would have been proud of that one.  No interview, no soliciitor, there you go mate, see you in court.

Hugh Griffiths plays his defence brief O'Hara, in another unhinged bushy-eyebrowed performance that he seemed to specialise in at the time (see Lucky Jim for example) who makes short work of Shirley in the witness box, but the case if 50-50 and the magistrates decide, on balance, that Weir is guilty of indecent assault (having admitted to patting Shirely on her bottom) but give him a conditional discharge, on the possibly rather flimsy grounds that he has suffered enough.  But Weir has more to say: 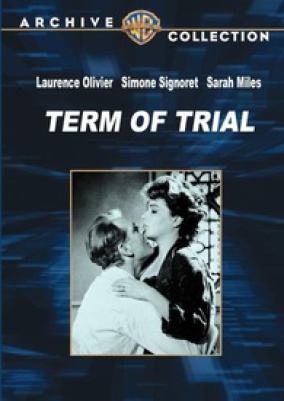 Weir's speech, lambasting society's seeming fascination with salacious imagery and titilation (a previous scene found him wandering the streets, wathcing youths gyrating to a jukebox in a cafe, before pondering a display of what were then referred to as 'girly mags') can be seen as presenting the viewpoint of the view, although his wife later calls it 'mush'.  Things were to get much worse (or, if you are an advociate for free speech and anti-censorhsip, much better) only a few years later, but It is a similar argument to the one still raging today, 60 years on; in fact, it was fascinating to see an article recently - which I'm pretty sure was not in the Daily Mail but in The Guardian - wondering, hypothetically, if Mary Whitehouse might have had a point.

The last couple of scenes are some of the best in the film, as it is clear that both at work - in the shape of the pompous headmaster, played by Frank Pettingell - and at home, things are not just going to go back to normal, and Signoret's character, Anna, has some surprising viewpoints and opinions of her own on the whole situation....

Although the film appears to have been released on DVD (see above right) I can't seem to get hold of it at a sensible price, and somehow I've ended up with two versions, a poor quality version which I must have bought from somewhere like film jems or myrarefilms (see 'Recommended DVDs' page on this website) and another, OKish version which I appear to have downloaded from somewhere, but no idea where now (and the clips on this page come from this second version, they would have been on youtube but they've all been blocked again).   Well worth looking out for if you can get hold of it, or maybe Talking Pictures will show it (if they haven't already dooe so).