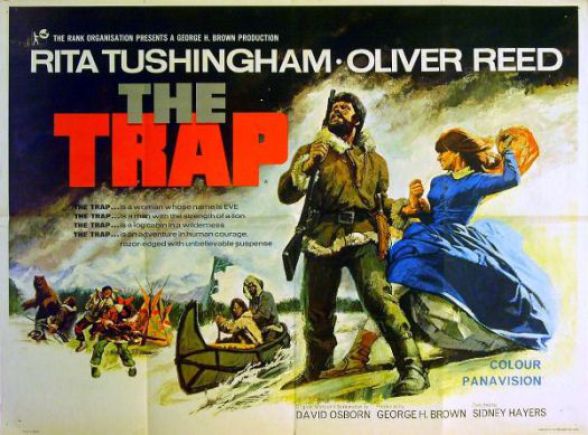 So here's the pitch: Let's make a film set in British Columbia (but shoot some of it in the studio anyway), set in the mid-19th century, about a brutish French-Canadian trapper and his unlikely relationship with a mute young woman.  We can get Oliver Reed to play the trapper, and what about Rita Tushingham to play the young woman?  She'd be perfect, she's known for such roles, having just made films like A Taste of Honey, A Place to Go, The Leather Boys, The Knack...and how to get it, all films er, not set abroad, or in colour, or historical dramas....look we could get Sidney Hayers to direct, he'd be a natural, look at his work on Payroll and This is My Street, both black and white dramas, set in recognisable, tough locations.....OK, it needs some work, we'll get back to you....

Not the sort of film I'd usually watch, as I don't really like travelogue films, nor historical dramas as a rule, I cast my eye over this one as Rita Tushingham was in it, and although I can't pretend that it's my favourite film of hers, nor that it's a great undiscovered gem, I do feel that it's been unfairly forgotten about - it hardly ever gets a mention in Rita's CV - and overall I enjoyed it.  The music helps, a really stirring and memorable score from Ron Goodwin, whose numerous previous credits include Battle of Britain and Where Eagles Dare; here's the theme music played over the credits: 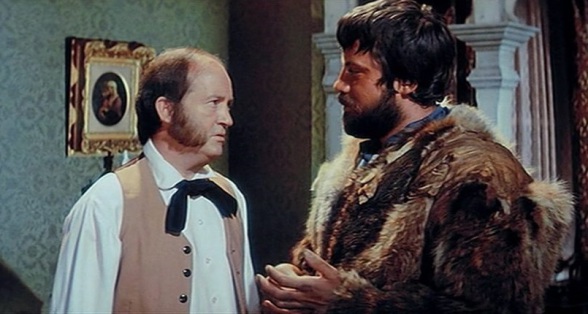 The Trader and The Trapper

The start of the film does pack in a lot of background information in a rather clumsy manner; set in a remote settlement (said, according to reelstreets, to be Bowen Island just west of Vancouver) in British Columbia, possibly in the mid-19th century (well wikipedia says that, I wouldn't have a clue), there is great excitement when the steamer arrives, with suggestions that it only does so once a year.  There are a number of women on board, many of them convicts, waiting to be sold off to the highest bidder as wives.  We are also introduced to a wealthy family (the cast only refers to them as The Trader, The Trader's Wife, and the Trader's Daughter) who have a servant girl, Eve (Rita Tushingham), who doesn't speak, and we are told it's because, 10 years ago, her family were murdered in front of her by Indians (or is that Native Canadians?) and she has been traumatised ever since, with The Trader and his family taking her in.  Although attitudes towards the disabled are perhaps not as enlightened as in our own happy time, this does not seem to have harmed Eve's marital prospects particularly, and there is a young man, in the cast as The Clerk (Blain Farman) as he works in the Trader's store, who is attracted to her, a feeling which seems mutual (just as well, as he seems to be the only eligible man in the whole settlement).

Enter, on his canoe, Jean Le Bete (which even I, with my CSE French Grade 2, can work out translates as 'Jean the Beast'), played by Reed, and in a plot exposition, we learn that two Indians, Yellow Dog and No Name, had led The Trader to believe that Jean was dead.  A brutish figure - but I don't suppose you survived as a trapper in remote Canada at the time if you were genteel and insisted on a doily at mealtimes - he arrives too late to bid for a wife, which irritates him somewhat; but the fact that he is very much alive is bad news for The Trader, as he owes Jean $1000 for furs and skins that he sold to him a couple of years ago, but he has already spent the money (thinking he was dead) so has to pay him off with his own savings.  This does not particularly impress his wife, and as a drunken Jean leaves the house with his money, she comes up with a cunning plan: 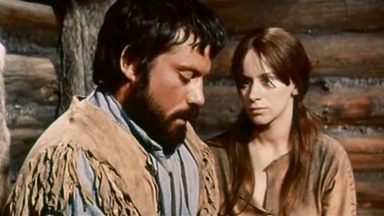 The ill-suited couple head off to Jean's remote log cabin for the winter (surviving a bear attack along the way), but although he is rough and ready, I suspect he is not as rough and ready as a character like him would have been in reality, as Eve fends him off with a knife to stop his advances and they settle into an uneasy truce, Jean showing her how to set traps so that she can help provide for them.  A would-be tender moment, when Jean reminisces about his parents, and starts to play the harmonica, soon turns sour the moment he makes physical contact with Eve, who refuses to allow any such nonsense.  On a hunting trip one day though, Eve gets split up from Jean, and escaping from a cougar, gets back to the cabin, only to find some unwelcome visitors: 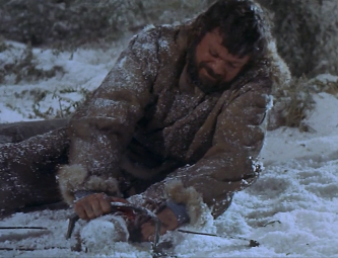 Gone and put my foot in it etc etc

Jean however is too clever for his own good, and one day he manages to get caught in one of his own traps (hence the film title I suppose), badly damaging his foot.  He sends Eve off to the nearest Indian settlement to get help - a four day round trip - but when she arrives the settlement is deserted, the Indians have all moved on, and she has to return, weary and empty handed (although I wonder how she was going to explain what happened, using complex mime techniques?).  Whilst she has been away Jean's condition has been worsening, and it looks like there's only one solution: 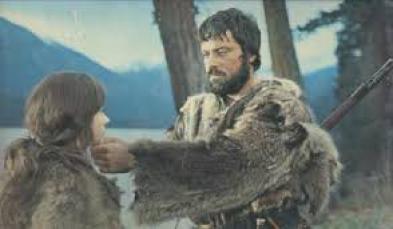 Here's looking at you, kid

Now I'm no medical expert, but I can't help but feel that chopping a man's leg off at the knee, without proper medical supervision, might possibly lead to overwhelming loss of blood and death, but Jean is a tough cookie and he recovers, with what looks like a snow shoe as an improvised leg (!), and the whole episode brings him and Eve much closer, but then she suddenly changes her mind without any great explanation, and leaves him - but things don't quite end there.... 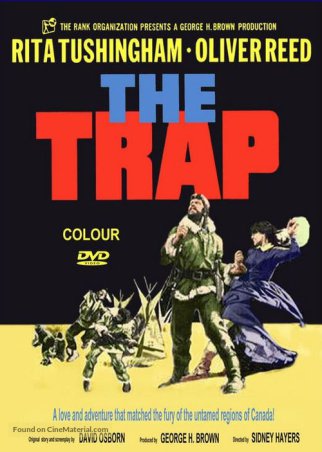 Not seen for many years I believe, the film is now out on DVD, and I bought my copy at the Renown Film Festival in Feb 2018 at the Strawberry Media stall, I think for £4, which was handy as when I later on that day met Rita Tushingham herself - the main reason I'd gone to the festival - she was able to sign the inside cover, so great result all round.

As I don't really understand film making, it's one of those films where I am confused and bemused by the style of shooting, so for example there are lots of 'inserted' shots of animals running off etc, similar to numerous Tarzan films I remember watching as a kid, which clearly come from a library archive somewhere, and even though they shot some of the film on location,  some of the 'outside' scenes appear to have been shot in the studio, and it sometimes suffers badly from that old problem of bad, unrealistic backdrops, especially when Jean at the start, and Eve towards the end, are canoeing down the river.   Nonetheless, still worth lookiing out for, as an oddity of its time if nothing else.

The pic at the top shows Oliver Reed, Barbara Chilcott and Rita Tushingham in an early scene from the film