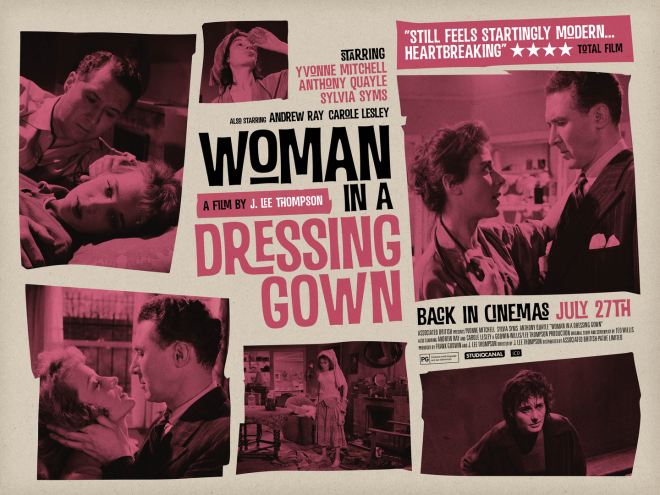 The ultimate kitchen sink drama - in fact the phrase could have been invented for this film - Woman in a Dressing Gown (or WIADG as we in the trade call it) is clearly a filmed play, but still works on a cinematic level; in fact it was a TV play first, written by Ted Willis and inspired by the new natural realism emanating from American TV and films, particularly found in the work of Paddy Chayefsky.  Willis himself has clearly flagged up and acknowleged the debt; in a review of Chayefsky's Marty he wrote:

The main characters are typical rather than exceptional; the situations are easily identifiable by the audience....I am just now becoming aware of this area, this marvellous world of the ordinary.

Of WIADG Willis wrote that he was trying to capture:

...a group of human beings in the grip of a recognisable situation, and their ordinary human reactions to that situation."

and in this aspect the films made from Willis' work have been seen as forerunners of the better-known New Wave films of the early 60s. 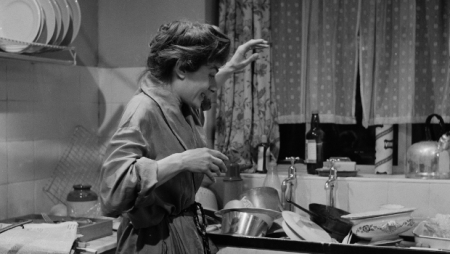 So in WIADG we find basically a four hander; Amy Preston (Yvonne Mitchell, right), her husband Jimbo Preston (Anthony Quayle), their teenage son Brian (Andrew Ray) and 'the other woman' Georgie (Syliva Syms).  Amy is a walking disaster area in terms of her role as a housewife; the flat is a mess, with endless clutter about the place (emphasised by the filming style of director J Lee Thompson, often shooting through the visual clutter).  She is like a child with ADHD, unable to focus on more than one thing at a time, and flitting from cooking to mending hubby's shirt to lighting the fire and back again, achieving nothing.  Her kitchen sink rivals that in Withnail's flat, and the flat is one of those - no doubt common at the time - which have those drying stands or whatever it is they're called, where you dry clothes hanging from the ceiling; my Nan had one in her kitchen and I hated it as when it was too low the clothes got in your face.  Amy is an appalling cook, serving up burnt, greasy food literally swimming in fat, which wisely her husband and son rarely eat anyway.  This opening scene sets out the scenario nicely: 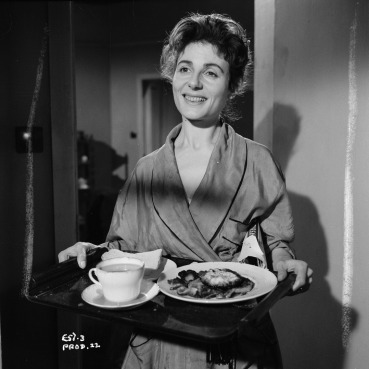 I have recently become fascinated by the minutiae of certain aspects of film; spotting little-known actors who have become familiar to me for example.  My father had two things which he always used to comment on in this respect; one was that when people looked in the phone book for a name and number they always alighted on the one they wanted immediately, the other was that characters in films could always park exactly outside the place they wanted to be, and never had to drive around trying to find a parking space like the rest of us mere mortals.  My obsession at the moment is watching people pretend to eat in films and TV, with 'The Big Bang Theory' currently the worst offender.  Have you noticed that Sheldon, Leonard et al never actually eat anything?  They have very healthy salads, but they simply push the lettuce etc around their plate at the canteen at work, and pretty much the same thing applies at home, as they perch on the edge of the sofa with their plates on their knees, picking at the food but never (apart from the very odd occasion) ever actually putting anything in their mouths.

This is what happens in WIADG, as can be seen from the scene above.  Extremely unappetising though the food is, Jimbo and Brian actually don't eat any of it, or hardly anyway.  Amy prepares bacon and eggs (I think), burnt toast, and an overfilled cup of tea, but I think Jimbo sits down for about 2 minutes (just counted actually, it's 1 minute and 14 seconds) and he's off.  Later in the film Brian does something similar, saying that he has to go somewhere or he'll be late (so why don't you get up earlier, you'll have time then?) 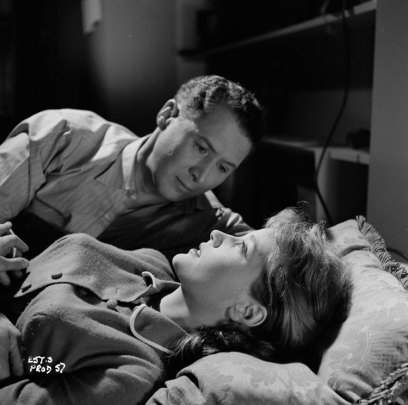 Anyway, I digress.  Sadly, Jimbo is not off for another hard day slaving away for Simpson, he's straight off to see his fancy woman, Georgie, played by the exquistely beautiful Sylvia Syms, whom I may have mentioned in these pages before.  Did I say she was gorgeous and very beautiful?  I think I did. She works at Simpson & Moss, timber merchants, with Jimbo, which is where they met and apparently fell in love.  It is hard to work out what the future might hold for them, as we never get any closer to Georgie as a character, only that she is the disruptive agent as my old mate Vladimir Propp might say.  For Jimbo the attraction is obvious; a beautiful woman, 20 years younger (for once the casting is right; Qualyle would have been 44 at the time of the film, Syms 23, with Mitchell 42), who is assured, very presentable (always immaculate in her appearance and clothes) and what we would now call a 'trophy wife'.  What we are less sure of is whether this is the right move for Georgie - would she really go for a man like Jimbo, 20 years her senior, ignoring all the men her own age, without even the obvious attractions like money to compensate?  When we first see her, with Jimbo (although she only ever calls him 'Preston', bit like only ever calling Stephen Patrick 'Morrissey' I suppose) in her flat, she is putting pressure on him to tell Amy that he is going to leave her.  That evening Jimbo tries half-heartedly, but the moment never arises, and on the Monday morning there is clear tension between the two at work: 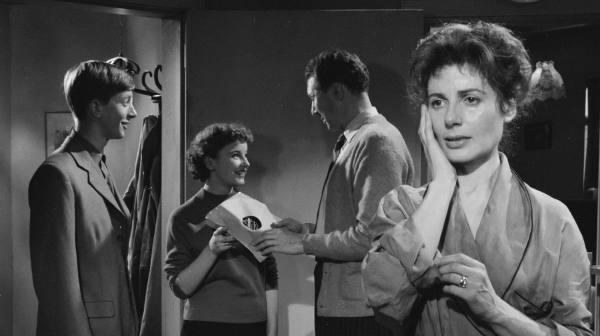 Finally, on the Monday night, Jimbo tells Amy that he wants a divorce (I supsect that what finally does it for him is that Amy serves up a particularly unappetisiing meal, involving 'crispy' chips)' although inevitably they are interrupted when Brian comes back with his girlfirend Christine (above) and, unaware that there are bad vibes in the air, ploughs on gamely and plays their new jazz record, in a scene mildly reminiscent of that bit in Brief Encounter when that interfering busy-body neighbour of Celia Johnson's intrudes on her last moments with Trevor Howard.  The moment passes, but at least Jimbo has put the situation 'out there', and the next day Amy decides to have a confrontation with the three of them, asking that Georgie comes over to discuss it all like adults.  She plans to try and win Jimbo back by gettting her hair done, laying the table out nicely, buying some whisky for him, wearing her best dress, and so forth, but events conspire against her (her hair is ruined when she is caught in the most sudden downpour in film history; when she goes in a shop it is reasonably sunny, when she comes out less than two minutes later it's chucking it down) and by the time her son finds her she is on the floor, pissed, still in her trademark shabby dressing gown and with everything upset and strewn on the floor.

She recovers herself though, and even manages to fight back and show some backbone, as the three of them talk it through:

I think the ending is quite a cop out, with no real reason for Jimbo to change his mind over Georgie; having got the worst of it over he then seems to just give in (he is clearly a weak character, whereas Amy is shown to have hidden depths) and although the film has a happy ending of sorts it doesn't feel like that now.  Wil Amy really change?  It seems highly unlikely.  Georgie will clearly find another job (very easy in those days) and move on and find someone else, so surely it's back to square one for the Preston family?  I suspect this is one of those films where one's viewpoint and reaction depends partly on the gender of the viewer and also (perhaps more so) on when the film is being viewed.  Nearly 60 years on, an audience today would surely take a different view of things than a contemporary audience, who presumably would have found nothing odd or strange in Jimbo coming in and expecting everything to be done for him, including his shirts ironed etc. Nowadays our attitude is much more 'if you want a shirt ready, for Chrissake iron it yourself' and quite rightly so. 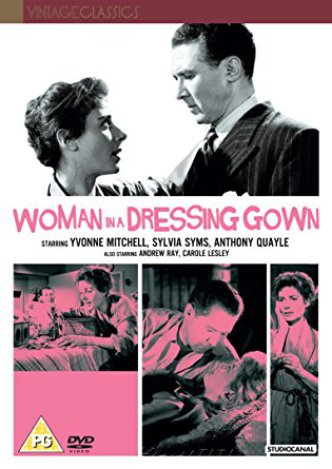 The DVD is available for about £9-10, and contains a 20 minute piece from my ex-tutor Melanie Williams, whose Phd was on the representation of women in the 50s films of J Lee Thompson, so she knows her stuff.  Part of her research involved finding out reactions to the film at the time, and it was interesting to see how many women then took it almost as a cautionary tale ie see what happens if you slouch about in a shabby old dressing gown until all hours and don't have the dinner ready when he comes home?  I particuarly liked the comment from one contemporary viewer who said 'It's done for dressing gowns what Psycho did for showers' although I wonder when that comment was made as Psycho was not for another three years...

Finally I should mention, as I haven't done so yet, that the film is particularly distinguished by a brilliant performance by Yvonne Mitchell, who turns Amy from an extremely annoying woman into someone who finds her voice, enough so to make you think that it's perhaps her that should be leaving the useless, weak Jimbo behind; although then you remember that it's only her that calls him Jimbo in the first place, and when she puts the radio on again at the end and gives her gormless grin you start having doubts all over again.  A remarkably fine actress, at the the height of her powers at this time.