THE BRITISH B MOVIE 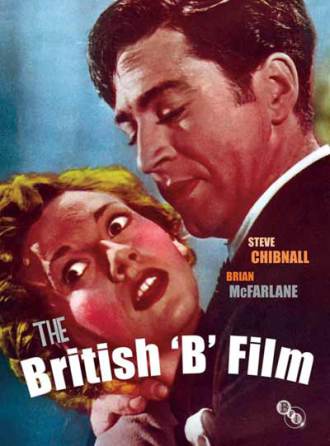 The British B Film', written by Steve Chibnall and Brian McFarlane and published in 2009, was the culmination of the upsurge of interest in British second features in recent years.  With companies like Network on Air, Renown films and Odeon Entertainment scouring the back catalogues of studios such as Merton Park and Butcher's, it has become easier than ever to see the films that for so long have been unseen and therefore forgotten.

A few years ago (2008 to be exact) Matthew Sweet, who has done as much as anyone to rekindle interest in this aspect of British film production, made a marvellous and hilarious documentary on the British B-movie BBC Four, although it looks across the board at all types of B movies from the quota quickies (see below) of the 1930s through to the science fiction, horror and teenage beat films of the 1950s and on into the sexploitation  fillers of the late 60s and 70s, whereas this page focuses only on the B movie crime and thriller films of the period, and if I have any moans about Sweet's film it's that people coming new to this type of film would take away the view that most were cheap, shoddy 'genre' films of the likes of Konga, Trog and Devil Girls of Mars rather than the steady flow of good quality crime film productions.  Mind you, I sill love the comparison of The Black Rider with The Wild One, along with Mark Gatiss' analysis of the role of Jimmy Hanley's arse in the former.

So what exactly was the B-movie?  The 1927 Cinematograph Films Act, in a bid to stem the flow of American films threatening to swamp the home market, created the conditions for what came disparagingly to be known as the 'quota quickies', British films made as cheaply as possible safe in the knowledge that they would be guaranteed exhibition and presumably an audience, although in the worst scenarios they were shown in the mornings, whilst the cleaners were still working, just to fit the letter if not the spirit of the law.

They were however a very useful training ground for future actors, directors and technicians, and this continued after the war, with small independent companies, such as Danziger, Butchers', Tempean, Anglo-Amalgamted, along with many others, seeking to fill that gap in the market and meet the needs of the public who still expected to get a full programme of films for the evening.

Here are just a small percentage of the titles that filmgoers could see with the main feature - many now are course are put as double bills now on DVD: 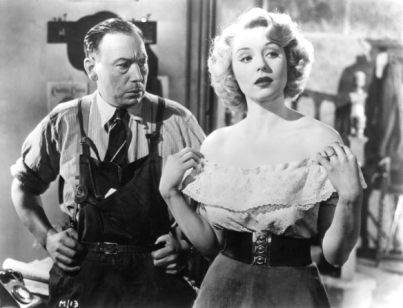 Marilyn (Sandra Dorne) preens herself whilst Leslie Dwyer looks on

This continued throughout the 1950s, as audiences still wanted the full programme, with the phrase 'What''s on with it?' often being heard.  But as television became more popular, and Hollywood in particular fought back with sumptuous colour films in panoramic vision (along with 3-D, Smell-o-Vision and no doubt Supermarionation as well to lure the audiences back), the poor old B movie was being squeezed on both sides.  Nevertheless there was still a steady niche for the 1 hour potboiler, one of the most interesting of which was Marilyn (right, known in the States as Roadhouse Girl, a better title to be fair), made in 1953 and specifically discussed in Sweet's film:

There was a brief boost for the B feature production world right at the end of the 1950s, with the government delivering on its promise to channel Eady Levy money (ie money from ticket sales distributed back to British film producers) into production, coupled with the collapse of the US B movie market which meant there were gaps there that British films could exploit, particularly those with US and Canadian leads which made it easier to promote such films in the States.

It was an Indian summer, to use Chibnall and McFarlane's phrase, rather than a new dawn, although many of the best B features were made in this short 4-5 years period, including the excellent Edgar Wallace Mysteries, discussed in more detail elsewhere on this website so I won't go into them here.

Television was taking over the role of nurturing and grooming new talent, both in front of and behind the camera, and production costs for second features were proving prohibitive as they could not be recouped and almost all productions were losing money.  By 1965, when all main features were being made in colour anyway, B movie production was effectively dead.

Some leading B men 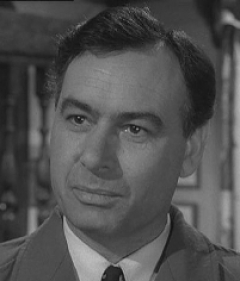 Conrad Phillips (born 1925) made his name as William Tell on the telly in the late 1950s, but also appeared in films such as Heavens Above! and No Love for Johnnie.  His main leading roles though were in B features such as Witness in the Dark (1959), directed by Wolf Rilla, The Desperate Man in the same year, and Impact (1963).

I remember him particularly as Mr Lloyd in 'The Wedding Party' episode of Fawlty Towers in 1975, but he retired due to severe back pain.

Recommended B movie: Witness in the Dark (1959) 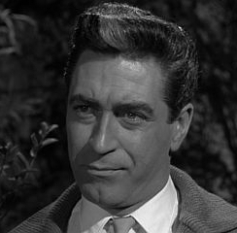 Dermot Walsh (1924 - 2002) was an Irish actor of stage and screen, born in Dublin, who played  the titular character in the TV series 'Richard the Lionheart' in the early 60s.  He was in 40s films such as The Mark of Cain, Hungry Hill and Jassy,  going on to make numerous B films in the 1950s and beyond.

Married to Hazel Court (see below), he starred with her in films such as Undercover Agent (1953) and also alongside Rona Anderson (see below) and many others.

Recommended B movie:  The Frightened Man (1952) 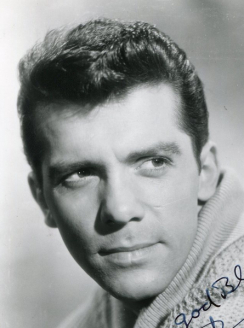 Lee Patterson (1929 - 2007) was a Canadian who, along with fellow Canadian Paul Carpenter and numerous American actors, made an impact in British films due to their nationality (having American/Canadian names in second features helped sell the films abroad).

Usually in virile, action roles, Patterson played the lead in crime dramas such as Cat and Mouse (1958), where he played an army deserter, The White Trap (1959) and Breakout (1959) with Hazel Court (see below) before moving back across the water where he lived in the US and appeared in countless TV series and shows.

Some leading B women 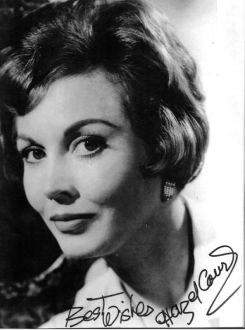 Hazel Court (1926 -2008) was one of the graduates of the Rank organisation's 'Charm School', and was married to Dermot Walsh (see below) from 1949 to 1963.  She appeared in films such as Dear Murderer (1947) with Eric Portman, and also in legendary cult film Devil Girls from Mars.  She moved into mainly B movies with films such as Behind the Headlines (1956) and Hour of Decision (1957).

She also featured in a number of horror films, including The Curse of Frankenstein (1957), and worked on both side of the Atlantic, on TV and in film, before moving to the States permanently in the early 1960s. 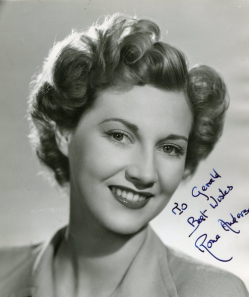 Rona Anderson (1926 - 2013) was a Scottish actress who married Gordon Jackson in 1951.  Although she also worked on stage and on TV, she made many appearances in B movies and genre pictures from the early 50s onwards, such as Home to Danger (1951) with Stanley Baker, directed by Terence Fisher, along with A pictures such as Noose for a Lady (1953), a standard crime detection thriller, alongside Dennis Price.

Anderson wrote the foreword for Chibnall and McFarlane's book in Feb 2009, ending with the comment "Looking back, I think what a great lark it was - and what a great life." 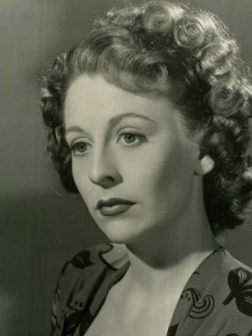 Jane Hylton (1927 - 1979) was another actress from the Rank Charm School, in reasonably prominent roles in 40s main features such as It Always Rains on Sunday, Passport to Pimlico, My Brother's Keeper and Daybreak.   She found regular work in the 1950s in B features, such as The Tall Headlines (1952), Secret Venture (1955) and Violent Moment (1959), Sidney Hayes' directorial debut.

One of her best later roles was in the creepy and unusual House of Mystery (1961), which can be seen as an extra in the box set The Edgar Wallace Mysteries.  She also played Betty's mother in the TV series 'Some Mothers do 'ave 'em'.  Sadly she had been diagnosed with a heart defect and she died aged only 51 from a heart attack.

I have seen only a fraction of the B movies made in the 1950s and early 1960s, and here are just a small selection of them, with some famous names featuring from time to time, although many of the actors and actresses give rise to the old 'Oh, that's old what's'isname, you know, did that film with whoisit, you know, what was it called now'?

It is the unspoken assumptions about daily life in Britain that I especially like about these films, everything from getaway cars parked outside banks and jewellers without being bothered and then being unhindered by traffic as they make their escape, even in the centre of London, to the extraordinary amounts of alcohol being drunk at all times of the day or night - the middle and upper classes being "almost incapable of entering a living room without crossing straight to the drinks cabinet", in Chibnall and McFarlane's memorable phrase - often followed, rather worringly, by said characters unthinkingly getting in their cars to drive home.  It is this connection to the social history which they reveal which Matthew Sweet highlights in 'Truly, Madly, Cheaply!', with added comments from Melanie Williams, my ex-tutor who is now at the University of East Anglia:

The Bs finished on a high though; of the 15 superior second features that Chibnall and McFarlane highlight in their last chapter, almost half of them were released between 1960 and 1964, including The Impersonator with John Crawford, Tomorrow at Ten with John Gregson pitting his wits against kidnapper Robert Shaw, Smokescreen with Peter Vaughan as an insurance investigator involved in murder on location in Brighton, and the suspense drama Cash on Demand, (see below) featuring two excellent performances from Andre Morell and Peter Cushing as a suave bank robber and a pressurised bank manager respectively. 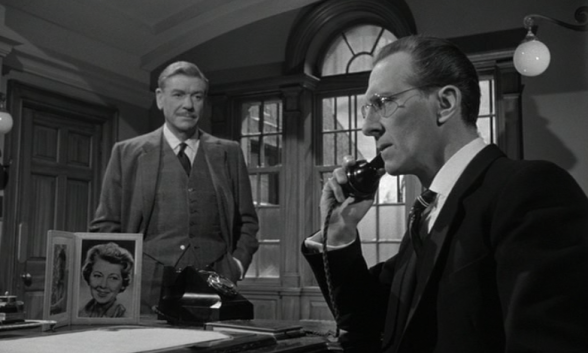 There is so much to be said about British B movies, but like them i should not outstay my welcome, as this is just a taster of their myriad pleasures.