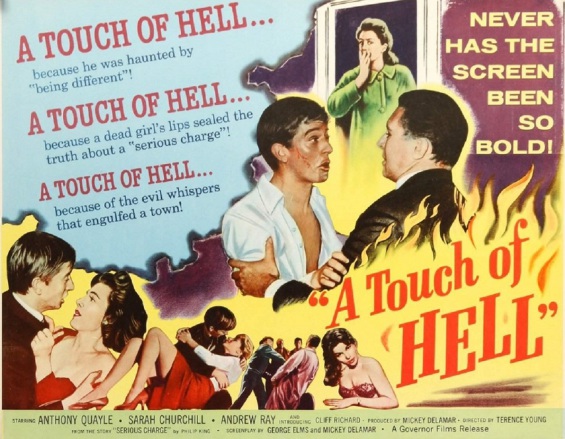 Serious Charge or, as the poster above says, A Touch of Hell, seems to recommend itself now mainly as the film that first introduced Cliff Richard on screen, but in fact he makes only fleeting appearances, and it is much more interesting now as an early (late 50s) example of a bold new look at an emerging social problem, in this case that of a prominent professional person (here, a vicar) accused of sexual misconduct.  Anthony Quayle plays Reverend Howard Phillips, new to the town of Bellington (actually Stevenage, or the old town part anyway, see www.reelstreets.com for the usual 'then' and 'now' shots of the film's location), having moved in to the vicarage with his mother, played by Irene Browne (last seen by me playing Moira Shearer's pushy mother in The Red Shoes).  Phillips is a man's man, 'in with the kids', having previously been a padre in the parachute regiment, presumably during the war, and also - although I didn't really understand the references here, as it seemed so unlikely, if not absurd - a professional footballer in his spare time. 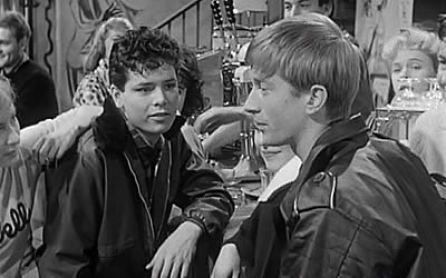 Along with his usual responsibilities, Phillips seems to have taken on a pastoral role in relation to Curley Thompson (Richard, right) who has got himself into bother at the juvenile court, presumably in an attempt to emulate his older brother Larry (Andrew Ray, also right) who, despite his fresh-faced appearance, is a nasty piece of work for whom the town is 'Squaresville' (at the start of the film he makes a square symbol in the air, to signify that everyone is a 'square', but which now appears to indicate that he is going to check the VAR system to review a refereeing decision), and whom we have already seen treating his girlfriend Mary (Leigh Madison) with ill-concealed disdain.  In fact he takes steps to avoid her when she comes in to the local cafe looking for him, yet he fancies his chances with new girl Michelle (Liliane Brousse, a French actress; this seems to have been her only British film appearance) who happens to be the new general dogsbody at the vicarage across the way.

The first scene in the cafe is a glorious one for those of us who delight in the camp absurdities of 'youth speak' at the time, and it inevitably reminded me of the non-existent film classic Keep Your Hair On, Daddio, wonderfully portrayed in the little-seen Harry Enfield spoof documentary 'Sir Norbert Smith: a Life'  back in the late 80s:

Phillips' other main problem, although he hasn't realised it yet, is that he took over the role of vicar - the vicarship? - from the elderly Rev Peters (Noel Howlett) who lived at the vicarage with his daughter, 30 year old Hester Peters, who is every inch the clergyman's daughter as described in the novel by George Orwell; a frustrated spinster (her own description of herself), forever involving herself in good works but secretly bored with it all, and who has got her eye on the bachelor Phillips.  Hester is played by Sarah Churchill, who I haven't seen in any other films, but whom a little bit of research revealed to be none other than the second daughter of Winston Churchill and who was later to become Baroness Audley.  In this scene she finds Phillips distracted by two young boxers as she tries to interest him in the parish magazine, but he soon has a more pressing problem to deal with (look out for an uncredited Jess Conrad, 'wielding a bicycle chain', as Morrissey would have put it):

When Phillips meet Mary (below), Larry's girlfirend, in the High Street one day, it's clear that she is very upset, so he asks her to come round and talk things over, and she soon admits that she is pregnant and that Larry is the father, although he doesn't know it yet.  Managing to calm her down, and look at the situation more rationally, he agrees to go round to her house that evening to talk things over with her father. 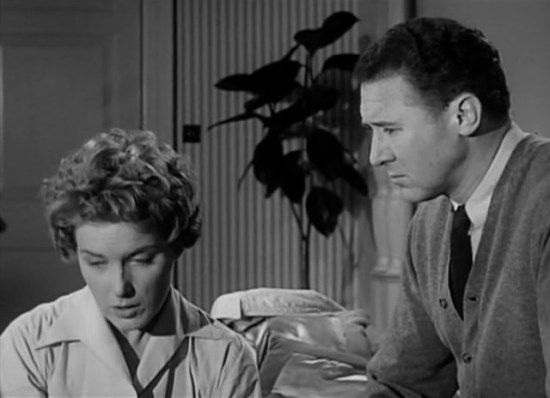 As someone else (Hester, as it turns out) then rings the front door he suggests she leaves by the back door, but she is seen by Hester, who chooses this evening to try and seduce Phillips, who, taken aback by this - to him - surprise declaration of love, rejects her.  Hester then adds two and two together and makes five, believing that Phillips is rejecting her because he is having an affair with another woman (hence her leaving by the back door).

That evening, in the only false melodramatic note in the film, Hester, as she is walking home after leaving the vicarage, sees Larry with Michelle, kissing in a bus stop and, backing away in despair, gets herself knocked down and killed.  Phillips blames Larry - somewhat unfairly, it has to be said - for Mary's death, and decides to tell him a few home truths, a decision he will come to regret:

Hester Peters' arrival on the scene is fortuitous for Larry - and very unfortunate for Phillips - as in the usual way of things Larry would probably soon have to admit that he was lying, but as both Larry's father (Percy Herbert), who regularly takes his belt to his sons, seeks answers, and the local bobby sticks his size 12s in to little effect (these days of course one would be arrested immediately and witness statements taken), Hester's role in the incident becomes of key importance: Larry Thompson is hardly a credible witness, but the ex-vicar's daughter has impeccable credentials, and a word from her would surely end the case, but she has a score to settle with Phillips and her refusal to get him off the hook leads the townsfolk, as they are always called, to draw their own, ill-informed conclusions:

The film purports to show a 'happy' ending, but I'm not so sure, and in any case there are different 'readings' possible of what would, in such a scenario, constitute a happy ending; one thing that is evident however is that Phillips has been deeply scarred by his experiences, and although encouraged to forgive, if not forget, by the ex-Rev Peters, it is certainly not apparent that he is able, or willing, to do so. 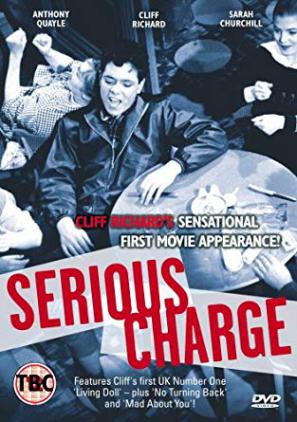 The DVD cover (right) shows how the film has been marketed; Cliff Richard's name appears in red in the middle of the cover, and in the centre of three at the top, with the cover suggesting that the film features three numbers by him (hardly, he sings a snippet of three songs) when he is only a minor character in the film.  Poor old Andrew Ray (sounds like the start of a song, that) doesnt' even get a mention...

Amazon seem to have completely taken over the DVD market these days, I'm sure I got my copy from somewhere like Network on Air or Strawberry Media, and rather cheaper than Amazon have it priced at (about £9-10) but such is life.  If you are looking for a 'sensational' movie appearance from Master Richard you are likely to be disappointed, but if you're on the look out for a well-crafted, serious film that looks at an issue that is of course even more topical and relevant now than it was at the time, then this is for you.