Nell Dunn was an upper-class woman who went 'slumming' in Battersea in 1959 and wrote a series of sketches (sketches being a much more appropriate term than short stories) which were published in 1963 (my copy has the cover on the left above) as 'Up the Junction'.  Four of the pieces were published in The New Statesman.

The stories mainly revolve around three working-class women, sisters Sylvie and Rube and an unnamed narrator.  The first story, 'Out with the Girls', begins:

We stand, the three of us, me, Sylvie and Rube, pressed up against the saloon door, brown ales clutched in our hands.  Rube, neck stiff so as not to shake her beehive, stares sultrily round the packed pub.  Sylvie eyes the boy hunched over the mike and shifts her gaze down to her breasts snug in her new pink jumper.  'Kiss! Kiss! Kiss!' he screams.  Three blokes beckon us over to their table.

Rube doubles up with laughter.  'Come on, then.  They can buy us some beer.'

Dignified, the three of us squeeze between tables and sit ourselves, knees tight together, daintily on the chairs. 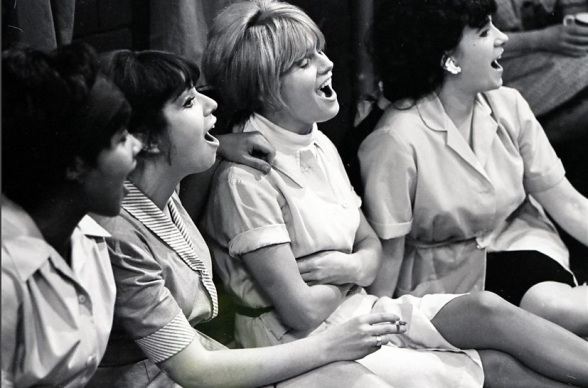 The first version of 'Up the Junction' was of course Ken Loach and Tony Garnett's filming of the book for the Play for Today strand in 1965, with Carol White as Sylvie, Geraldine Sherman as Rube and Vickery Turner as Eileen, presumably the unnamed narrator of the book.

Loach directs it in typical cine-verite style, almost like a documentary, with much of the dialogue lifted straight from the book (the book is really just a series of snatched conversations,  presumably overheard and noted by Dunn over the 3-4 years she lived in Battersea, so it lends itself very well to this kind of filming). 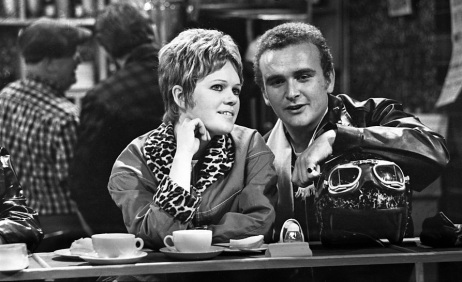 There are only really three key incidents or situations in the book which are faithfully recorded by Loach in the TV version; the infamous abortion scene, Terry's death in a motorbike accident, and Dave (Tony Selby) going to prison for four years.  The first two are retained in the film version, but there is no Dave in the film, although there is a similar ending. 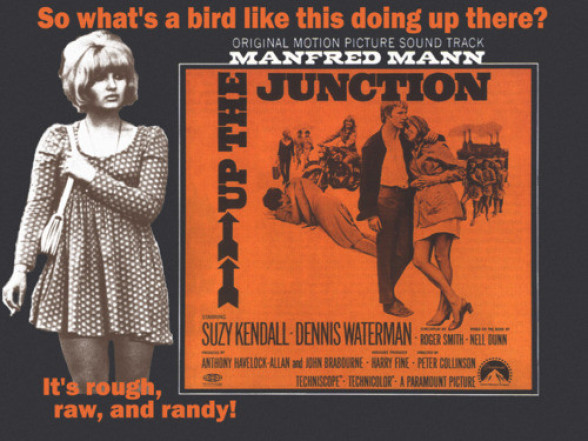 The film came out a couple of years later, in 1967, directed by Peter Collinson (who went on to direct The Italian Job) but the cast has been completely changed, and noticeably the script is by Roger Smith (no idea of his antecedents), not Dunn herself.  The whole style of the film has changed totally, including the music, with a new song written and performed by Manfred Mann just for the film: 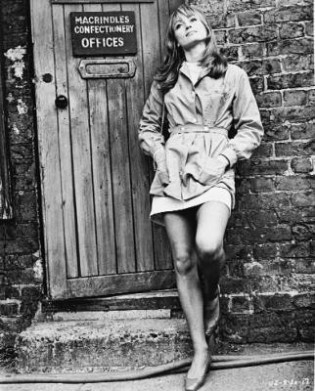 Suzy Kendall plays Polly, an upper class girl from Chelsea who deliberately sets out (much like Nell Dunn?) to live amongst the impoverished working-class in Battersea, as seen at the start of the scene above.  In this respect she replaces the silent narrator of the book (and Eileen in the TV play) and thereby brings a new element, as in the book the narrator is clearly from the same background as those she observes.

Polly gets a job at the factory where she meets Sylvie and Rube (now played by Maureen Lipman and Adrienne Posta respectively) and immediately settles in to her new life (I have always thought this very unlikely; would rough women in a factory really readily accept a posh girl turning up to work there, without being suspicious of her motives?)

The introduction of a new character,Peter (played, in pre-Sweeney days, by Dennis Waterman), who becomes Polly's boyfriend, radically alters the viewpoint of the film compared to the book, as we now have someone who takes a critical stance on the world of Sylvie and Rube, unlike Polly who seems to be a complete innocent abroad. They meet when Polly is looking for furniture for her new flat, but it soon becomes clear that whilst he wants to treat her to the high life, she wants nothing more than to get away from it all and experience the raw street life of Battersea, as when she persuades Peter that all she wants to do on Saturday night is just walk around:

The book was praised for its lack of moralising over the sometimes shocking (at the time) lifestyle of its protagonists, as for example when Sylive runs into her ex-husband in the street one night:

Now the stars are out as we turn into Reform Street.  A crowd of them tumble out of the bright doorway of a house and among them is Ted and he sees Sylvie and he stands cocky and arrogant among his friends. 'Where d'you think you're going all dressed up like the Queen of Sheba?'

'What's that to you - you fifth-rate ponce?'

They face each other in the gentle air.  Everyone is quiet and Ted staggers and quivers with drink and rage. 'You ferkin' whore, I know you had that abortion round the corner for ten quid, I can prove it!'

Sylvie goes for him.  He hits her, she screams in anger and someone tries to pull her back.  He hits her again and she falls down. 'You ferkin' brute and you don't give nothin' to your son!'

'I give him two shirts!'

[Sylvie and Rube's mother turns up, as do the police]

Down the hill glides a police car and the crowd melts into the shadows.  Four men jump out.

'It was nothing, Inspector.  Come on, we're just on our way home!'

'What are you doing in yer night-dress, Mother?'  The Inspector grins after us as we troop up the warm road.

Sylvie pushes her blonde hair back behind her ear.

This scene is played very faithfully in the TV version, and it reappears in the film, but the difference now is that we view it not only through Polly's eyes, but also through Peter's, with his contemptuous "Seen enough?":

The abortion scene is retained, as one might expect; in the book this chapter is called 'Bang on the Common' (not what you think, it refers to the location of the house where Winny, the abortionist lives):

Winny was about forty-five. She wore a red dress above her knees showing her varicose-vein legs, ankle socks and gym shoes...She had delicate arms and huge bony hands with long red fingers which she waved around.

'I know why you've come - there's only one reason good-looking girls come to see Winny.  Here, Annie, pop across the off-licence and get me a quarter-bottle whiskey.'  She gave her a ten-shilling note and Rube and I were left along with Winny.

Winny poked Rube in the stomach. 'Oh, then you've only got a small problem in there.'

'Don't try and explain, love.  How can you ever explain anything?  It's the most bloody impossible thing in the world.  How much money have you got?'

'Give it over.  You don't look more then seventeen.'

'Come on upstairs, then your friend can wait for you down here.'

In the film Winny is played by Hylda Baker with grotesque relish, reprising her role in Saturday Night and Sunday Morning:

Peter in the dock at the end of the film

The book's focus on the trial and imprisonment of Dave, the narrator's boyfriend, is replaced in the film at the end by Peter stealing a car to take Polly away for the weekend, a rather unsatisfactory end but there is no doubt that the film makers had a problem in resolving the narrative, as the book (and TV play) doesn't 'end' as such, the penultimate chapter ends:

Evening and the girls wear cotton dresses showing teenage knees and loll against the off-licences eating fish and chips as we go by.  The dogs snuff the dehoused rats in the latest demolished terraces.  He [Barny, the Tally Man] drops me off.  On the corner a group of jean-boys are gathered round bicycles and scooters hoisting Coca-Cola bottles to their lips, and all the chimneys of Battersea are reaching to the sky and puffing mauve clouds into the cloudless summer evening. 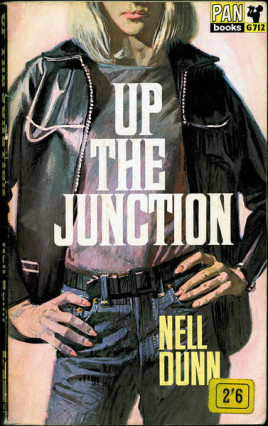 You can buy the DVD of Up the Junction pretty cheaply - about £5 or so now - and I got my 1966 copy of the book from abebooks.co.uk, where it can be bought for less than £3 including p&p; it's only just over 100 pages long, but the problem I found with it was that it was difficult to work out the different characters, and the fact that most of it is dialogue means that it reads at times like a film script, which is probably why the TV play version is so successful at bringing Dunn's world to life.

The TV version is availabe on a BBC box set called 'Ken Loach at the BBC' for less than £20, and it also has famous works such as 'Cathy Come Home', 'Days of Hope', 'The Big Flame' as well as lesser known TV plays like 'Three Clear Sundays' which are usually pretty good, so well worth checking out.