The poster for this sequel is rather less inspiring than its famous predecessor - 'A savage story of lust and ambition', ran the famous tagline for Room at the Top - and in a similar fashion the film itself, whilst it always holds the attention, is somewhat less compelling than the earlier film, as is so often the case.  This was a time when sequels were rarely thought of - that was something that came along in the next decade, with films like The Godfather and The French Connection - although it seems odd to us now; something works well, made a lot of money - let's make it again! 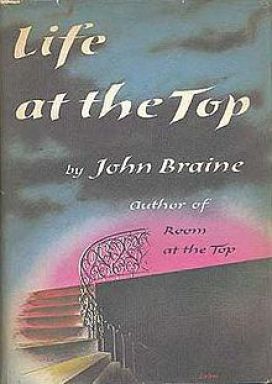 The thought obviously occurred to John Braine, who wrote both novels.  After the huge success of Room at the Top, published in 1957 (and set ten years earlier), his second novel, The Vodi (which I've not read) was a commercial failure, so (probably encouraged by his publishers) he returned to his theme in Life at the Top, published in 1962, this time set 10 years on from the first novel, ie set in 1957.  The cover opposite, like most of the covers for the book, refers of course to 'the author of Life at the Top' (even the poster at the top refers to him twice in the same vein); like Orson Welles, Braine started at the top and worked his way down.

It was - and still is - a point often missed when referring to Room at the Top that although it started off the 'kitchen sink' films of the late 50s and early 60s, with its themes of 'working class boy makes good', consumerism in the affluent society etc, it was actually set right in the middle of austerity Britain, and in the same way Life at the Top, whilst released in 1965, (Swinging Sixties and all that) is actually set in 1957.  Only a few weeks ago, as it was being shown on Talking Pictures TV, the Radio Times mildly criticised the film for failing to catch the mood of Swinging London; a bit like moaning that a film set in the jazz clubs of the Roaring Twenties fails to sense the mood of the Jarrow March. 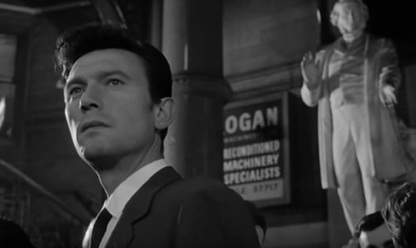 Anyway, the film again follows the fortunes of Joe Lampton (Laurence Harvey reprising his role of course), who in the earlier book and film had married the boss's daughter Susan Brown, after his affair with Alice Aisgill had come to an abrupt end after she had killed herself (or as good as).  We return, 10 years on (in the first film Susan is pregnant, in Life at the Top their son, Harry, has his 10th birthday) to find Joe married to Susan, with two children, Harry and Barbara (4), working at AZ Brown's as before, but without a seat on the top table and looking like he is going to be frozen out as the company looks to go public and merge with a rival, Hethersett's.  The biggest problem for me with the film is that Susan is now played not by Heather Sears, but by Jean Simmons; first of all this take a leap of faith, to accept a different actress in the role (I'd like to know why Sears didn't play the role again, but can't find anything on the topic, other than a suggestion that she was too busy raising three children) and secondly, I always felt that Susan was meant to be rather mousey and, although pretty, nothing special and certainly not someone that a person like Joe Lampton would choose to settle down with; Jean Simmons however was a noted beauty who, in her mid-30s when the film was made, exuded sensuality and experience, however much she tries to play it down to fit the part ("your empty headed little wife").   The other characters (Abe Brown, Susan's father, Mrs Brown, her mother, and George Aisgill) are all played by the same actors (Donald Wolfit, Ambrosine Phillpotts and Allan Cuthbertson respectively) although I was convinced that the actress playing Mrs Brown had changed, only imdb have confirmed that this is not the case.

The key story line centres around Joe's roving eye, as before; in Abe Brown's rather uncharitable comment: "Who's the whore this time?"  Well, it's Honor Blackman as Norah Hauxley, a TV reporter (anchorwoman) who is, somewhat unplausibly to be honest, in the north (Warley again, the fictional name for Halifax) for a few weeks or so making some TV programmes.  She makes no bones about her view of the North, and her desire to get back to that there London; when Joe asks her, at his father's Sunday morning sherry party (!), what she's doing in the area, she replies "Anything I can to work my passage out of the salt mines and back to London", and when he protests that it's not that bad, she replies, caustically "Not if you're a vegetable".  This time, however, Joe is not going to have it all his own way; his friend Mark (Michael Craig) thinks like him - have an affair, why not? - only it hasn't occurred to Joe that he might be on the receiving end for once: 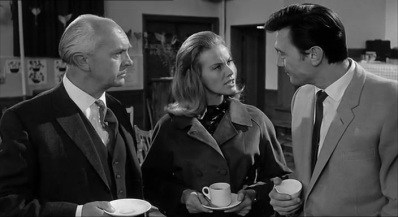 The other thread that runs through the film - but admittedly one that never drums up any great sense of drama or intrigue - is Joe's half-hearted, but successful, attempt to become a councillor (Tory of course, befitting his social standing); he clearly has little interest, but is pushed into it by his father-in-law and, surprisingly, George Aisgill, despite pressure from Norah - ever the investigative journalist - NOT! - and Labour councillor Graffham (George A Cooper, above) to come clean over some housing development or other where there may be some shady dealings going on.  If that sounds disinterested, that's because the film treats the issue in such a manner that we can't become engaged even if we were so inclined, and Joe's speech to the council, which is presumably meant to be a key scene, falls flat accordingly, even when we can see the background to his dissatisfaction, stemming from his contempt for his father-in-law: 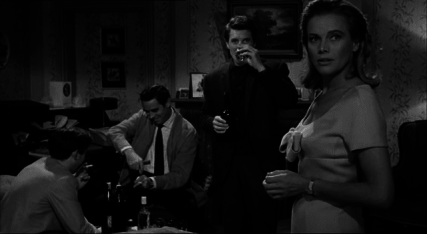 As Joe's world starts bringing his world crashing down around him, he decides to follow Norah to London, where he hopes to take up an offer made to him earlier in the film by Tiffield (Robert Morley), the boss of a company that Joe was sent to negotiate with, with Tiffield supposedly impressed by Joe's sales technique, but like so many before him he finds that being a big fish in the small pond of Bradford doesn't count for much in the big pond of London, either at Tiffield's company or with Norah's friends and colleagues; surprisingly, the interview scene doesn't feature at all in the book, where Tiffield's over of a job simply lapses due to Joe's inertia: 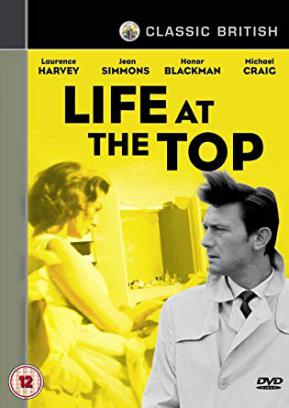 The film doesn't seem to feature much in histories or surveys of British cinema at the time - Robert Murphy only gives it a brief mention in his 'British Sixties Cinema' book, whilst Alexander Walker only mentions the film in a line in 'Hollywood, England' - and indeed I only saw it a few weeks ago myself via the aforementioned Talking Pictures TV, although I was interested enough to buy the DVD (right) for about £5.  If anything, Laurence Harvey's Bradford accent is even more pronounced than in the first film (surely he would have had his rough edges knocked off after 10 years of sherry parties and church-going?) but the film is well directed and shot (by Ted Kotcheff and Oswald Morris respectively, the former known more for this TV drama work and the latter very well respected in the industry, with films such as The Entertainer, Lolita,The Spy who came in from the Cold and The Hill amongst his credits).  A few scenes and moments do jar though; Joe is only standing for councillor, a position which I suspect drummed up as much interest then as now ie bugger all, so I hardly think that they would go to all the trouble of hiring a van and a megaphone to boost his vote, whilst a brief, unexplained return to Dufton, his birthplace, is completly superfluous.  Another strange scene, with Joe and Norah meeting up clandestinely in, of all places, Fountain Abbey near Ripon, features a shot or two taken straight out of some French or Italian arthouse movie.  Indeed, earlier in the film Susan expresses a wish to sell up and move to the south of France, so perhaps it was not so fanciful after all.

Not a great film, and maybe not a worthy successor to Room at the Top either; but surely worth more - a lot more - than a footnote to the history of the period; if nothing else it shows that, whilst others were running round Carnaby Street, photographing models and attending invitation-only art galleries in fashionable parts of London, film makers were still prepared to make adult dramas set (mainly) in the North, about recognisable people and their recognisable problems.