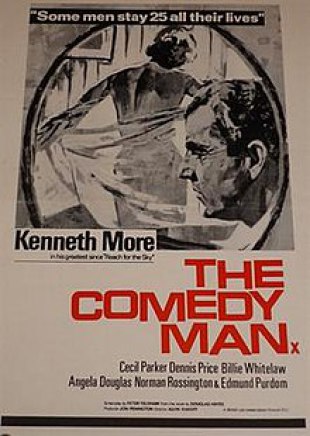 The strangely-named The Comedy Man (the main character is not a comedian) is a vehicle for Kenneth More, who had rather lost his way after his heyday in the 1950s when the mood and style of British films changed after the arrival of the New Wave films of the late 50s and early 60s, and as he was left with the 'tweed jacket and pipe' image his career faltered somewhat.  I haven't seen many of his films, not because I don't like him - he always seemed a pretty good actor to my untutored eyes - but because he tended to appear in the types of films - war films, innocuous comedies - that don't appeal to me. The Comedy Man is, along with The Greengage Summer - which I saw one afternoon about 30 years ago when off from school one day and thoroughly enjoyed) apparently his own favourite film of his, and I can see why.

Although More stars, the film is absolutely chocca with character actors and 'faces' of the time, including Billie Whitelaw, Angela Douglas, Cecil Parker, Dennis Price, Norman Rossington, Edmund Purdom, Frank Finlay, J.G. Devlin, Harold Goodwin, Ronald Lacey, Richard Pearson, Derek Francis, Freddie Mills, Gordon Rollings ('Arkwright in the John Smiths adverts) John Horsley ('Doc Morrissey' in the Reggie Perrin TV series), and even Jean Alexander, who already had a few years of playing Hilda Ogden in Coronation Street under her belt (or should that be under her hair rollers?)

More is 'Chick' Byrd, a jobbing thespian who, as the film opens, is starring in rep in the provinces but has just been sacked for sleeping with the producer's wife, which he announces to the audience at the curtain call, much to the consternation of the director who makes sure the curtain comes down, on the actors and of course on Byrd's career with the company.  So, he heads to London to say in an extraordinarily run down and decrepit property to stay with old friends: 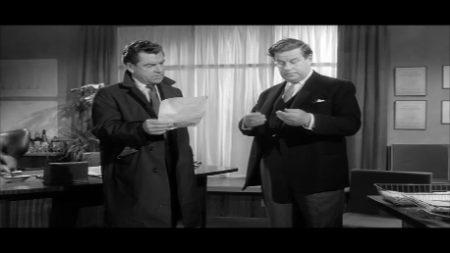 Chick soon runs into an old flame, Judy (Billie Whitelaw) and, after arriving late one night soaked and pissed, they go to bed together but the old arguments soon start again and he drifts off, aimless as usual.  He seems determined to hold to his own high standards; when he gets a job as a read over for a razor commercial through his agent Prout (Frank Finlay) he says to the advertiser (Richard Pearson, above) "Who writes this muck?" only to receive the indignant but inevitable reply "I do!".  The day is not wasted however, as he runs into an old friend, one of the hopefuls at the audition, Jack Lavery (Alan Dobie) and they go back to meet Jack's heavily pregnant wife, Sandy (Jacqueline Hill) but she is less than impressed to see Chick again, blaming him for Jack's continued failure to get jobs as an actor.

Julian (Purdom) is the first of the group to strike lucky, getting a screen test for a Hollywood film shot in Africa, but the moment he leaves Chick gets a break - of sorts:

He does get to meet up with Fay (Angela Douglas, later of course to marry More in real life, much to the consternation of many of his friends, as she was very much younger than him) but he still hankers after Judy, but it is evident that he is simply using Judy as back up if all else fails, and she is not prepared to play a bit part in his life, whilst Fay is not for him - "this is not going to be an intellectual relationship" he tells her at one point - but all his relationships do not disguise the lack of work and direction in his life.

Cecil Parker has a very good cameo as Thomas Rutherford (it feels like there should be a 'Sir' there) who, as an ageing and failed thespian, meets up with Chick and, without waiting to be asked (as a refusal often offends, presumably) moves in with Chick for 'a few days' which seems to stretch to weeks if not months.  Meanwhile Jack becomes a father, but tragedy strikes when, unable to find work to support his family, he commits suicide and, although Chick, badly shocked, goes round to offer his condolences to Sandy he is met with little more than recriminations and bitterness.  Ironically Jack had a job at last, and Chick, perhaps worried that he might end up the same way, decides he can't afford sentimentality and so goes to see Tommy Morris (Dennis Price), Jack's smarmy agent, to grab the job instead: 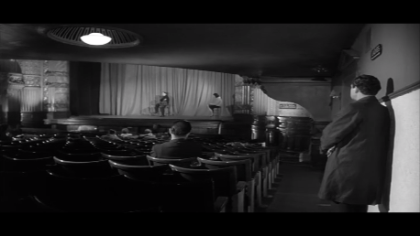 This turns out to be the turning point for Chick; he finds out that the company want to shoot 26 more Honeybreath commercials, and he becomes comparatively wealthy and famous in a way as 'The Honeybreath Man', although he is told by Tommy Morris about the extra work in one of the best scenes in the film, where he goes to see Morris who is sitting in on an audition.  Unthinkingly, but cruelly, he tells Chick that "this" - gesturing towards the stage, where hopefuls are auditioning with speeces from clasical drama - is "not for him", unaware, unlike us, the audience, that whilst watching one of the actors on stage performing a speech from Cyrano de Bergerac, he mouthes the words with the actor:

But to sing, to laugh, to dream

To walk in my own way and be alone, free

To see things as they really are, and yet

With all modesty to say

My soul be satisfied wtih flowers, with fruit, with weeds even

But gather them in the one garden

You my call your own

The sadness of this scene is then highlighted even further as the film jumps to Chick water skiiing in his next Honeybreath advert. 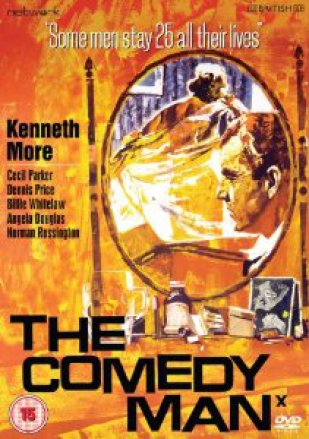 Judy makes up her mind to go back to provincial rep; as she leaves she remonstrates with Chick: "What do you want me to say, that you finally made it? " He cries out "For heaven's sake, for years I was a first-rate failure"  which brings the hurtful retort "And now you're a second-rate success" as her parting words to him.  Chick goes on to his own party, where Julian returns, a parody of himself, confirming as much in a reprisal of a standing joke in the film:  "I may look like a phoney, but don't let that fool you - I am a phoney" but it is when he puts his arm on Chick's shoulder and says 'Welcome to the club' that Chick's resolve seems to harden as to what he needs to do...

Currently available for only £4.19 from Network on Air in their sale, this is a engrossing, thoughtful drama which relies totally on More to carry it off, which he does splendidly.  Andrew Spicer's book 'Typical Men', looking at the different types of masculinity in British cinema, has More down as an 'Edwardian Hero Revised', ending by saying that his career plummeted after 1960.  Perhaps;  but The Comedy Man shows that there was a last hurrah for him nonetheless.