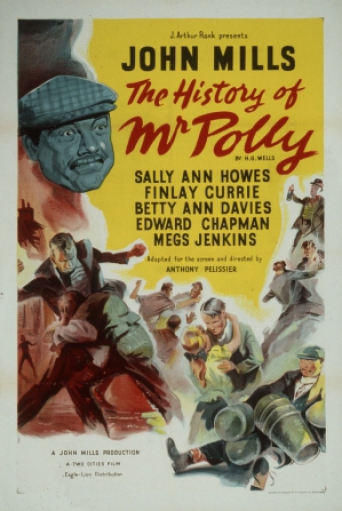 OK, so it was released in 1949, but it looks like a 1950s film, and it feels like a 1950s film, so it is a 1950s film, alright?  HG Wells might have had John Mills in mind when he wrote the book, as he fits the part like a glove.  Wells' social drama comedy was published in 1910, but I remember it very well as we did it at school, where the opening lines are etched in my memory:

It was a natural for Rank to adapt; at the time they were churning out safe, predictable adaptations of classic novels, which in the case of films such as 1947's Nicholas Nickleby pale in comparison to the Lean versions of Great Expectations and Oliver Twist; but The History of Mr Polly is perfect for this approach, with its light, gentle humour, albeit with a satirical touch.  Vaguely autobiographical, the film opens in September 1896 with our titular hero, played to perfection by Mills, working as a draper's assistant, although given that his head is stuck in a world of daydreams and books, this doesn't last very long, and indeed he is dismissed within the first five minutes of the film.  Eight months later, he is still looking for work when he receives news that his father is "dangerously ill" and on his return home his father (whom we never see) dies.  In this scene you can easily lose count of the number of character actors and actresses appearing, often in cameo roles, but see if you can spot Edward Chapman, Dandy Nichols (later to find fame of course as Alf Garnett's long-suffering wife in 'Till Death Us Do Part'), Irene Handl, Moore Marriott (best known as 'Arbottle in his work with Will Hay), Gladys Henson and even Doris Hare, again, like Dandy Nichols, to find fame on TV, in her case some 20 years later as 'Mum in 'On the Buses': 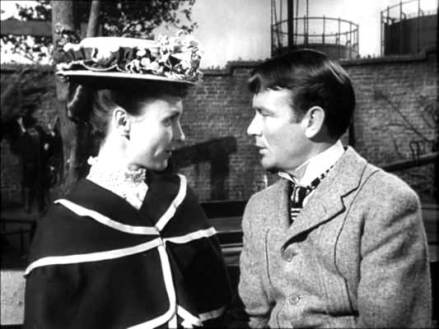 Polly meets up with his cousins, the Larkins, with Gladys Henson as his aunt and her three daughters Minnie, Annie and Miriam (the latter played by Betty Ann Davies).  Polly finds himself in the unusual postion of, firstly, being a man of leisure as he now has his father's money to fall back on, and secondly, of being in demand as a wit and raconteur with the three sisters as his undemanding audience, particularly as they compete to laugh at Polly's idiosyncractic wordplay, which I remember as being a feature of the novel.  Polly makes a fool of himself with Christabel (Sally Ann Howes) whom he meets on one of his bicycling jaunts, who sits on a wall of her school and plays up to his grand romantic notions of being a chivalrous knight rescuing a damsel in distress, but his illusions are shattered when he realises that she has invited an audience on the other side of the wall to laugh at him.

Sadder and wiser, he realises that he has to face up to his responsibilites, but first, before he can invest his father's money in a shop, it's high time he married.  All is set for him to propose to wide-eyed Minnie (Shelagh Fraser) but he loses his nerve at the last moment and playing his usual card for extracting himself from awkward situations - exclaiming "little dog!" and then making up a story attached to said animal as to why he has to leave urgently - finds himself walking out with the other sister, Miriam, and before he knows quite what has happened he has proposed marriage to the 'wrong' sister and been accepted!  They are married, and set for the fictional Fishbourne (based apparently on Sandgate in Kent) where Polly has rented a shop.

The film then jumps 15 years, and we see a very different picture of married bliss; in debt, with Miriam a careworn, haggard, nagging wife to Polly's ineffectual, daydreaming, reluctant shopkeeper.  After an argument with a couple of his shopkeeper neighbours, he sets off on his beloved bike to get out of things for a while, but accidentally falls off into the pots, pails and pans on the pavement of his ironmonger neighbour, played with relish by Wylie Watson.  This, it seems, is the final straw, and the following scene finds him contemplating his existence, although, as already mentioned, this is actually the first scene in the book: 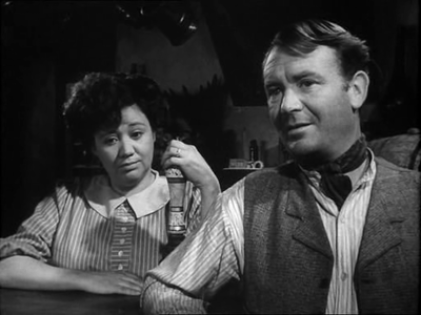 This time he really does set out to change his life, and two thirds of the way through the film becomes a wanderer, looking for - well, he's not sure, but when he comes across the Potwell Inn he instinctively knows he's found it.  He soon settles into a blissful existence with innkeeper Megs Jenkins (left), working as handyman and ferryman at the pub, with only the landlady and her niece, also called Polly (played by Mills' daughter Juliet) about the place.  Although there is one problem, as Polly explains; Uncle Jim.  Uncle Jim, it turns out, is the landlady's sister's husband, and young Polly's stepfather, a right bad 'un, who believes he has claim to the place and soon scares off anyone who tries to suggest otherwise, by making them 'scoot', as Polly takes delight in telling our hero. It isn't long before Mr Polly finds out for himself, as Uncle Jim (Finlay Currie, reprising his menacing appearance as Magwitch at the start of Great Expectations) introduces himself: 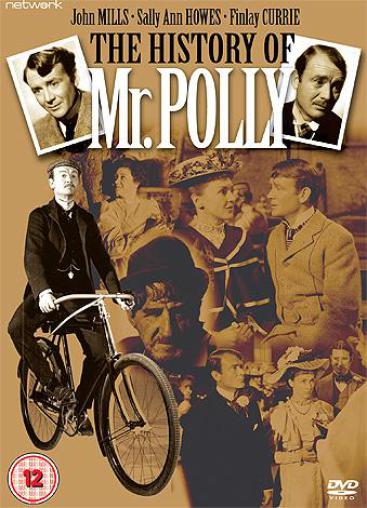 Uncle Jim is as good as his word, and in true Terminator fashion, does come back, but Mr Polly finds some backbone from somewhere and stands his ground.  If you don't know the film, or the book, I won't reveal the ending, but you know all will end well.  Like a lof of people, I have an image in my head of paradise, and it usually involves sitting in a pub garden, preferably in a riverside setting, as the sun goes down, with a pint of best bitter (probably a pint of Abbot's as served in the Crown in Gayton); this film, like certain scenes in Inspector Morse, satisfies that heavenly image.

Maybe not great cinema, certainly not a searing human drama, but very much of its time; a warm-hearted, comforting film, perfect for an afternoon's viewing on Channel 4, where much-loved character actors do their stuff and Mills above all captures the essence of Mr Polly.  Halliwell's Film Guide says of Lean's Great Expectations that it is "a superbly pictorial rendering of a much-loved novel, with all the famous characters in safe hands" and that last bit - "all the famous characters in safe hands" could be applied, in a way, to this film of a book I have very fond memories of.  The book itself can be bought quite cheap 'in all good bookshops', as they say, or even cheaper second hand, whilst the DVD is freely available, although my copy is part of the excellent-value John Mills Collection, mentioned before on this site I believe.

The image at the top of the page shows Megs Jenkins and John Mills at the Potwell Inn, with Mills preparing to fight off Uncle Jim.