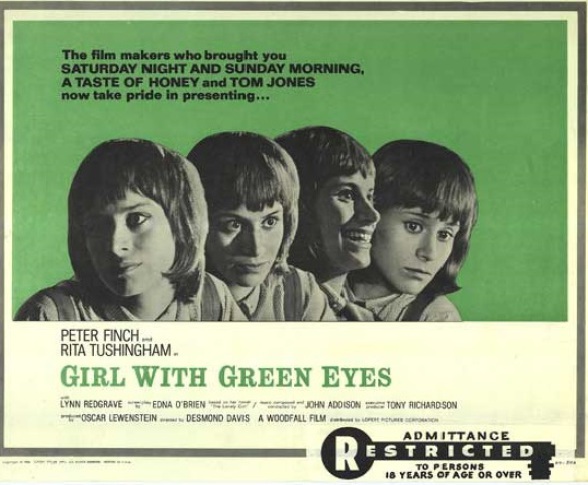 Girl with Green Eyes (there is no definite article in the title), released in 1964, was a Woodfall Films production following on from their huge commercial success of the year before, Tom Jones, and gave another starring role to the wonderful Rita Tushingham, who had of course made her name as Jo in A Taste of Honey, her film debut in 1961, another Woodfall film.  The director this time was Desmond Davis, who seems to have made a rapid promotion from camera operator in those two films and The Loneliness of the Long Distance Runner to debut director here; he would go on to make a very different film, Smashing Time, with his two leading ladies in this film, but the film for me evokes memories of two films in particular, I was Happy Here (because of its Irish setting and vaguely similarly main character, although possibly because it was also directed by Desmond Davis) and A Taste of Honey (obviously because of Rita's presence, but also because of the music by John Addison, who scored both films in a similar manner).  The film is an adaptation (by its author) of Edna O'Brien's novel The Lonely Girl published in the early 60s, about...well, let Kate Brady, the titular character, tell you herself right at the start of the film: 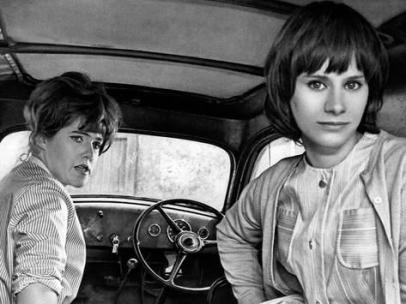 "Get in the back of the van!" - Redgrave and Tushingham

Baba Brennan is played of course by Lynn Redgrave in only her second film, and she contrasts nicely with the quiet, thoughtful, unsure-of-herself Kate (characterisations largely repeated, presumably deliberately, in Smashing Time) and it seems that this works well as she tends to drag Kate along with her, at least meeting young men and 'getting out there', as the kids say.  But when they meet mature, sophisticated writer (film maker in the book) Eugene Gaillard (Peter Finch) Kate is conscious that Baba's artless prattling is unlikely to impress him, and when the three of them meet again by chance she decides to seize the opportunity fate has presented her to try and get to know him better: 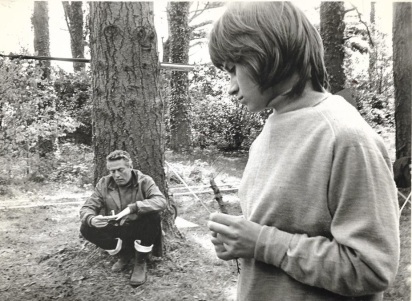 At first Kate's life doesn't really change; she sees Eugene at weekends at his isolated farmhouse outside Dublin, where he only has his redoutable housekeeper Josie (Marie Kean) to keep an eye on him, whilst continuing to work at the grocery store, but she gradually becomes aware that he has a past, which seems to slowly seep out in drips and drabs (on one occasion a friend, Malachi (Julian Glover, who also featured in I was Happy Here), tactlessly asks after Eugene's wife) but it then turns out that he is separated, with his wife, Laura,  in America indefinitely.  However Kate then finds some children's items under a bed, and it turn out that he has a daughter, which he somehow failed to mention...and so on.   For his part Eugene becomes frustrated when it tranpsires that Kate, a virgin, cannot throw off her Catholic upbringing and lose her deeply ingrained inhibitions and at first won't, or can't, allow him to make love to her; but before the couple can sort out their problems, Kate's father surprisingly intervenes in dramatic fashion: 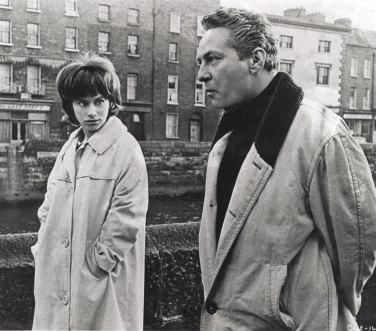 Although the scene above shows how, once back at the family home, the restrictions and limited outlook of her family become evident, but it takes an intervention from the local priest (T.P. McKenna, inevitable in a way that he would appear in an film at this time set in ireland, although in fairness the same thing could be said about Cyril Cusack, and he is nowhere to be seen here) to send Kate literally running off screaming back to Dublin and Baba, but she is inexorably drawn back to Eugene and ends up living with him; but although Eugene says that "you brighten up this hermitage" tensions and conflicts, centering on differences of age, religion and general outlook - soon start to surface, not least after her father and his cronies turn up demanding to know where Kate is (answer; hiding under the bed) in a semi-comic scene from the book that the film does full justice to.   One incident in particular causes Kate some anguish, when the aforementioned Malachi - who is clearly intent on making himself as unpleasant as possible - and his partner Mary (Laura's friend) come over and demonstrate, without really trying very hard, the gulf that we know exists between our ill-fated pair.  When Kate finds out - by the simple method of reading his mail - that Eugene has been sent an air ticket to New York by his wife, she demands some answers as to what he intends to do about the situation, but she is not without some thoughts, and actions, of her own on that subject... 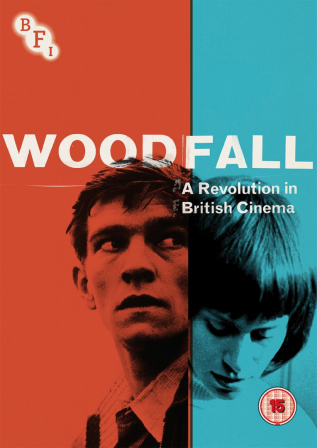 The ending, whilst melancholic in certain aspects, fills more like a natural closing chapter on one part of Kate's life, as she moves on, rueful rather than bitter.

The film's exteriors were shot in Dublin and Co Wicklow - Rita Tushingham, in the interview mentioned below, relates how John F Kennedy was in Dublin at the same time, which places the filming in the summer of 1963 (he was in Ireland for four days in June 1963) - which, like I was Happy Here, lends the film some authenticity, but I do wonder what would be said now if all the main roles - Kate, Baba, Eugene etc - were all played by non-Irish actors (and I can't comment on the accuracy of their accents) but presumably at the time it wasn't an issue.

Although I think the DVD was released some time ago, my copy now is part of the 'Woodfall - A revolution in British cinema' DVD that includes The Loneliness of the Long Distance Runner, Tom Jones, The Knack... and how to get it amongst others, along with numerous extras, which in this particular instance means an interview with Rita Tushingham on working on Girl with Green Eyes, and an interview with Desmond Davis on his time with Woodfall in the 60s.  Overall another impressive entry in Rita's 60s' CV.