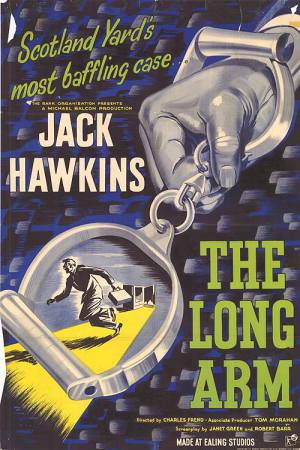 The Long Arm is Ealing Studios' 1956 tribute to the detective work of Scotland Yard, six years after their famous film The Blue Lamp, which put the spotlight on the 'bobby on the beat'.  Directed by Charles Frend, it was one of his last films for Ealing before they sold the studios two years later.  Frend had been with the studio since the war, having edited some of Hitchcock's 1930s' films such as Young and Innocent, and if he is remembered at all today it is as a director of stirring, patriotic films such as Scott of the Antarctic and San Demetrio London, although he also directed comedies such as A Run for Your Money.

Anyway, regular readers of this site (in the unlikely event that there are any such persons) will be aware that I am hardly a strong exponent of the auteur school of criticism, mainly becuase I have no idea whatsoever as to what makes a good director and couldn't tell one director from another; suffice to say that this is very much a Michael Balcon Ealing film starring that most reliable and comforting of actors, Jack Hawkins, who plays Superintendent Tom Halliday.  The story centres on a series of robberies of safes involving an unknown criminal who has no criminal record and therefore remains,until some way into the film, an elusive figure; the plot is interspersed with various scenes of home life, with Halliday's long-suffering wife Mary (Dorothy Alison) forever cooking him meals that go uneaten, and his son Tony, who also seems forever doomed to be let down as Halliday's work means him cancelling long-planned trips and outings.

As a police procedural, the film holds an endless fascination for me, as it (a) seems so remote from today's way of working and (b) leads me to question how 'realistic' it was even at the time.  For example, did Superintendents really do all the leg work on such cases?  Is it really likely that such a senior officer, acting on a hunch, would ring up his equally senior and experienced colleague at about 22:30, get him to agree to go back to the office, and then have the both of them still there at about 01:00 in the morning?  Hmmmm....   The film opens with a robbery which sets off the whole sequence of events:

This is still a world - on screen, at any rate - where the police and the villains all know each other, and where most of them play by the rules laid down before the war; it is interesting to note that Halliday is of the view that had the regular beat bobby gone to the robbery, rather than the 'Q' car, he (bound to have been a he) would have known the nightwatchman.  Can you imagne that now?

A chance remark from his son leads Halliday to follow a hunch of his, that the culprit has committed a number of other offences, but just not been caught, which is when he rings up Chief Supt Malcolm (Geoffrey Keen), who is in charge of what used to be called the collator's office, and they plough through likely links and suspects, coming to the conclusion that their man - referred to as 'chummy' throughout - robs only from Rock safes, made by a company in Chester.  Younger readers/viewers might scoff at the card index system in place, but to be honest it's not that long ago that we all still relied on such methods before the arrival of databases. 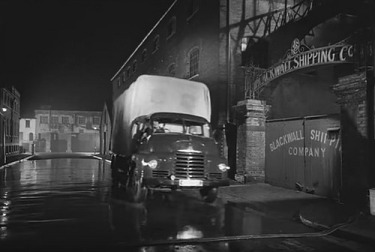 Before they can develop this crucial new lead, 'chummy' strikes again, only this time he is seen coming out of a shipping company's warehouse by a passer by, Stanley James, on his way to work (played by Ian Bannen) and the unseen getaway driver runs him over as they make their escape.  James is fatally injured, and can only give the briefest and most general description to Halliday before he dies.  The case is now one of murder, so matters start to escalate rapidly from here on in, with a priority for Halliday and his Sgt sidekick Ward (John Stratton) being to find the getaway car:

These scenes are the best in the film in my view, as they show a logical, methodical approach to the problem, which is far more realistic than the approach of most detective films and TV programmes, where usually the crime is solved by an eccentric but brilliant detective who finds inspiration whilst sipping bitter in an Oxfordshire village pub.

Having narrowed down the field in their attempts to find who left the newspaper in the car, our intrepid duo head off to North Wales and a memorable encounter with local garage owner Mr Thomas (Meredith Edwards, like so many an Ealing regular, in fact he featured in The Blue Lamp): 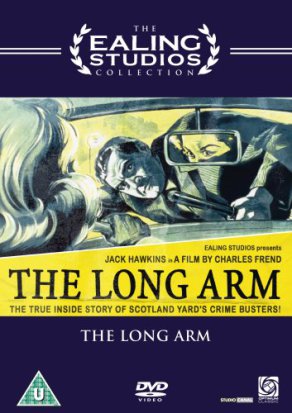 Having now managed to trace 'chummy', the rest of the film falls into place as Halliday and Ward make the necessary links between Gilson and his partner, the getaway driver, culminating in a climatic scene at the London Festival Hall where Halliday gets rather more involved than he would have liked.

The film was more or less remade two years later, by John Ford of all people, as Gideon's Day, again with Jack Hawkins as the eponymous copper (a DCI this time) who tries to balance his home and work life during the course of just one day.

The film has been available on DVD for some years now, so should be available quite cheaply although a cursory look shows that it's still about £8 or more, best to get it in an Ealing box set I would have thought.  As so often, there is also the incidental pleaure of spotting so many character actors of the period; along with the aforementioned Geoffrey Keen keep an eye out for Sydney Tafler, Nicholas Parsons, Sam Kydd, Glyn Houston, Alec McGowan and Harold Goodwin amongst others.

50s British films are still often maligned - reading some histories, it would appear that nothing much happened between the golden age of the 40s and Tony Richardson making Look Back in Anger -  but don't believe it for a minute.  There were plenty of crafted, thoroughly enjoyable films like The Long Arm around, and I hope to continue to highlight many more of them in these pages.