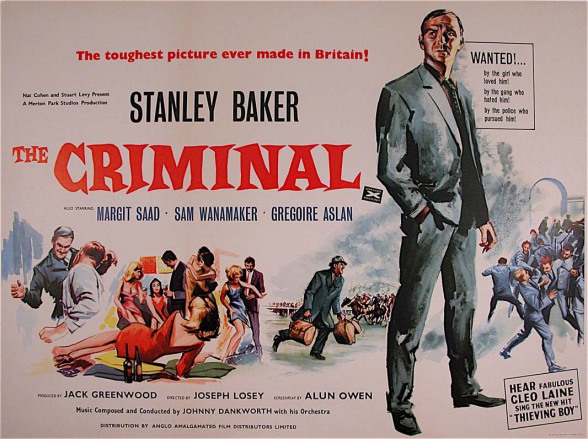 The Criminal, directed by Joseph Losey and starring Stanley Baker, has been difficult to get to see up until recently, but has now been released on DVD so should get a higher profile.  It is a key film in the ouevre of Stanley Baker (see my page on Baker, called 'both side of the law', on this website) but perhaps it is not unfair to say that despite some memorable scenes and shots, overall actual close viewing reveals that it doesn't quite match up to its reputation.  As the film opens we see Kelly (Kenneth Cope, of 'Randall and Hopkirk Deceased' fame) being booked back into prison; it seems that his arrival is keenly awaited by many, not least Baker's character, Johnny Bannion, an Irish criminal in prison for an unspecified crime, as Kelly is a noted snitch: 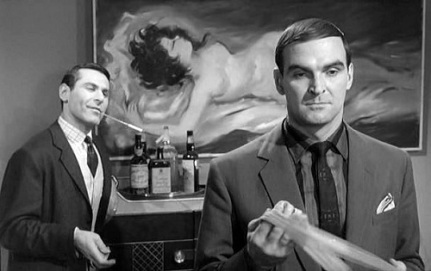 Mike Carter (Sam Wanamaker) gives Bannion something to think about

The actual picture on the DVD is very good (the cinematrographer was Robert Krakser, most famous for Odd Man Out and The Third Man) it's just that for some reason the picture is rather squashed when turned into a media file.  Bannion is duly released the next day, and meets up immediately wtih Mike Carter (Sam Wanamaker, right) as Bannion has already planned his next job based on information from Snipe (John Malloy, seen in a cell with Bannion in the last scene).  Carter's relationship with Bannion is uncertain, and it is not clear who the dominant person in the relationship is, and Carter's frequent references to 'our mutual friend from Highgate' who is the distributor and also providing funds for the job suggests that Bannion is rather less central in the overall scheme of things than he would like to think himself.

Although it would have made it a more ordinary film, it is perhaps regrettable that the plot didn't just stick with the old 'crook gets out of prison, pulls job' line, but Losey is more interested in the peripherals and in my view this slows the film down and makes for some unrewarding viewing.  A party is held for Bannion that evening, where his old girlfriend Maggie ((Jill Bennett) makes an unwelcome appearance and causes a scene; Robert Murphy memorably writes that she "looks as if she has drifted in from a Continental art-house movie" and Margit Saad's Suzanne, who stays behind after the party to be with Bannion, is rather implauisble as a gangster's moll.

The job turns out to be a race course robbery, which brings back memories of Kubrick's The Killing, but what should be the centre piece of the film is almost deliberately thrown away in just a few minutes, as the next clip shows.  I was left wondering why they took the annoying man to the station (not really the actions of a gang of robbers), what happened to the taxi and how Bannion got to his other car, and why he would bury the money in broad daylight:

As demonstrated in the clip above, the score is by John Dankworth; now Dankworth is a matter of taste, but I must admit I can't stand the music in the film, it's usually inappropriate and very jarring, and for me very much detracts from the action.  Anyway, it isn't long (about an hour as far as I can see) before Bannion is back in police custody, having been fingered for the job by Maggie and AN Other.  The first time I watched the film Bannion seemed so unperturbed by this arrest that I thought it was all planned by him anyway, but as this clearly makes no sense I gave up on that idea, however it certainly suggests that he is hardly a master criminal. 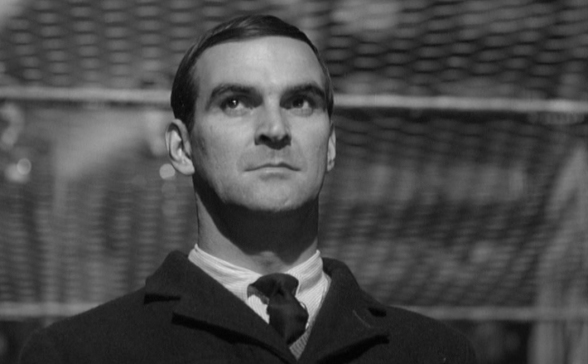 The film works much better, and is much more interesting, when Bannion is behind bars (indeed I read somewhere that Losey wanted to set the entire film in prison, but that idea was knocked on the head by the studio).   Back in the same prison, but on a different wing, the power relationships seem to have shifted almost imperceptibly, with Bannion now in thrall to the prison 'genial Harry Grout' figure, Frank Saffron (Gregoire Aslan, below on left), an Italian Mr Big, who first arranges for him to get back onto B wing, with Barrows manipulating events behind the scenes, placing Bannion in with two Irish hard cases (Neil McCarthy and Tom Bell) in the hope that he will get a good beating (it ends up the other way round).  We are used to unflinching portraits of prison life now, with corrupt prison officers, organised crime gangs running prison wings and routine intimidation of inmates, but at the time this was new and daring, and very much part of the move towards a more cynical view of the criminal justice system, particuarly the police (although the police themselves don't feature in The Criminal). 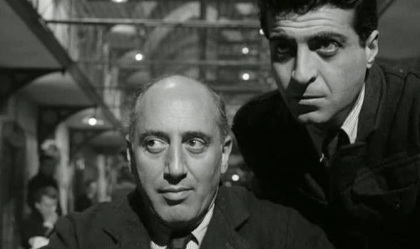 Bannion wants out, but he finds out that it will cost him the whole £40,000 that he got from the robbery to do so (which, when you think about it, makes no sense - there were a number of others involved, such as the driver Quantock ((Tome Gerard), Ted (Nigel Green) and Chas (Larry Taylor), so Bannion is in no position to promise such funds, and in any case, I suspect that the sum of £40,000 in 1960 to arrange an escape from prison is, how shall I say, rather overpriced to put it mildly?).  Bannion finds himself caught up in events at the prison, which, unbeknown to him, have all been orchestrated by more powerful forces: 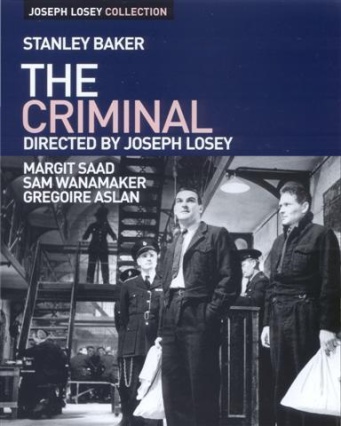 Once out, Bannion finds that he is caught up in betrayal and a world which is leaving him behind, with 'organisation' the watchword and little or no room for maverick individuals like him; a similar portrayal of the rise of organised crime was to come a year later in The Frightened City, another film written about on this website.

As so often, good fun to spot so many familiar faces, with Murray Melvin in a small role as the strangely named Antlers, Kenneth J Warren as the aptly named Clobber, along with Nigel Green, Edward Judd, Noel Willman as the tea-sipping governor and the silent but menacing Larry Taylor as Nigel Green's mate Chas (shame Nigel Green's character wasn't called Dave, but you can''t have everything.)

Although Dankworth is not for me, his missus Cleo Laine also features, singing the theme song 'Thieving Boy', whcih works well, and Losey of course employed Dankworth and Laine again in The Servant a few years later.  Although previously available as part of a Joseph Losey collection box set, the film is now out on DVD in its own right, my copy is as above except that the title and sleeve notes are in Dutch for some reason.  The DVD comes with the original trailer and a 30 minute French feature on Losey and the making of the film.