STANLEY BAKER - BOTH SIDES OF THE LAW 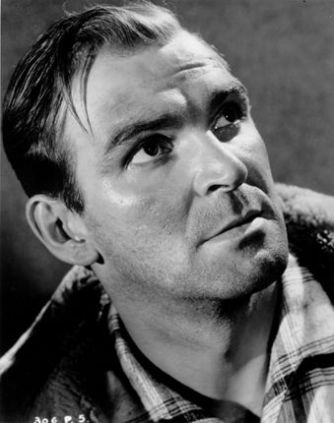 Stanley Baker (1928 - 1976) was the actor who best fitted the role of 'Tough Guy' in the late 50s and 60s; although he appeared in a wide range of films, from action adventures through historical dramas and big international spectacles (his most famous film surely remains Zulu)  it is the 5-6 films he made, from The Good Die Young (1954) through to Roberry (1967), including Hell Drivers, Hell is a City and The Criminal, that are his most enduring legacy.

Born in the Rhondda valley in Wales, he was the son of a miner and remained a staunch Welshman (although not a nationalist, as he was keen to explain in interviews) and socialist all his life.  he died absurdly young, at the age of 48, from cancer (he was a heavy smoker all this life), but told his wife: "I have no regrets. I've had a fantastic life; no one has had a more fantastic life than I have." 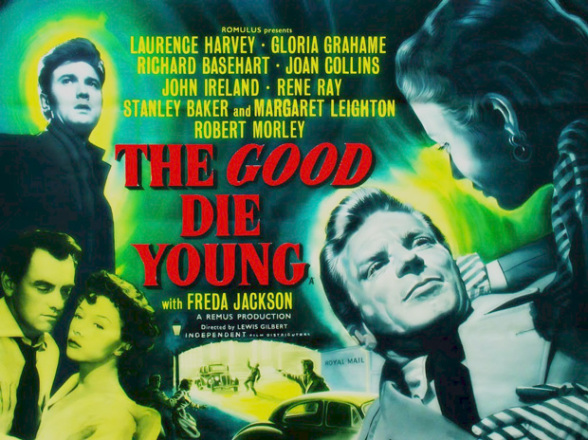 The first film where Baker was able to start demonstrating the persona for which he became best known is 1954's The Good Die Young, a predictable but very enjoyable crime caper film, with Baker, John Ireland, Richard Baseheart and Laurence Harvey playing four very different characters who are all brought together by their desperate circumstances and then manipulated and led to disaster by Rave (Harvey).  The format is the then-common one of looking at each character in turn in portmanteau fashion, with the most memorable story being that of Baker's character, Mike Morgan, a boxer who loses his hand after fighting on when it has been damaged, only to find that his plans for the £1000 he had saved up for his retirement have gone wrong: 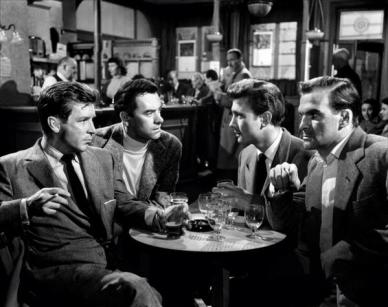 Baker's character in this film is the most obvious forerunner of his more celebrated roles; Morgan is clearly a tough character who has been through a lot as a boxer, but he remains an honest, salt-of-the-earth bloke who falls into crime,as do the others, through desperation when they see an easy way out of their difficulties.  In Baker's later 50s films he is often on one side of the law or the other from the outset, although in Hell Drivers he is still the tough but essentially honest 'type'. 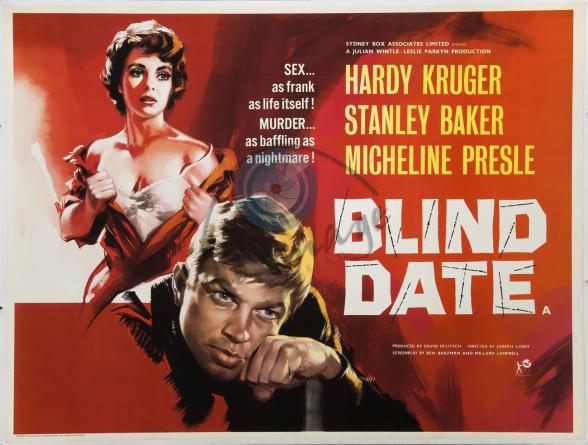 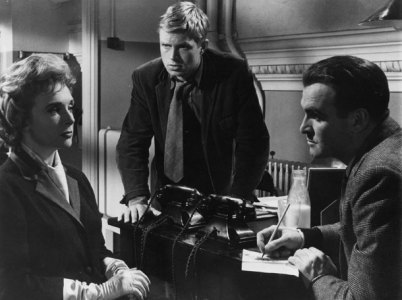 Baker's first major role as a police officer was in Basil Dearden's Violent Playground in 1958, but I've written about that film, albeit briefly, on the current (Dec 2014) home page, so I'll move on to his next role, that of inspector Morgan in Joseph's Losey's Blind Date.  It's difficult to say how much I dislike this film, although it's probably in inverse proportion to the amount of praise heaped upon it, and on Losey's direction and general vision, around which reams and reams have been written.  Maybe it's me, and I just don't get it, but I feel that there is a strong element of Emperor's New Clothes about Losey. 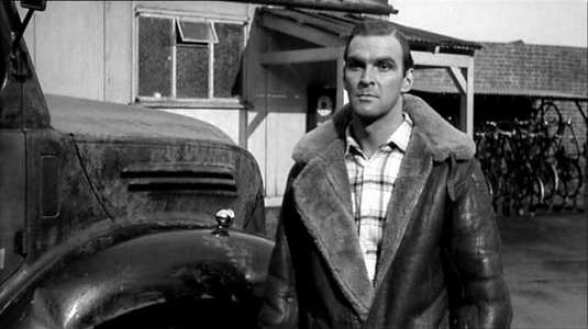 Baker as Tom Yately in Hell Drivers, one of his most iconic roles 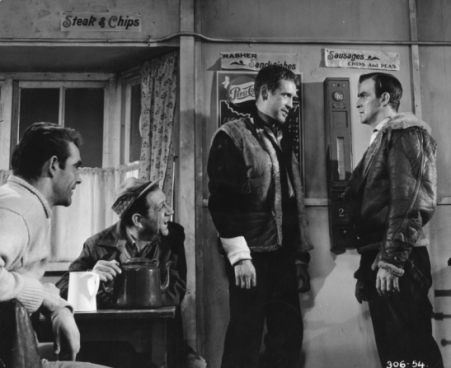 It was really Hell Drivers, directed by Cy Endfield in 1957, that set the seal on Baker's persona and personal stardom.  An ex-convict, he wants to go straight as a truck driver but comes up against the leader of the team, Red (an incredibly malevolent and unpleasant Patrick McGoohan) who makes no secret of the fact that he is top dog and nobody is going to challenge him.

Andrew Spicer, in his book 'Typical Men: The Representation of Masculinity in Popular British Cinema', defines this type as the 'Modern Tough Guy'.  Spicer argues that in both this film and a film I haven't seen, Sea Fury,:

Baker is presented as a young man on the threshold of adult life who has to undergo a series of initiations into the brutal male culture from he stands apart in courage, determination and sensitivity.  His sensitivity comes from the need to exorcise past failures.

This scene shows Baker attempting to get a job, as he becomes aware of the tough, no-quarter-given world he finds himself in: 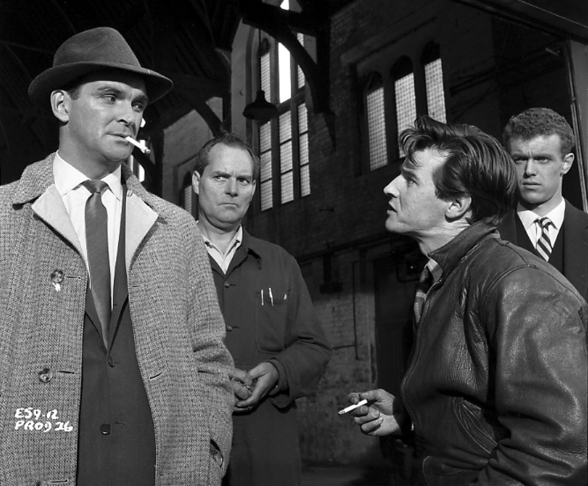 Baker had played a tough police officer in 1958's Violent Playground, and he had two more key roles in the late 1950s playing police officers, Blind Date and Hell is a City, but his characterisation in these films, in contrast to the Dixon of Dock Green/Jack Hawkins style of detective that usually populated these films, showed a more troubled and morally ambivalent police officer that perhaps was inevitable after the 'copperolatry' of the previous decade.  In Hell is a City for example it is made clear that in some respects he and the main villain, Starling, are two sides of the same coin, and his home life is in very stark contrast to that portrayed in films such as The Long Arm and Gideon's Day of only a couple of years before: 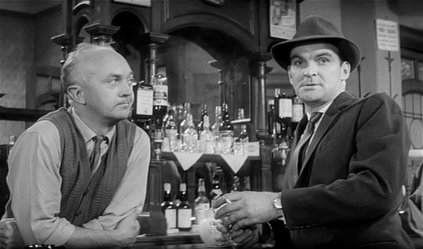 Hell is a City is often now regarded as one of the key films of the New Wave period, and certainly is a landmark film in its ambivalent view of the role of the detective and his relation to the community which he serves/polices.  For me though its central 'two sides of the same coin' theme in terms of Martineau and Starling is never fully developed, and I have always felt that John Crawford, who as an American actor is completely miscast anyway, gives a highly forgettable performance in any case.

A far stronger case for the pivotal film of the period in terms of Baker's CV can be made for The Criminal, in which Baker returns to playing (guess what?) a criminal. 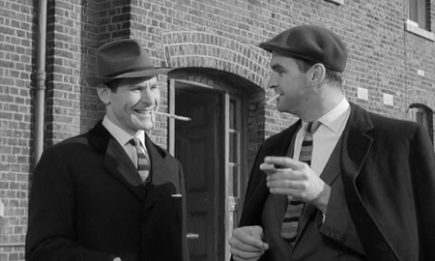 After playing another detective in Joseph Losey's Blind Date in 1959, a year later he teamed up again with the American director for The Criminal, in which this time he is firmly on the wrong side of the law as the titular character, Johnny Bannion.  I've now (Feb 2017) written about this film in the 'Unsung films' section of the website, so I'll be brief here. 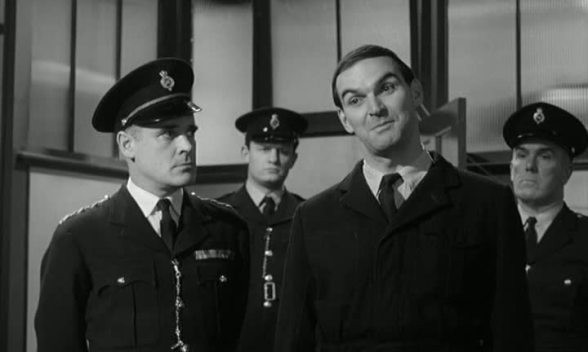 Bannion looks very sure of himself , but Chief Warder Barrows (Patrick Magee) is not impressed.

Losey apparently wanted to set the whole film in prison, but he was overruled by the film's producer; instead as the film opens we find Bannion in prison but about to be released.  When he is he's met by Mike Carter (Sam Wanamaker) and almost immediately plans another job, although there is little build up to it and it forms only a minor part in the Someone snitches to the police and Bannion is caught but not before he hides the money in a field, its location known only to him.

Whilst clearly a hard, unyielding character with an underlying sense of violence - Bannion was based on real-life gangster Albert Dimes - he is contrasted with the sadistic warder Barrows (Patrick Magee) in what is a reasonably sympathetic look at the criminal's motives. 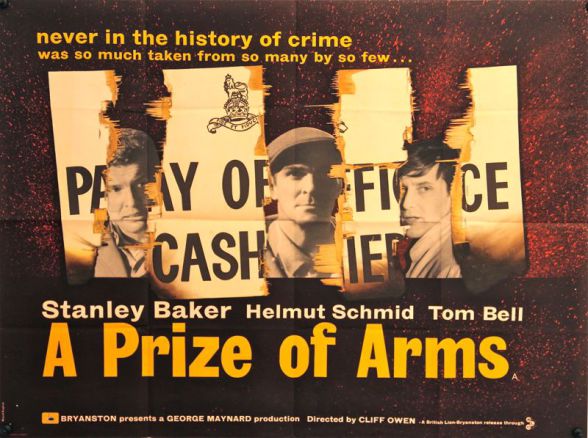 This 1962 heist drama also stars Tom Bell (Fenner) and Helmut Schmid (Swavek, although it sounds as though Turpin calls him 'Coln, or 'Colm' throughout) as three criminals setting out to rob a safe - the difference is that the safe is in the pay office of an army camp...

We follow their audacious plan from the night before to the day of the robbery itself, and the film (directed by Cliff Owen) maintains and builds tension and suspense nicely. As this is the 60s, you know that 'crime doesn't pay' but this doesn't stop one's enjoyment and of course hoping that they get away with it.

This I think is one of Baker's key roles of this period, ably supported by Bell as the flaky Fenner and Schmid as the calm, reliable Swavek. Possibly uniquely, there is not a single female role in the whole film, but there are a host of familiar faces in minor roles, although it is rather ridiculous for the DVD to put on the cover 'Stanley Baker, Tom Bell, Patrick Magee, Rodney Bewes and Fulton Mackay in A Prize of Arms' when Magee has a minor role, Bewes is in the film for about 10 seconds and I didn't even notice Fulton Mackay, so fleeting must his appearance have been. I did enjoy a cameo by Stephen Lewis ('Blakey' from 'On the Buses') as a nosey parker corporal though.

Here is the scene where the trio carry out the actual robbery, having earlier in the day replaced the fire extinguishers with petrol-filled ones and turned off the main alarm: 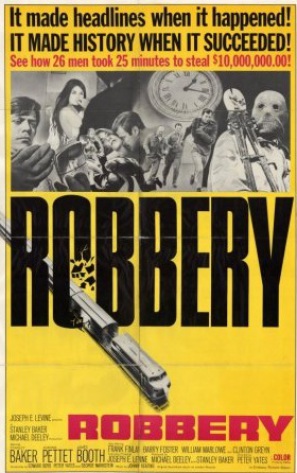 One of the last (actually, the last) crime film of the 1960s, before it was taken up again briefly in the early 1970s, Robbery was a thinly disguised account of the great Train Robbery of 1963, with Baker playing Paul Clifton, the leader of the gang.  Apparently the actual robbery sequence was based to the last detail on court evidence at the original trial, but the rest is completely fictionalised.

I was interested to read that an American boss was in the screenplay to help boost the film's chances for the US market, but although these scenes were shot (with Jason Robards) they were left out of the final version; it's a shame that they have not been put back in as a 'director's cut' now for DVD.  I also read on wikipedia that George Raft was supposed to be in the film but got refused entry into the UK!

This film certainly set the style of many a TV cop series in the 70s, particularly The Sweeney, and Peter Yates, the director, got hired to direct Bullitt at Steve McQueen's request after the latter saw Robbery.   There is a famous, and exciting, car chase sequence at the start of the film, but this clip shows Clifton getting his team together for the big job: 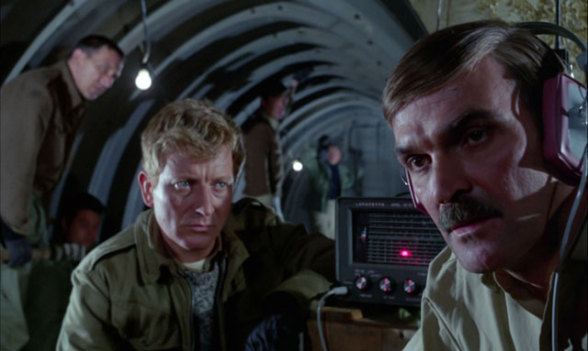 There are some memorable scenes as the gang hide out in an underground bunker, but crime still didn't tend to pay in those days, although Clifton himself manages to stay out of the reach of the law at least for a time.