In terms of length, this could be a B movie, as it's only 69 minutes long, but it feels like a major film to me.  As suggested by the (terrible - why did they have to have a drawing instead of actual images from the film?) poster aside, it is a film about betrayal, but in a way it's really about (torn) loyalties, friendship (or comradeship if you prefer) and the lure of money over duty.

The film was written by Peter Barnes, who also wrote the screenplays for Violent Moment, Breakout and Ring of Spies in the late 50s/early 60s, as well as being a successful playwright, and directed by Cliff Owen, who went on to direct A Prize of Arms as well as the comedy The Wrong Arm of the Law, although sadly things went downhill from there, directing the two dreadful Morecambe and Wise 'comedies' in the 60s, and bawdy, tedious rubbish like No Sex Please...we're British in the 70s.  It stars William Sylvester and Mai Zetterling, the latter having made her name in the UK in Frieda (as a German, although she was Swedish) nearly 15 years earlier.  Sylvester was an American actor, it was very typical at the time to have an American in B movies and second features, in order to target the lucrative US market, although personally I've never understood why they would buy films featuring actors who by definition weren't stars in their own country.

The following sequence follows directly after the opening credits; all we've learnt so far is that an undercover police officer has been killled in the line of duty:

Layton, now officially Steve Ross, starts to put the word out that he is looking for contacts, and is soon put in touch with Johnny Hemick (John Mellion), who in turn introduces him to James Dawson (Anthony Dawson, best known for playing the would-be killer in Hitchcock's Dial M for Murder).  It is at this point that the film becomes really interesting, not to say outright unusual, as Dawson outlines to Layton the basis of their operation, which in short is rather forward-thinking, treating gang members as employees, backed up by perks, benefits and, if possible, pensions: 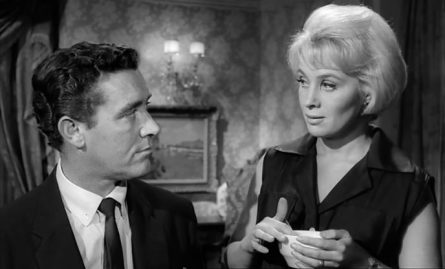 Perhaps inevitably, Layton becomes involved with Ruth Lombard (Zetterling, right), one of the group, one of whose first comments refers to a TV crime programme they all start watching; in reply to Johnny's comment " I wouldn't mind if they showed the underworld as it really was" she says "But then they would have to show criminals as ordinary people trying to make a living, and the public would never stand for that".  This sums up the key theme of the film; are criminals really a race apart, or are they indeed ordinary people trying to make a (dishonest) living?

Layton starts finding himself torn between his undercover role and the tight knit team that have accepted him, although it is hard to gauge how genuine his feelings are for Ruth; is that part of his subterfuge?  We, the audience, get an inkling of his views when DI Adams (Victor Brooks) turns up at Layton's flat, contrary to the agreement that Layton will call him if he needs to; Adams is an old-fashioned copper with fixed, traditional views, who fimrly believes that criminals have "no trust, no honour, just greed, that's their only motive", but Layton is already forming other views. 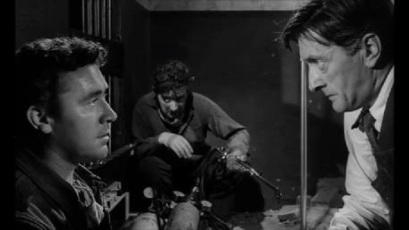 Layton's feelings towards his new-found chums is bolstered by the atmosphere and team bonhomie of the gang as they get down to work, tunnelling their way into the jewellers, with Neil McCarthy as Leo (whom we had seen earlier in the film playing pool with Johnny) and Harry Baird as Gill (Baird memorably played Johnny Fiddle in Sapphire two years earlier).  This scene shows that, far from being portrayed as backstabbers, who are simply waiting to betray each other so they can get their hands on their loot, this team work together and support each other in a way which reminds me of a platoon's wartime exploits: 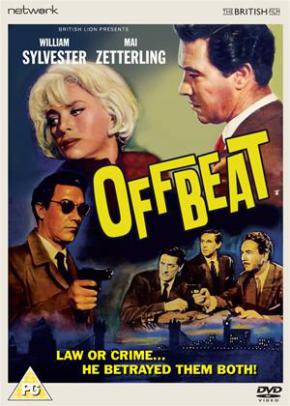 The scenes as the gang move closer to their goal of the safe are as tense and exciting as one would wish, but the big question is: what is Layton going to do? Does he really care for Ruth, or is that just his training kicking in; and is he really going to betray Dawson, Johnny and the others?  When I've watched the film before, I wasn''t sure, but having just watched it again prior to writing this page the clues are all there as to his real intentions, but I won't give the game away.

Unsung and overlooked, this is a really impressive and memorable early 60s crime film - and I've seen an awful lot of early 60s crime films  - which may have been forgotten about due to its relatively short length; it certainly can't be because of its performances and script, which are top notch.  The DVD can be bought from Network on Air for £3.87 at the moment (June 2018) which is an absolute steal.